Even a minor brain injury might raise your risk. 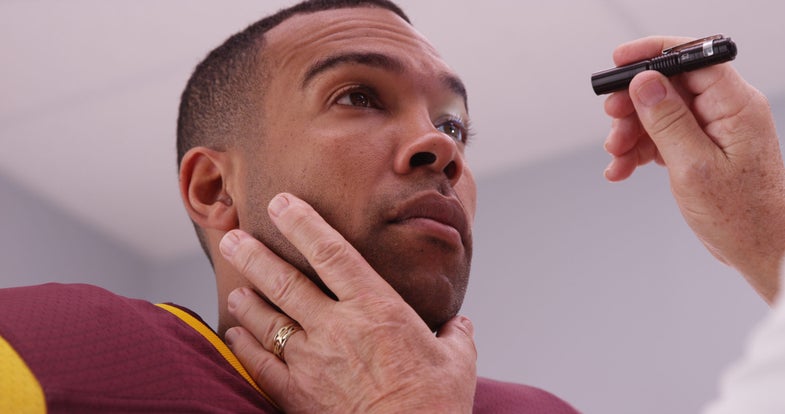 While the link to Parkinson's is still murky, it's becoming quite clear that it's important to protect your noggin from even minor injuries. DepositPhotos
SHARE

A new study published in the journal Neurology is making waves for suggesting a single traumatic brain injury (TBI), even a mild one, can significantly increase the risk of developing Parkinson’s disease.

The new study, spearheaded by a group of researchers at the University of California, San Francisco, found that the increased risk was contingent on how severe the brain injury was, but even a mild brain injury raised the likelihood of Parkinson’s by as much as 56 percent. The UCSF team argues it’s the biggest evidence to date connecting mild traumatic brain injuries—which often come in the form of concussions—to Parkinson’s, and follows in the footsteps of what the team had found in prior research.

That’s a staggering assessment when you consider that each year, 42 million people worldwide are thought to sustain a concussion.

Doctors have spent centuries studying Parkinson’s, a neurodegenerative disorder that disrupts the nervous system and affects motor control. Yet the underlying causes are still largely unknown, although most research points to a complex web of genetic factors (15 percent of diagnosed individuals have a family member with Parkinson’s as well) interacting with environmental factors. We do know Parkinson’s is more common in men, and the incidence increases with age—the disease afflicts 1 percent of the population over 60, and 5 percent of the population over 85.

At the beginning of the study, none of the veterans exhibited signs Parkinson’s or dementia, although roughly half had already sustained a brain injury of some kind. Of the 1,462 who were diagnosed with Parkinson’s before the end of the 12 year span of the study, 949 had previously sustained a TBI. After controlling for age, prior health conditions, and other factors, the researchers deduced a mild TBI raised the risk of Parkinson’s by 56 percent, while a moderate-to-severe injury increased the risk by 83 percent. Any kind of TBI led to a 71 percent increased risk for Parkinson’s.

Moreover, for those with a history of any brain injury, Parkinson’s disease was diagnosed, on average, two years earlier than those who had not.

Off the bat, the findings sound quite alarming. But there are some important caveats to unpack. “With a paper like this, you see so many media outlets blowing up this headline that says ’56 percent increased risk of Parkinson’s,’ says Kristen Dams-O’Connor, a neurophysiologist and the director of the Brain Injury Research Center at the Icahn School of Medicine at Mount Sinai in New York. And while the relative risk numbers look high, “the overall risk of developing Parkinson’s is [still] really small,” and the absolute risk of developing Parkinson’s only jumps from 0.2 percent to 0.3 percent between uninjured and injured individuals.

“This should absolutely not be interpreted in any indication that substantial proportions of people living with a mild TBI are expected to develop Parkinson’s,” she says.

Dams-O’Connor also thinks the UCSF team’s ascertainment of TBIs in participants was “far from ideal. When you rely on medical health records, you are, by definition, missing a lot of traumatic brain injuries.” Someone might sustain a mild TBI and not seek or receive any kind of medical attention, which means no one would document it. Many veterans elect to seek care outside the VA health system, so even if a TBI is diagnosed, the VA won’t necessarily know to record it. “I think it’s safe to say, for this study, they’re dealing with a real undercount of traumatic brain exposure,” she says.

On the other hand, Dams-O’Connor notes, this undercount would actually bias the results toward finding no relationship between TBIs and Parkinson’s, so it says something that the UCSF researchers found a relationship in spite of this limitation.

The sheer size of the research sample for this sort of investigation is quite unprecedented, and impressive, but veterans themselves may possess a risk profile that differs significantly from the general population. It’s probably safest to generalize these findings only to veterans, though it’s pretty reasonable to predict subsequent studies would extend the conclusions to the general public.

All that being said, “I do think this paper was really well done,” says Dams-O’Connor. “This is a cool study, and the authors were quite fair in acknowledging its limitations.”

One of the biggest mysteries this study raises is what exactly would link TBIs and Parkinson’s. “We don’t know for sure,” says Dr. Kristine Yaffe, a professor at the UCSF School of Medicine and a coauthor of the new study. “But almost all of these age-related neurodegenerative disorders, from amyotrophic lateral sclerosis (ALS), to Alzheimer’s, to Parkinson’s, have as their hallmark the accumulation of these abnormal proteins in the brain. We think, the longer you live, the more time these proteins have to accumulate.”

Yaffe and her team believe “there’s something about traumatic brain injury that either serves to accelerate that process, or make the brain more vulnerable to those proteins when they’re there.”

In Parkinson’s, that protein is alpha-synuclein, a key component of larger protein aggregates called Lewy bodies. Dams-O’Connor and her colleagues published a paper in 2016 that found people with a history of traumatic brain injury were more likely possess Lewy bodies in the brain, suggesting a potential mechanism that warrants further investigation.

There’s virtually no question these days that brain injuries, even mild ones, can inflict long-term effects on the brain, and the study arrives alongside a spate of new research demonstrating how much football players suffer at the hand of repeated concussions. While nobody with a brain injury should think they’re now bound to develop Parkinson’s later in life, the new findings are another sharp reminder to, if I can paraphrase the Wu-Tang Clan for a second, protect ya head.