That new study saying masks might not be effective? It has a few caveats.

Yes, you should still be wearing a mask. 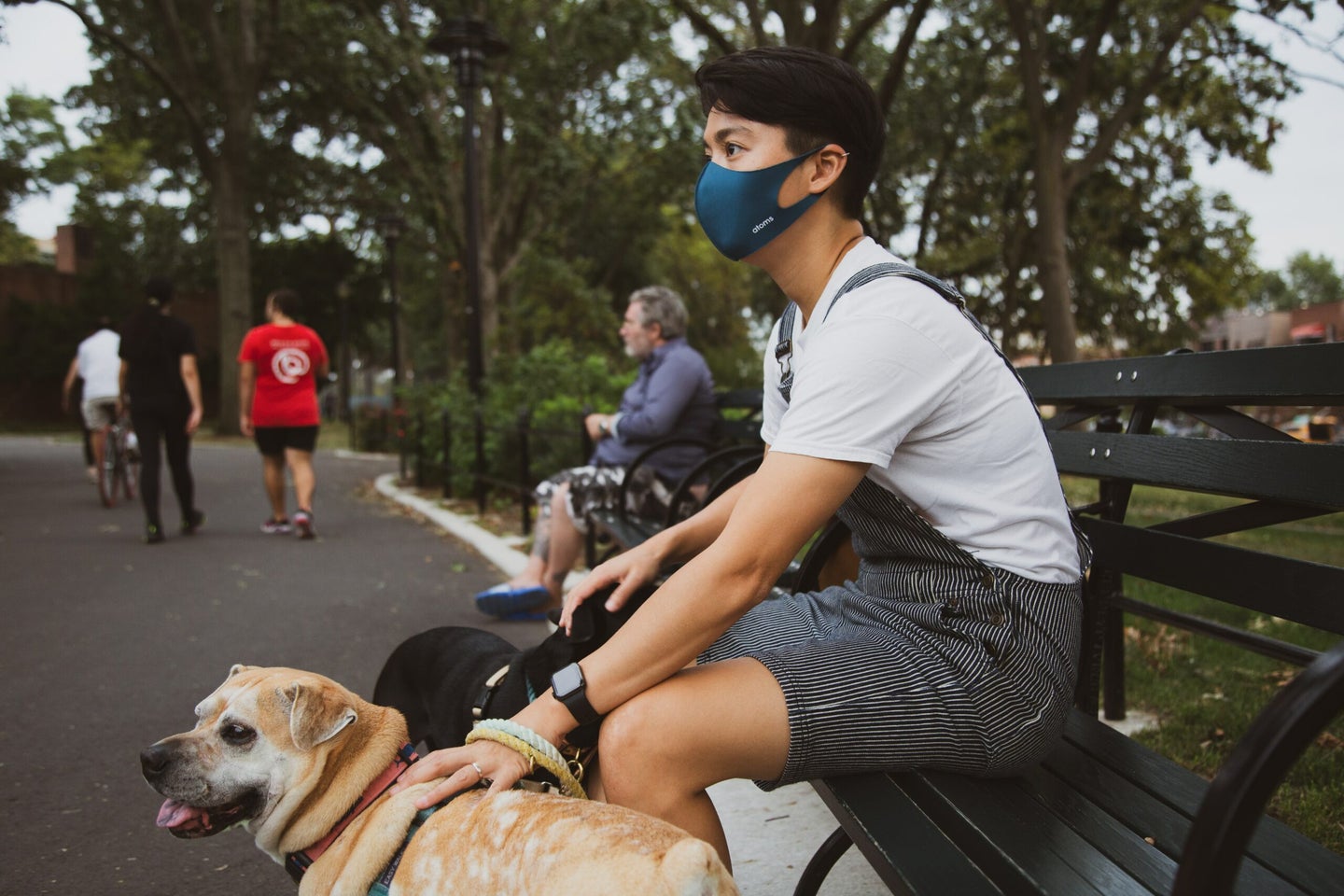 At this point, numerous studies indicate that masks prevent the wearer from spreading COVID-19 to other people. There’s also additional evidence that masks protect the person wearing them from catching the disease. Unsplash
SHARE

A study published this week by scientists in Denmark found that recommendations to wear masks didn’t prevent significant numbers of people from becoming infected with the novel coronavirus. The researchers recruited more than 6,000 volunteers this spring and randomly assigned them to two different groups. All the participants were encouraged to practice social distancing. Roughly half were additionally advised to wear masks when in public and were given a supply of 50 surgical masks.

About 4,860 people completed the trial, and participants in both groups caught COVID-19 at similar rates, the scientists reported on November 18 in Annals of Internal Medicine. However, the findings come with numerous limitations, experts say.

“I would not change any practice or recommendation about masking based on it,” Deepak L. Bhatt, the executive director of Interventional Cardiovascular Programs at Brigham and Women’s Hospital in Boston, told Popular Science in an email. “This study provides no actionable information about masking when used properly, with a high level of adherence with actually wearing the mask, and when high proportions of the population are masking up.”

At this point, numerous studies indicate that masks prevent the wearer from spreading COVID-19 to other people. There’s also additional evidence that masks protect the person wearing them from catching the disease. The Centers for Disease Control and Prevention recently updated its guidance on masks to recognize that masks likely provide some protection to both the wearer and those around them. This means that “individual benefit increases with increasing community mask use,” wrote the agency. In other words, the more people that wear masks, the better off everyone will be.

In a statement accompanying the new paper, Christine Laine, the editor in chief of Annals of Internal Medicine, said the new findings don’t conflict with the CDC’s guidance, but suggest that whatever contribution masks have to reducing risk to the wearer is likely to be small. In an editorial published alongside the paper, Laine and her coauthors emphasized that the results don’t imply that widespread mask-wearing is ineffective at controlling the pandemic (in fact, very few members of the general public in Denmark were wearing masks during the time of the study). Rather, Laine and her colleagues wrote, the findings suggest that “mask wearing by a minority of persons—even with high-quality surgical masks like the ones provided to trial participants—does not make the wearers invulnerable to infection.”

In a second editorial published along with the paper, Thomas Frieden and Shama Cash-Goldwasser of Resolve to Save Lives, an initiative of the nonprofit Vital Strategies, wrote that the unique characteristics of the setting where the study took place limit how conclusive and generalizable the findings are (Frieden is also a former director of the CDC). In April and May, COVID-19 was spreading less ferociously in Denmark than in other locations such as the United States and United Kingdom.

“Masks have been shown to protect others and, despite the reported results of this study, probably protect the wearer,” wrote Frieden and Cash-Goldwasser. “If everyone wears a mask when near others, everyone is safer.”

One month after the study began, the participants were tested for antibodies to the novel coronavirus. The researchers also examined how many people received a positive diagnostic test or were diagnosed with COVID-19 in a hospital. The study also only included adults who spent at least three hours out of the home daily and had occupations that did not require them to wear masks. In the group advised to wear masks, 42 people became infected (1.8 percent), while 53 people in the other group (2.1 percent) became infected. While these results show that infection rates were lower among those who wore a mask compared with those who didn’t, the difference between the two groups’ results wasn’t statistically significant.

The most important limitation of the study, the researchers wrote, is that “the findings are inconclusive.” The study was designed to investigate whether advising people to wear surgical masks (in addition to following other public health measures) would cut the rate of infection more than 50 percent. Despite not meeting this target, the team wrote, it’s possible that masks do offer a smaller degree of protection to the wearer.

Another limitation is that only about 46 percent of participants reported faithfully wearing the masks as recommended (an additional 47 percent wore the masks “predominantly as recommended,” and 7 percent “not as recommended”). It’s also possible that some people in the group that didn’t receive instructions to wear a mask did so anyway, says Raina MacIntyre, head of the Biosecurity Program at the University of New South Wales’s Kirby Institute in Kensington, Australia, who was not involved in the research. “The lack of proper measurement of compliance is the most serious problem,” MacIntyre said in an email. “Measuring compliance needs daily monitoring.” The kinds of surgical masks used in the new study aren’t designed to prevent respiratory infections and don’t not seal around the face, she added.

Ultimately, MacIntyre said, the study doesn’t provide data on how effective masks are—just on the effectiveness of a recommendation to mask up. The impact of mask recommendations on curbing COVID-19 transmission will depend on how widely the virus is already spreading in the community and how much people adhere to other key measures like social distancing. In a video accompanying the paper, Henning Bundgaard, the lead author and a cardiologist at the Copenhagen University Hospital, said, “It’s very important to underline that our findings suggest that people should not abandon other COVID-19 safety measures regardless of the use of masks.”

An intriguing difference between the two groups in the study, says Jerry Cangelosi, an infectious disease epidemiologist at the University of Washington in Seattle who was not involved in the research. The number of positive antibody tests was similar in both groups. However, fewer people in the masked group received a positive diagnostic test or hospital diagnosis of COVID-19. “Although I don’t think the numbers were big enough to be statistically significant it’s still striking,” he says. These findings would fit with the possibility that people who wear masks are more likely to experience asymptotic infections that cause them to produce antibodies without becoming sick.

“These results could potentially be consistent with, although it’s nothing close to proof, [the idea] that if you wear a mask you might still inhale some of the virus but it would be less than you would if you were not wearing a mask,” Cangelosi says. “Given the fact that really these masks are not really designed to protect the wearer, they’re designed to protect the community, actually these results turned out pretty good for masks.”

Bhatt would like to see further research on what kinds of masks are most useful in different situations, but emphasizes that we already have ample evidence that masks are crucial in thwarting the spread of diseases like COVID-19.

“It is not going to be 100% effective—few things in medicine or public health are—but that does not mean it does not have value,” he said. “Social distancing, wearing a mask when social distancing is not possible, and good personal hand hygiene have a large impact on COVID-19 (and other infections such as influenza, for that matter). These relatively inexpensive and easy interventions can still help reduce the number of deaths and hospitalizations that will otherwise occur worldwide.”