The untapped Arctic reserves of petroleum have been tapped. 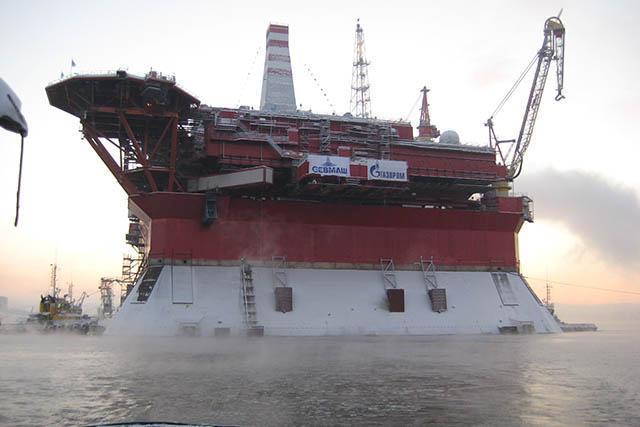 Russia has announced its first shipment of Arctic offshore oil. Russian President Vladimir Putin watched oil loading from the Prirazlomnoye drilling platform onto a tanker Friday via video link, according to state-run ITAR-TASS, and celebrated the shipment as the beginning of a bigger Russian presence on world energy markets.

The 70,000 metric ton load (roughly 490,000 gallons) is, as far as we know, the world’s first market-sized shipment of oil extracted from the floor of any marine body above the Arctic Circle. Offshore oil extraction has only become commercially viable in recent years, as advances in petroleum technologies have combined with warming temperatures to ease, slightly, the physical and financial challenges of drilling in the harsh Arctic environment.

Greenpeace and others have charged that the potential for an oil spill is too risky in the easily damaged Arctic environment, which includes important fisheries in the Barents Sea. They also argue that untapped supplies of fossil fuels should be left underground, in favor of developing energy sources that won’t create greenhouse gas pollution and further destabilize the climate.

The Prirazlomnoye field is located about 38 miles off Russia’s northwestern coast, in the Pechora Sea, the southeastern section of the Barents Sea. It holds an estimated 72 million metric tons of recoverable oil. The oil company Gazprom Neft operates the field, and has partnered with Shell on its overall Arctic offshore oil development.

The Prirazlomnoye platform was the site of an anti-drilling protest last September, which ended when masked Russian paratroopers boarded the Greenpeace vessel Arctic Sunrise and arrested all 30 crew and activists. The demonstrators were ultimately released without criminal prosecution thanks to a parliamentary amnesty. But Russia has not given up the ship, which remains in Murmansk.

President Putin’s apparent satisfaction about this offshore Arctic oil shipment seems particularly newsworthy set against his nation’s recent, retro-futuristic geopolitical relations with Ukraine, which feature the seizure of Ukraine’s Crimea peninsula in March, and subsequent threats to cut off natural gas shipments to Ukraine and the rest of Europe. (Russia is the major supplier of fossil fuels to Europe, according to the European Commission.) The former Soviet republic yesterday hosted a a renewable energy conference at its embassy in Washington, D.C. according to Bloomberg News.