In an effort to save farmers’ livelihoods, Pakistan and India have teamed up for a sophisticated surveillance system along the border. 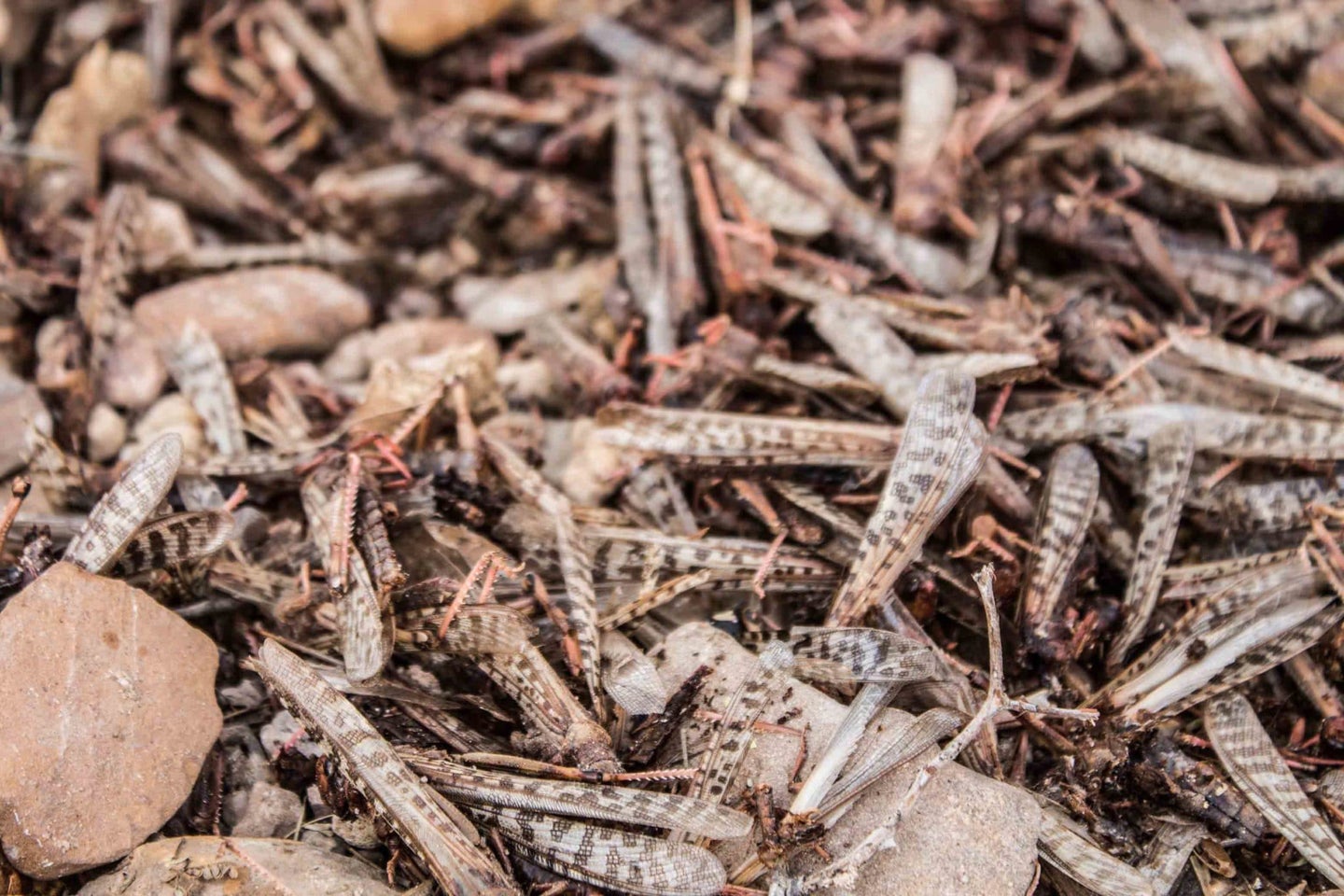 Lou Del Bello is a climate and energy journalist currently living in New Delhi. This story originally featured on Undark.

The farmer stands in front of his barren field, dotted with stunted cumin plants. Before the locust invasion this past January, the land was green with cumin, mustard, and chickpea plants. Twenty minutes were enough for the insects—a type of grasshopper—to destroy nearly all of it. Only the small bushes under a large tree were spared because locusts won’t eat in the shade, says Ummed Singh, who lives with his wife and four children in a small village in the arid state of Rajasthan, India, about an hour’s drive from Jaisalmer, the last outpost before the high security border with Pakistan.

Since December 2019, an international locust outbreak of exceptional severity spread across the Horn of Africa and the Middle East before moving on to Asia. Scientists say that climate change may have played a role in this incursion. In 2019, eight cyclones developed in the western part of the Indian ocean, bringing heavy rains to farmland, says Keith Cressman, senior locust forecasting officer with the United Nations Food and Agriculture Organization (FAO). When it comes to cyclones, he says, past years have brought just one, or even none, to the region. Locust breeding is directly tied to soil moisture and food availability, so rain patterns have a strong influence on locust populations.

Scientists and government officials agree that countries in the region—including India and Pakistan—must coordinate their efforts to minimize the damage of future swarms. A locust flare-up would be an equally serious threat on either side of the India-Pakistan border, says Muhammad Tariq Khan, technical director of the Department of Plant Protection, a branch of Pakistan’s National Food Security and Research agency. So far, the two nations have been able to set aside their political differences to address the locust problem, says Khan. But cross-border conflict anywhere in the wider region has the potential to disrupt economies and food security.

When conflict does break out, the FAO can serve as a neutral broker, says Cressman. He mentions that the 1979 revolution in Iran disrupted locust management cooperation between Iran and Pakistan. In the 1990s, both countries appealed to FAO to help them rekindle the dialogue. In addition to serving as an intermediary, the FAO collects data from all affected regions around the world, putting them online, so countries can plan monitoring actions or pesticide spraying.

For small farmers like Singh, the stakes are high. “This is the first time we’ve experienced this type of locust attack,” he says through a translator. As a child, he’d heard stories of devastating swarms, but until now, he had never witnessed one personally. “Sometimes I think I should commit suicide,” he says. The disaster “ruined everything. Not only me, but also my family are feeling that.”

Singh owns about 30 acres of land, and the locusts caused approximately $67,400 in damages. The government offered just a tiny percentage as compensation. Now that locusts have destroyed his crops, he will have to clear the land and plant again—a task that will require employing laborers and buying supplies. His entire family is bearing the brunt of this. Singh says his 14-year-old son has lost interest in studying and eating. Before the devastation he weighed 66 pounds, says Singh. Now the boy is down to just 48 pounds.

A mature desert locust can eat its own weight in food every day. While this may seem small—a locust only weighs two grams—a relatively small swarm can contain 40 million locusts. Such a swarm would consume as much food in one day as 35,000 people. And locusts can travel large distances in a short period of time, nearly 100 miles per day, says Cressman. This means that a swarm originating in Yemen could theoretically hit India in just two weeks.

On December 26, a small group of Rajasthan farmers stared at the horizon as a dark swarm landed on a rocky area to rest for the night. They knew that the next stop would be the cultivated land, and then the damages would be irreparable. Belvir Puniya, who heads a local farmers’ cooperative, says that an office assistant from the co-op happened to be in touch with that small group. He urged the other farmers to take action.

It was only a matter of hours before the swarm reached the fields. Representatives from every village met with Puniya to assess what was needed to stave off the threat in time. They had tractors, and they had spraying equipment and manpower. Puniya helped them procure pesticides. Over a thousand people eventually turned out to work around the clock for a week, spraying pesticides and making loud noises to confuse the locusts. A mass open kitchen was set up to feed all farmers who were helping out. While the damages were extraordinary, the grassroots intervention prevented the region from being devastated beyond repair, says Puniya.

Scientists, the United Nations, and local leaders all fear that this type of outbreak may become more frequent with climate change. In February, U.N. Secretary-General António Guterres cited the locust spread in the Horn of Africa: “Warmer seas mean more cyclones generating the perfect breeding ground for locusts. This is getting worse by the day.”

While Cressman believes it’s too soon to say whether invasions like this year’s will become the new normal, Khan is sure that “climate change was the real trigger” in this most recent outbreak. Heavy rains in Yemen and Saudi Arabia prompted the spread of locusts into Pakistan in March 2019, he explains, and there is “ample chance” that this will happen again soon.

Last year, the strained relations between India and Pakistan reached a tipping point after a suicide attack attributed to a Pakistani terrorist group killed 40 people in the Pulwama district of India’s Jammu and Kashmir state. The incident led India to carry out its first airstrike in recent memory on Pakistani territory, escalating into one of the most dangerous standoffs between the two countries in decades.

During that period, and into the summer, communications, trade, and activities slowed down or were suspended. But even as tensions grew at the border, at least one conversation was allowed to continue, negotiated under the FAO umbrella. Pakistani and Indian officials were gathering peacefully further south along the border in a place known as Zero Point , to stave off the threat of the desert locust.

Locust management in the region predates the India-Pakistan conflict. A predecessor of today’s Locust Warning Organization, a division of the Indian Ministry for Agriculture and Farmers’ Welfare, was established before the partition in 1939 in Karachi, now the capital of Pakistan, after a particularly brutal locust invasion from 1926 to 1931. And despite the decades of conflict that followed, when it comes to systemic issues such as food security, the partnership between the two countries is well honed, says Khan.

Six times a year, during the summer and fall, delegates from both sides of the border meet to discuss pest breeding patterns and control strategies, monitoring reports and local forecasts.

Three of the meetings are held in India and three in Pakistan, and while they take place in a high-security environment, with military forces attending the meeting along with locust specialists from the two countries, the atmosphere is always friendly, according to the participants. The officials’ only focus is food security and the betterment of the region, says Rajesh Malik, plant protection adviser with the Indian Ministry for Agriculture and Farmers’ Welfare. He says they meet regularly regardless of the political situation.

Over the years, the two countries have developed sophisticated surveillance capacity, consisting of trained personnel as well as vehicles and specialized equipment, which Khan says is key to contain the locust spread. Through its portal Locust Watch, the FAO helps countries coordinate locust response on the ground, a process that has become increasingly high tech in recent years. To ensure it collects timely and detailed information, it distributes satellite antennas that connect the monitoring teams to the internet. Officials on the ground are also equipped with a tablet to log information on the presence of locusts and their development stage, as well as data such as soil moisture and vegetation.

Through the satellite connection the tablet transmits the exact coordinates of each report, which are then relayed back to the public in the FAO monthly bulletins. Countries use this information to target breeding sites for pesticide spraying. In extreme cases, low flying aircrafts can target vast swarms with precision.

But the response chain is only as strong as its weakest link, and if any one part of the response breaks down then the whole system can fall apart. “In Yemen there was a war-like situation,” says Khan referring to the desert country’s ongoing civil war. That conflict has created a humanitarian crisis, with thousands dead and millions on the verge of starvation. In the midst of the crisis, the nation’s locust control activity has been neglected—even as locusts continued to breed and migrate towards Asia last year. Khan says the environment in Yemen remains favorable to locusts, and breeding could escalate again.

Last December, says Khan, countries of the United Nations’ Desert Locust Control Committee came together in Ethiopia and discussed the lack of response capacity in Yemen and the Horn of Africa. “First and foremost, these countries need surveillance,” he says. “They need technical manpower followed by robust control operations and immediate response.”

As the consequences of conflict and lack of governance reverberate to distant corners of the planet, Ashok Swain, an associate senior fellow at the Stockholm International Peace Research Institute in Sweden and a professor of peace and conflict research at Uppsala University, says that super-national threats posed by climate change cannot be ignored for much longer. Countries “cannot keep handling these issues unilaterally anymore,” says Swain.

“Whether we like it or not,” he says, “we have to cooperate.”