The "Do Not Call" list sucks. Winners of a Federal Trade Commission contest propose some high-tech strategies to finally stop automated sales calls. 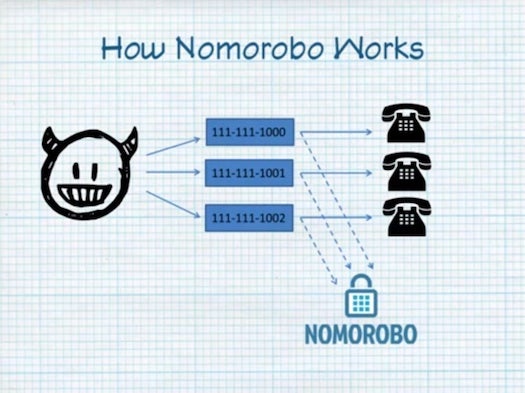 They slip through the U.S. Federal Trade Commission’s “Do Not Call” registry, and indeed through federal law. They fool you with that pause after “Hello,” so that they sound, for a moment, like there’s a real person on the other end of the line. They mostly sell fraudulent goods and services, according to the Federal Trade Commission.

The Federal Trade Commission gets 200,000 complaints about robo-calls a month, Harwood said. “More than we get on any other subject. Consumers are clearly fed up,” he said.

The contest’s winning ideas got some money—$25,000 each for winners Serdar Danis and Aaron Foss—and some publicity. After that, it’s up to the inventors and companies to contact each other to try to bring these ideas to market, Harwood said.

Check out the solutions below:

Nomorobo
Aaron Foss came up with the Nomorobo system, which intercepts incoming calls before they reach people’s phones. Nomorobo then determines whether the caller is an illegal robot before deciding whether the let the call through. The system compares incomings numbers with whitelists and blacklists the Federal Trade Commission maintains. The determination even works when a blacklisted robocaller uses caller ID spoofing to make it appear as if the call is coming from a non-blacklisted number, according to a video Foss made for the contest.

Numbers that aren’t on a blacklist, but seem to have robocall-like behaviors, go through an audio CAPTCHA. Nomorobo wouldn’t require people to buy any new hardware and works for cellphones as well as landlines.

Crowd-sourced blocking
Google employees Daniel Klein and Dean Jackson submitted an idea that won the Federal Trade Commission’s technology achievement prize, but wasn’t eligible for a monetary reward because it came from a company. In the Google solution, people who get robocalled can report the number to a database that then learns that number is fraudulent and blocks it in the future.

Playing dead
For those who don’t want to wait for contest ideas to turn into real services, the Federal Trade Commission’s contest also drew a lot of entries from people who didn’t exactly have a technological solution, but wanted to share what they do now to reduce the number of calls they get. Some people played to robocallers that three-tone “doo-doo-doo” sound that indicates a disconnected phone numbers, fooling the callers into never calling again. The commission collected the tips in a video.