NeuroSpire, with Jake Stauch at the helm, has developed software that lets companies scan brains to deliver better ads--and do it on the cheap. 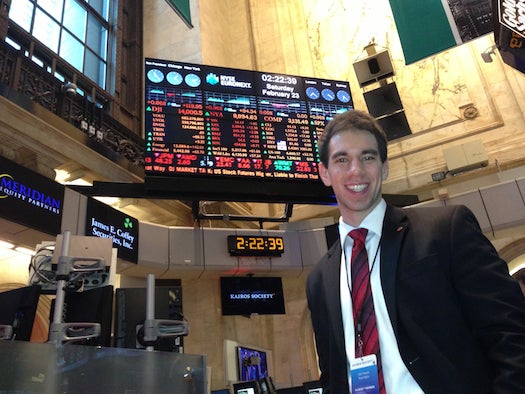 About four years ago, Jake Stauch was in a neuroscience class at Duke, learning about an intriguing experiment. In it, subjects went through an fMRI while being shown photos of Godiva chocolates. A price accompanied the chocolates, and the subjects had to answer yes or no, would they buy this? Some of their neurons lit up like wildfire. Chances are, if Stauch was strapped into a machine, his brain would’ve flickered at the idea, too.

Stauch, a confirmed whiz who in high school got a perfect 2400 on his SAT while fighting bronchitis, was inspired. It was an innovative technique, reaching inside buyers’ skulls to see what they thought before products even hit the shelves. So he started combing through something like 150 peer-reviewed neuroscience articles. A year later, he founded NeuroSpire, a Durham, North Carolina-based business that gives marketing companies everything they need to conduct their own brain scan-based marketing tests. “Somebody with no training whatsoever could be set up in minutes to run a brain imaging research study,” he says. The guesswork of advertising is turned into numbers that purport to help companies get a window into consumers’ heads: to see if They’ll buy it, or They won’t. That might help explain why ad agencies such as McKinney–which counts Samsung and Sherwin-Williams among its clients–have signed up for NeuroSpire, despite that the scientific merits of such services remain murky.

Neuromarketing is the science of determining what customers like not by asking them–ads work subconsciously, so what do consumers know about what they want?–but by hooking them up to a brain scanner and seeing exactly what the lizard-y parts of our brain are hungry for.

That field has exploded in recent years, growing even since Stauch, who dropped out of Duke in 2012 to focus on his business, founded NeuroSpire. Big corporations, after all, are interested in knowing if neuromarketing works and, if it does, how to take advantage of it. Google, Disney, and plenty of others have used neuromarketing, and the idea is still in its infancy. (One heavily cited study from 2007: “What is ‘neuromarketing’? A discussion and agenda for future research.”)

But there are some problems: For one thing, academics and scientists still debate the merits of the science. In 2004, a Nature Neuroscience editorial called neuroscience-based marketing “a highly speculative investment” for companies. It went on:

If companies pour out large sums based on unrefereed claims that have not been published or subjected to the scrutiny of the scientific community, they will have only themselves to blame if the investment does not pay off.

One of the biggest problems is: how do you know that what you’re measuring in a lab has any equivalent in the real world? Yes, a screen lit up when those subjects looked at pictures of Godiva chocolate, but that doesn’t necessarily mean they’ll go out in the world and buy Godiva chocolate.

Still plenty of companies are willing to suspend disbelief for what they see as a useful, quantitative approach to market testing. But then they often smack into another big problem: neuromarketing is almost prohibitively expensive to conduct unless you’re a huge corporation with cash to burn. Your options are as follows: a.) buy equipment, potentially for thousands of dollars, and staff a technician who can run trials, or b.) hire a company to come in, set up the machinery, and conduct the research for thousands of dollars. If you’re running a multi-million-dollar ad campaign that hinges on the thoughts of a few key demographics, maybe that’s worth the expense. For most, especially with the science still in its early stages, it probably isn’t.

That’s where Stauch, 22, comes in. His startup turns neuromarketing into a DIY affair. How it works: A company or marketing firm buys an Emotiv EEG Neuroheadset—a popular open-source brain-scanning headset–that NeuroSpire pre-programs with a custom EEG test. (Stauch developed the test with a business partner in the Netherlands, Jeroen Kools.) Marketers stick the headset on a test subject and ask his opinion on the ad or packaging design in question. Lights on the headset flash when a good brain signal is being picked up.

During the test, the marketers can open a NeuroSpire application on just about any computer to see that the brain waves are in fact being picked up. But that’s where their involvement ends. The raw data gets beamed back to Stauch and the NeuroSpire team for translation. Before getting crunched, the numbers look like a faulty GPS puked longitudes and latitudes onto an Excel document. NeuroSpire gives options after that: a company or agency can pay for anything from a “score” that shows how well the ad or design did to a full-blown 30-page report that includes second-by-second reactions.

Whichever option the marketers choose, they end up paying less than they would if they took a more traditional route. A single fMRI study might cost a company between $100,000 and $200,000. An EEG study might cost between $40,000 and $60,000. Because NeuroSpire eliminates the complicated equipment and staff required of standard neuromarketing tests, it can do an EEG test for about $5,000.

Getting the company off the ground wasn’t easy. After a brief spell conducting traditional neuromarketing tests, NeuroSpire relaunched in the form in which it exists today. Stauch and his colleagues entered a start-up seed-funding contest called Start-Up Madness, which pits companies founded by graduates of ACC conference teams against each other. NeuroSpire won the contest, and got $5,000 in starter money.

After that, Stauch started cold-calling companies to give them the pitch. NeuroSpire didn’t have a PR or official business arm, but before long, companies he hadn’t already called started reaching out to him, about once a month at first, then more often. 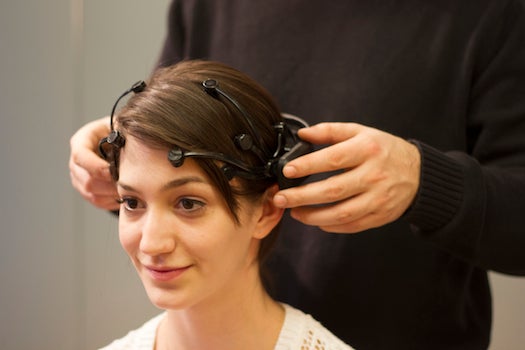 An Assistant From A Recent Study Putting On The Emotiv Headset

The Durham, North Carolina-based ad agency McKinney has tried out NeuroSpire’s service while working on campaigns for “a couple” of brands in different categories. Chris Walsh, vice president and director of consumer and business insight at McKinney, heard about NeuroSpire through a colleague, another Duke student, and started working with Stauch. Walsh and the McKinney team tested a campaign—they wouldn’t say for which company–first through the headset, then a traditional survey, and later through an online survey. What they’ve found, in limited use, is that the results from NeuroSpire have matched up with results from the more traditional techniques. Either an ad is leaving an impression–“driving emotional responses,” Walsh says–or it’s not. And if it’s not, McKinney has corrected course based on that information. 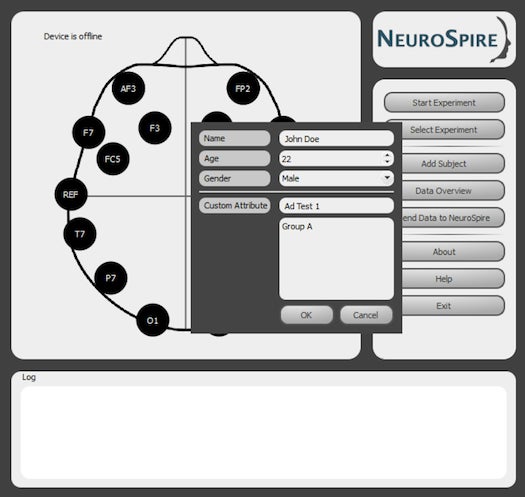 That still doesn’t tell us if consumers then went out and bought whatever was being advertised. But such are the risks of marketing research. Surveys and focus groups alone have their own limitations. If the barrier to entry is low enough in neuromarketing, and the corporation looking for data is big enough, then it could be worthwhile for the corporation to take the chance anyway. That’s what NeuroSpire represents: a chance for companies–even some smaller ones–to get in on the science of neuromarketing, shaky though it may be.

I asked Stauch, in a sort of acrobatic, confirm-or-deny FBI way, if I might see the brands NeuroSpire works with when I walk down the street. In other words, if we, the public, know them. He told me, “Yes. Definitely.”

The brands are doing their best to get to know us, too.