In the middle of a nationwide lockdown, India is preparing for a super cyclone

The nation has already been planning for how they would adapt their disaster response. 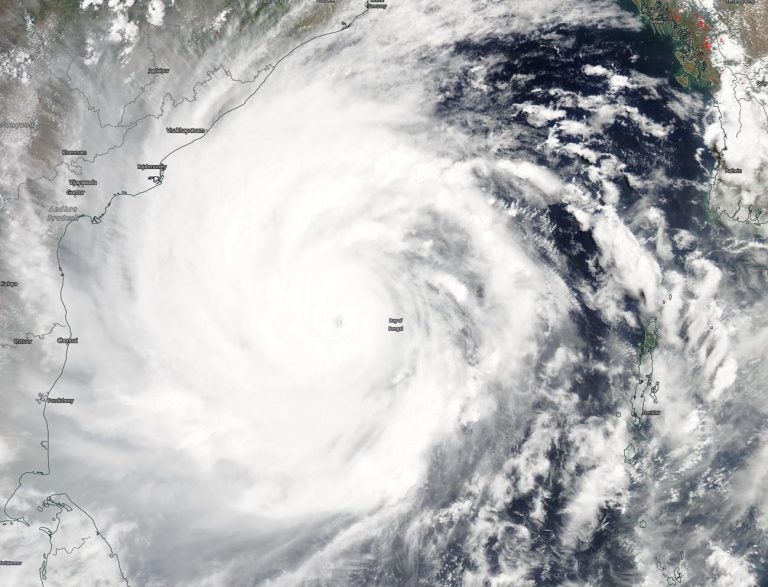 India has been planning for an extreme weather season in the context of COVID-19 for some time. NASA Worldview
SHARE

On the Bay of Bengal this week, an environmental disaster has a name: Amphan. The storm, which was recently reclassified from a super cyclone to a slightly less severe, super cyclonic storm, is among the strongest storms ever to be recorded in the Bay. It could potentially impact almost 40 million people in India and Bangladesh, according to the Pacific Disaster Center, which tracks natural disasters in the area. In the midst of mitigating the potential downfalls of this storm, officials are working to prevent another disaster: the enhanced spread of COVID-19 as people evacuate and first responders work closely together.

Odisha, the east Indian state likely to be hardest hit by Amphan (pronounced UM-PUN), has plenty of experience dealing with environmental disasters. Mongabay India reports that experience prepared them to handle the medical disaster caused by this pandemic. But now, they face a battle on two fronts: getting people out of Amphan’s way and keeping them uninfected as they do so.

India has been planning for an extreme weather season in the context of COVID-19 for some time, says Loretta Hieber Girardet, the United Nations Office for Disaster Risk Reduction’s chief for the Asia-Pacific region. In a meeting with UNDRR a few weeks ago, Giradet says the nation was already planning for how they would adapt their disaster response. “They’ve been pre-positioning supplies,” she says, “and they’ve been adapting early warning messaging so that it would include information on physical distancing and preventive behavior.”

Odisha’s state disaster management authority is also prioritizing COVID-19 distancing practices in how shelters are being deployed for evacuees. According to a government document published yesterday, pregnant women and elderly people are being separated so that they can be given specialized accommodations, and everyone who must evacuate for safety reasons are being encouraged to wear masks or otherwise cover their mouth and nose. SMS messages and the use of warning sirens are also being used to warn people they need to evacuate, The Times of India reports.

The storm is expected to make landfall on May 20, the Times reports, and hit both Odisha and the adjacent state of West Bengal, where Kolkata is located. Both states border the Bay of Bengal, the “world hotbed of tropical cyclones” according to the BBC.

The UNDRR is watching what happens with Amphan, as it did with Tropical Cyclone Harold in Vanautu last month, for potential takeaways on how to accomplish environmental disaster management and medical disaster management at the same time. India has been under one of the world’s strictest COVID-19 lockdowns, which is now in its 56th day.

“India does have a very strong national disaster management agency,” Girardet says. “For that reason, I think that there will be some good lessons that we’ll be able to share with other parts of the region.”

The big question, she says, is how well both India and neighboring Bangladesh, which will also be affected by Amphan, are able to coordinate their distinct health and disaster management agencies to effectively prevent the spread of COVID-19 during evacuations and disaster response. “That’s something I think we’ll be watching carefully,” she says.