About the size of a milk carton, the Foresail-1 satellite will seek new details about in Earth's radiation field. 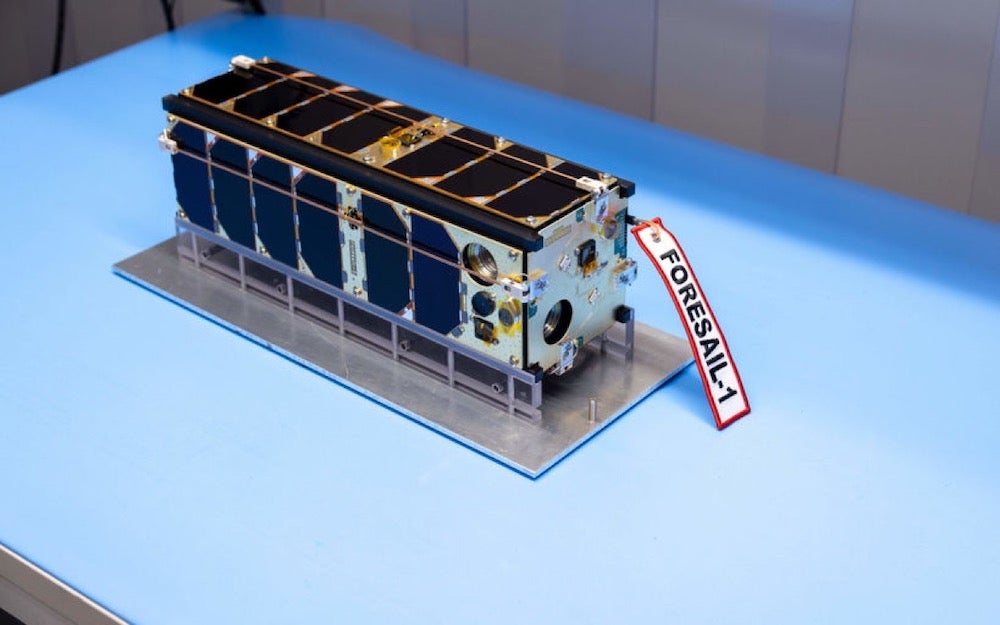 Foresail-1, the first satellite from the Finnish Centre of Excellence in Research of Sustainable Space, is ready for launch. Mikko Raskinen/Aalto University
SHARE

2022 has been a busy time for space launches—with the first all-private space mission taking off last week and NASA and SpaceX’s Crew-4 launch to the International Space Station rescheduled for later this month. Of a more international note, there’s a new player emerging in the space industry. Launching this year on a SpaceX Falcon 9 Rocket from Cape Canaveral, Florida, Finland will soon send its first science satellite, Foresail-1, into space.

Finland has developed radar satellites in the past, but Foresail-1 will be the first to collect data for science. Developed by the Finnish Centre of Excellence in Research of Sustainable Space, the nanosatellite, which weighs about nine pounds and resembles a metal milk carton, will seek new details about the radiation environment in Earth’s atmosphere. This unique area padding the planet is where different space radiation fields coexist. Exposure to these rays have been known to put astronauts at risk for radiation sickness, increased risk of cancer, and degenerative diseases.

Satellites in this radiation belt are also bombarded with so much radiation energy that they end up suffering adverse effects that can cut a mission short. Radiation storms can destroy critical components, cause charging problems, and lead to total satellite loss. If Foresail-1 can withstand the harsh conditions, the mission could lead to a better understanding of the environment, and help build future cheaper satellites that can last longer operational lifetimes.

The next generation of space exploration is all about sustainability, says Jaan Praks, an assistant professor of electrical engineering at Aalto University whose team helped plan the mission and built Foresail-1. That’s why Finland is starting their foray into space on a smaller scale.

“We are pushing the borders with platform technology,” he says. “We are looking [to] operate the satellite for at least five years and even beyond, which is unusual for such a small satellite.”

Because the pandemic made it difficult to acquire the components they needed to build the technology, Praks says Foresail-1 took about four years to be completed, and its original launch date had to be pushed back by a year. But the extra time gave the team room to further develop and integrate tools that will improve the odds of mission success.

[Related: Ukraine was about to revive its space program. Then Russia invaded.]

Foresail-1’s primary payload is a particle telescope, which will be used to measure electrons exiting the radiation atmosphere in Low Earth Orbit (LEO). Its second, and arguably more impressive equipment, will be an electrostatic plasma brake, a device which will prevent the craft from becoming space debris by pushing it down out of orbit to burn up in the atmosphere. It usually takes years for space debris to fall into Earth’s atmosphere, but using a plasma brake can flip that time into two months.

One of Foresail-1’s technological goals is to demonstrate the usefulness of this plasma brake. The way the plasma brake works is it “increases the drag by using electromagnetic fields,” explains Praks, which by slowing it down, brings the satellite’s orbit close enough to Earth that it falls and eventually burns in the atmosphere.

After a few months of scientific observation, researchers will use the brake and about 200 feet of tether, to lower the satellite a few dozen miles further down into LEO, where it will stay for the rest of its mission life.

The new advancements in technology has shrunk the average size of satellites, says Rami Vainio, a professor of space physics at the University of Turku in Finland, who led the development of the particle telescope. “Very often these satellites do not have rocket engines or powerful enough thrusters that could bring them down in a controlled manner.”

He says that this new de-orbiting technique will allow Finnish researchers to “probe more versatile regions of earth’s environment.” If successful, it will be the first time a propellant-less nanosatellite will demonstrate this maneuver. The satellite’s plans will also be available as an open-source project that can be used in future missions.

While the satellite is Finland’s first to make scientific observations, the country does have an extensive history of space collaboration. The small nation has been a member of the European Space Agency since 1995, but has only recently become an important partner in many large-scale, international space operations. For instance, Finland is one of the largest providers of commercial radar imaging satellites in the world, and at times, NASA has used Finnish technology to provide Mars missions, like Perseverance, with pressure sensors to help take atmospheric measurements on the Red Planet.

The revolution of tiny cube-shaped satellites, or CubeSats, that began a few years ago spurred Finnish researchers to branch out into developing their own scientific space missions. To many of its citizens, Foresail-1 is a beacon of the country’s bright entry and future growth into the space industry. The current satellite’s successor is already in the works. “The next mission, Foresail-2, is planned to be two times bigger and going to a very difficult area where no CubeSat has been flown before inside the radiation belts,” Praks says.

Currently, Finland lacks its own space agency—the Finnish Space Committee only handles national space policy and strategy, not mission creation or development. The new satellite mission marks the first step towards building a more robust agency that can support a number of ambitious projects, says Praks.

“I hope we are driving towards our own Finnish space program,” says Praks. “Having our own small program will provide even more material for future missions with the bigger satellites [to reach further out] in the solar system.”

Correction (April 18, 2022): This story has been updated to correct the amount of tether that will be used in the braking mechanism, from 60 feet to 200 feet. We regret the error.