It depends on how they're deployed. 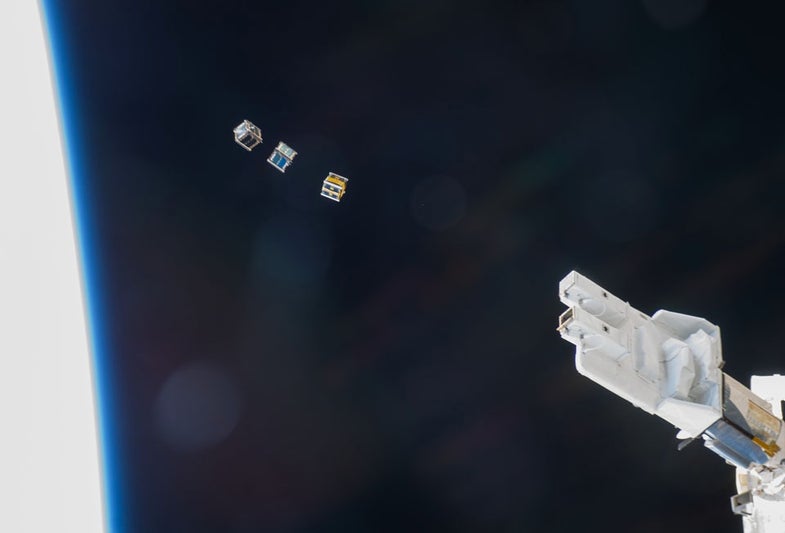 Over the past 15 years, we’ve been sprinkling space with eensy satellites. Universities, startups and national space programs have all launched fit-in-your-hand satellites that, variously, study life in space, flash Morse code and snap smartphone photos. This Sunday, a Cornell University-based team hopes to launch 104 poker chip-sized circuit boards that will orbit Earth on their own:

Small satellites are cheap to build and deploy, so they save space programs money. They’re also affordable and simple enough for students to build, so they’re great educational tools. But their popularity made Popular Science wonder… The Earth is already surrounded by space junk. Isn’t launching 100-plus nanosatellites a bit like throwing crumbs on the living room floor?

Luckily, many satellites are able to do something crumbs aren’t. They clean themselves up. Small satellites launched into orbit 650 kilometers or less above the surface of the Earth soon fall back down toward Earth. They plunge through the Earth’s atmosphere and, because they’re small, they burn up before reaching the ground. In addition, few spacecraft orbit below 650 kilometers in altitude, so there’s not as much for small satellites to hit.

Cornell’s “Sprite” circuit boards will hardly be a blip in space. “Those will only be in orbit for a few days,” Nicholas Johnson, chief scientist at NASA’s Orbital Debris Program Office, tells Popular Science. “We’ve reviewed this mission very carefully and there’s no problem at all for the other resident space objects out there.”

Problems arise when people send smaller satellites into higher orbit. At higher altitudes, satellites encounter exponentially less atmospheric drag, which is the main force that pushes satellites to lower altitudes and eventually back to Earth. Unlike their bigger cousins, small sats don’t have the technology to drive back down, either. Researchers may develop this tech in the future. For now, however, once small satellites get way up there, they’re stuck. At that point, they’re dangerous.

“These are the most dense regions of space,” Kessler says. “They will eventually collide with something.”

“These are the most dense regions of space. Orbital lifetimes are hundreds of years. They will eventually collide with something,” says Donald Kessler, a retired NASA scientist who founded the agency’s orbital debris program.

The majority of organizations keep their small sats below 650 kilometers, in compliance with international guidelines developed to reduce space debris. Some haven’t followed the rules, however. Johnson sent me a short list of one- to three-kilogram satellites that have gone above 650 kilometers—none, he noted, on American launch vehicles. “We’d like to see those exceptions be reduced to a very few,” he says. “It’s a matter of education, both of the small satellite owners and the launch vehicle operators.”

In addition to Johnson and Kessler, Popular Science_ thanks Heiner Klinkrad of the European Space Agency’s Space Debris Office for his guidance in answering this question._