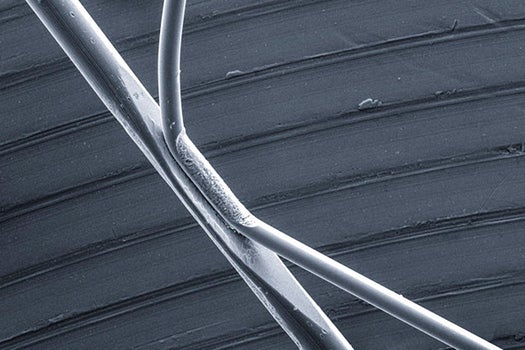 Electric solar sails use long metal tethers that conduct electricity and interact with solar wind ions and propel a spacecraft. Invented in 2006, the technology could allow us to sail through space cheaper and faster than ever before: One day, the European Union’s ESAIL project could take us to Pluto in as little as five years.

But the technology is still working out some kinks. About half of all orbital tether tests have either failed to deploy or snapped under the impact of micrometeoroids, according to the European Space Agency. But now the agency is saying they’ve made an unsnappable tether for a solar sail, just in time for the April launch of ESTCube-1, Estonia’s first satellite.

At only about half the width of a human hair, the tether is made of several aluminum wires interwoven so that even if one is cut, an electric charge can still run through it to create thrust. Within Earth’s magnetic field, the system could be used as a braking system to take spacecraft out of low orbit.

A 10-meter long version will be tested as a deorbiting method on ESTCube-1, a student-built satellite project from the University of Tartu. A longer, 100-meter tether will be used on CubeSat Aalto-1, a Finnish student satellite scheduled to launch later next year, according to the ESA.