Meet Joe Engle, A Pilot Who Flew A Rocket Plane Into Space 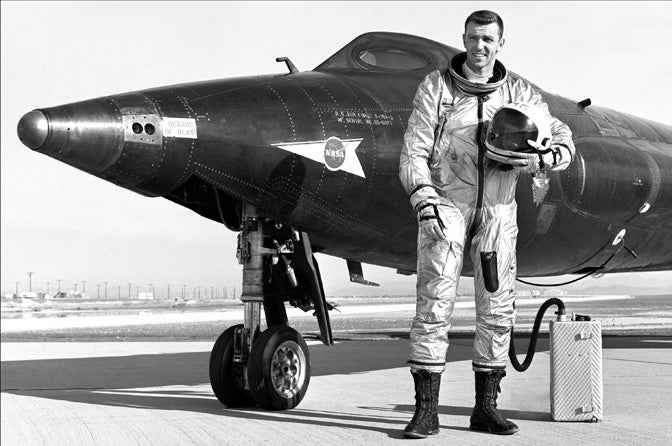 On June 29, 1965, U.S. Air Force pilot Joe Engle qualified as an astronaut, though he wouldn’t join NASA’s astronaut corps for another nine months. That Tuesday morning, Engle flew the X-15 rocket plane to a peak altitude of 280,600 feet or 53.1 miles, 3.1 miles beyond the threshold of where air ends and space begins. Last weekend he was inducted into the International Air & Space Hall of Fame at the San Diego Air & Space Museum, and I got to sit down and chat with him about flying that tiny, awesome rocket plane. 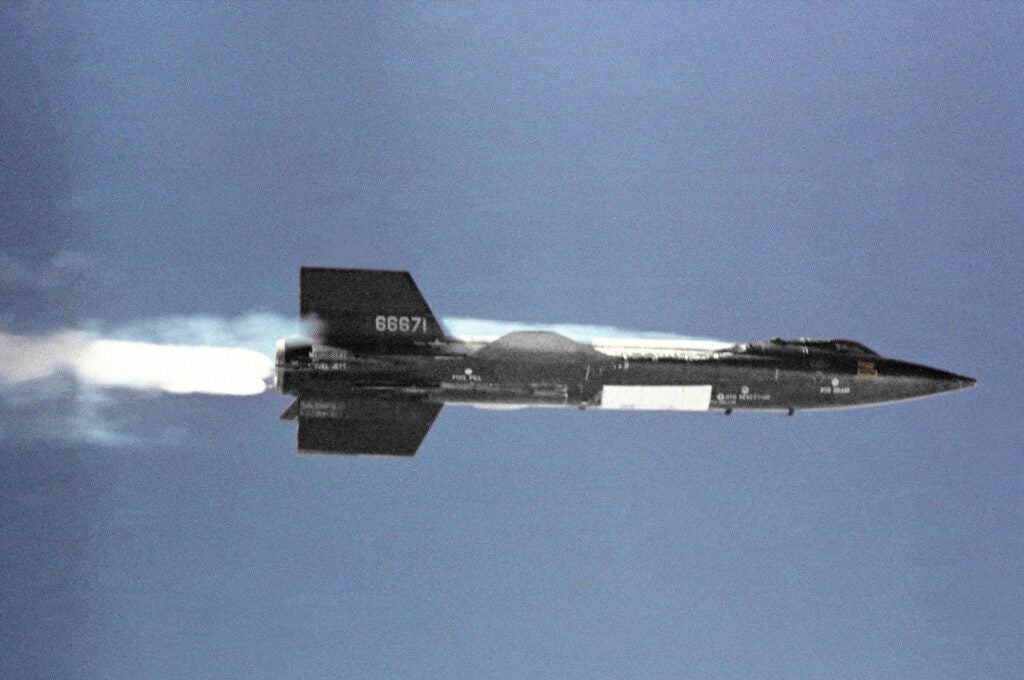 Conceived in the early 1950s when airplanes were barely breaking Mach 2 or twice the speed of sound, the X-15 was a research aircraft designed to gather data on instability at speed up to Mach 7 and altitudes up to 50 miles. The first production aircraft rolled out of North American Aviation’s hangar in Los Angeles on October 15, 1958, and it looked every bit at space-aged as its high speed and high altitude flight profile suggested.

The X-15 really looks more like a missile than an aircraft. And really, it is sort of a missile with room for a pilot. It was even air launched from under the wing of a B-52 bomber like a missile. Fifty feet long, 13 feet high, and a wingspan measuring just 22 feet across, the bulk of the X-15’s fuselage was dedicated to anhydrous ammonia and liquid oxygen tanks and the plumbing needed to force both liquids into the powerful rear mounted XLR-99 rocket engine (though earlier flights used smaller, ethyl alcohol fueled XLR-11 engines).

Only the slight bump behind the nose with a narrow window indicated that a pilot was meant to sit inside.

But there’s one other piece of the X-15 that makes it a fascinating vehicle. Because it was designed to fly where the atmosphere is too thin for traditional flight controls — ailerons, elevators, and rudders — to bite into, the X-15 also had reaction controls. After burning his rocket engine on a steep climb to reach peak altitudes, small hydrogen peroxide jets gave the pilot a way to control his orientation in the nearly atmosphere-less environment. 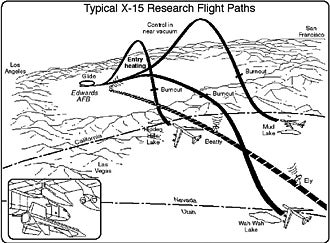 Learning to fly the X-15 was an incremental process, Engle said. The parts of the flight that used traditional flight controls called for classic piloting skill, using reaction controls in the upper atmosphere took some getting used to, and learning to fly a flight profile that combined traditional controls with reaction controls was a challenge. On one short flight, he had to use both control systems seamlessly. Simulators helped by replicating the flight down to jets that produced equivalent thrust in a hangar at Edwards Air Force Base as the X-15’s would 50 miles above the Earth. And the simulators were constantly updated with the latest flight data meaning it was an increasingly realistic representation of what the real thing would feel like.

And the flights were incremental, too. Engle’s first flight, like every X-15 pilot’s first flight, was a checkout flight. He only went Mach 4 and reached a peak altitude of just 77,800 feet. Rather than records, the goal for this flight was for Engle to familiarize himself with the little aircraft and make the all-important unpowered landing on the dry lakebed at Edwards Air Force Base.

Engle went up in an X-15 nestled under the wing of a B-52 thirty-two times but only launched from the mothership 16 times. And not once was he rattled. Most of the aborted take offs were for innocuous things like communications or instrument problems.

And finding himself arcing over a flight path more than 250,000 feet in the air didn’t rattle Engle’s nerves either.

Altitude flights treated X-15 pilots to a view of the curvature of the Earth and a brief period of weightlessness before gravity pulled the airplane back down to begin the high-speed descent. And while the view might have been breathtaking, Engle said it was more than anything an important flight instrument. The X-15 didn’t have an inertial guidance system. It used mechanical gyros that tended to drift with acceleration, so being able to look out the window and visually orient himself was more data and less scenery. There was too much to do on these short flights to really stop and take it all in.

But the view did, however briefly, highlight the reality of the task at hand. As Engle described it, to fly the X-15 meant bringing your A-game to work. Alone on top of the world, his life was quite literally in his own hands; no one but he could pilot that airplane seamlessly from atmosphere-less space to the lakebed. In that moment, he said, you had to be convinced that you’ve got the best hands in the world.

Taking In the View 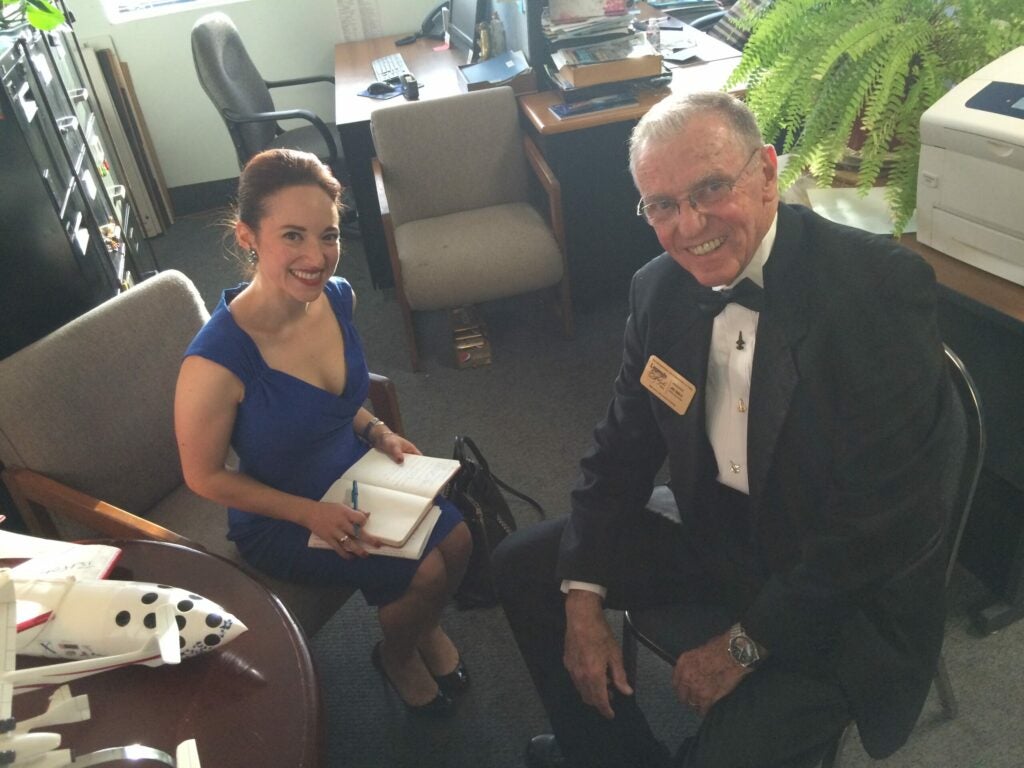 Me and Joe Engle.

Engle left the Air Force and joined NASA in March of 1966 as one of the Group 5 astronauts, and he was the first man to join the space program with astronaut wings. He trained to fly on Apollo 17 but was bumped from the crew when the last three lunar missions were cancelled. Suddenly, Apollo 17 was the last chance for a scientist to walk on the Moon and geologist Jack Schmitt was added to the crew. But Engle did make it into space. After returning to Edwards to fly approach and landing tests with the space shuttle Enterprise, he served as the commander of STS-2. On that flight, he told me, he finally had a chance to stop and take in the view of the Earth curving below him, a far better view than the brief glimpse at the top of an X-15 flight. On that mission, he manually flew the shuttle from Mach 25 to landing. From about Mach 6 on, he said, the shuttle handled more or less the same as the X-15, only it felt a lot bigger.

The X-15, Engle told me, was an exciting airplane to fly, akin to riding a high spirited thoroughbred horse. And it remains his favorite and most professionally rewarding of the 185 different types of planes he’s flown over the course of his career. And, I should point out, he couldn’t be nicer to sit down and talk to.

Sources: My conversation with Joe Engle; NASA; NASA; “At the Edge of Space” by Milt Thompson.