Create your own commands for Amazon Echo and Google Home

Be the boss of your smart hub. 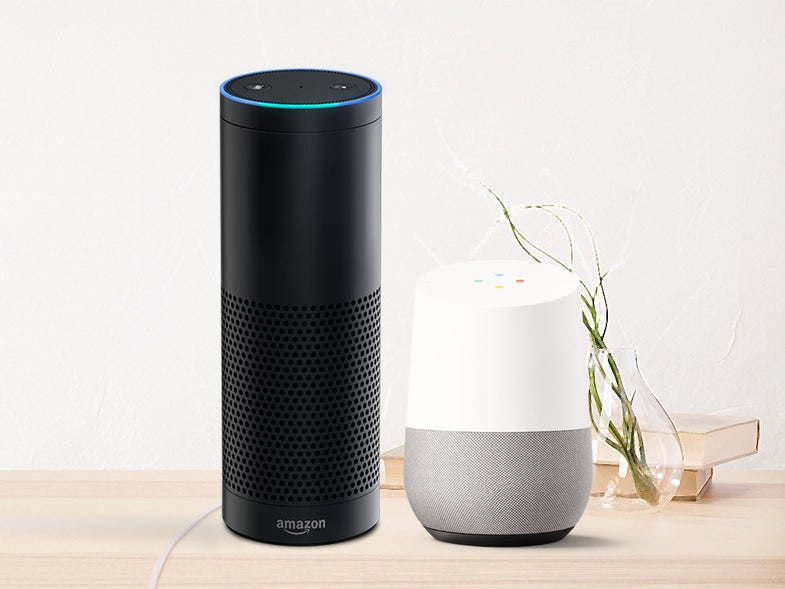 The Amazon Echo and the Google Home are among the elite when it comes to smart hub speakers. The list of supported commands for the Amazon and Google speakers is growing all the time, but if you find something’s missing, you’ve got another option—create your own.

The easiest way to create a custom Amazon Echo or Google Home command is to make use of IFTTT (If This Then That), a free service that connects together all kinds of other services and apps—you can use it to copy your Facebook status updates to Twitter, or to get weather reports texted to your phone, or to log your fitness tracking statistics to Google Drive, and so on.

You can also use it to create custom commands for Alexa on your Amazon Echo or Google Assistant on your Google Home. Once you’ve created a free IFTTT account, click your avatar in the top right-hand corner, choose New Applet, and you’re up and running.

The web app guides you step-by-step through the process of creating your own Alexa commands. Select Amazon Alexa or Google Assistant as the “this” part of the applet, then pick the option labelled “Say a specific phrase” (Amazon) or “Say a simple phrase” (Google).

Along the way you’ll need to sign in with your Google or Amazon account so that IFTTT can successfully hook up to your smart speaker.

Type in the phrase you want to use, which you’ll need to say after “Alexa trigger” or “OK Google” once the command is set up, depending on which speaker you’re using, then click Create trigger.

For the effect part of the process your options are wide option. For example, you might want to start blinking your Philips Hue lights or performing other actions around your smart home devices. You can also use your voice to command outside services like Facebook, Instagram, Twitter, email, Spotify, and others. You’ve got plenty of options to pick from.

You could create a voice command to play a song, or to text a friend, or to unlock the smart lock on your front door. For example, to create an Echo command that calls your phone (in case it’s lost somewhere), choose Phone Call as your action.

So to create a Google Home command to send a tweet, select Twitter as your action, then choose Post a tweet. The {{TextField}} ingredient (the words you spoke after the voice command trigger) should already be filled out as the Tweet text. You can adapt these examples to whatever purpose you like.

That’s the simple option, but if you’ve got an Android phone and a bit of spare cash you can use Tasker ($2.99) and the AutoVoice plug-in ($2.49) as well. The process is a bit more involved but you’ve got more flexibility in terms of the commands you can create—you could switch Wi-Fi and Bluetooth off on your phone, for example, or display a pop-up window on your handset, or start playing some tunes in a music app.

First, you need to get AutoVoice connected. For Google Home, open up the Home app menu, then choose More settings then Services. For the Amazon Echo, head to this page on the web to add the skill to your smart speaker.

With that done, open the AutoVoice app on your phone, tap AutoVoice Devices, then choose the account you’ve also got registered on your speaker. In Tasker, tap the plus button at the bottom, then Event, then Plugin, then AutoVoice, then Recognized.

Tap the pencil icon next to the Configuration heading, then Commands to set up the voice prompts you want to use. It’s up to you which voice prompts you use, though you probably want to avoid using anything that’s too similar to something your speaker already does.

With that done, the commands you’ve created can be linked to any action in Tasker—from changing settings on your phone to launching apps to muting the volume. As with IFTTT, you’ve got a host of different actions to pick from—perhaps the best place to learn all about them is the Tasker website.

As we said, it’s a lot more involved and limited to Android, but for the more adventurous users out there, Tasker does reward the time and effort you put into it. For more help, check out the video tutorial put together by Tasker’s creator.

For the rest of us, connecting up IFTTT is a simple and free way to expand the capabilities of your Amazon Echo or Google Home speaker, if third-party developers haven’t already released a skill or action that does what you’re looking for.