The display beams 3-D objects a centimeter above or below. 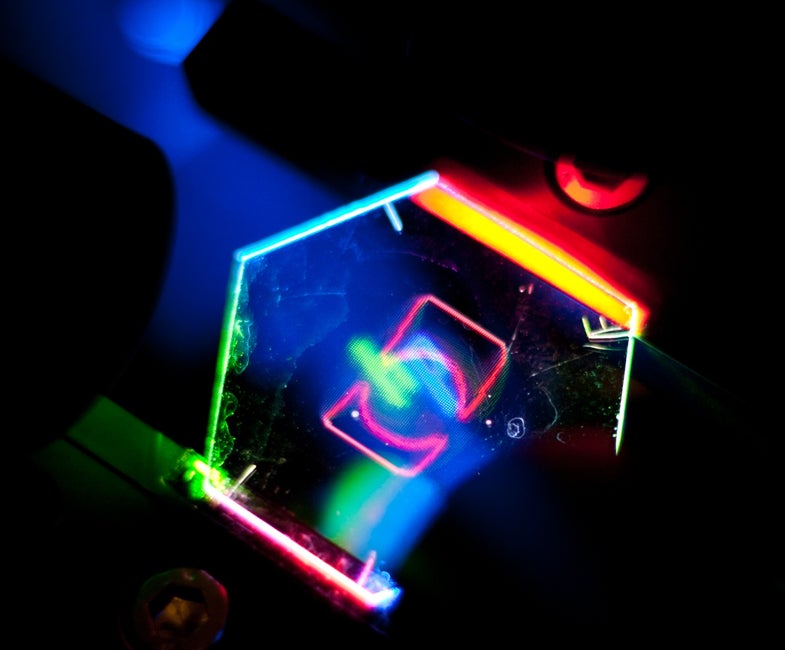 Handheld holograms aren’t here yet, but these little prototypes offer glimpse of what that future might look like. Researchers at Hewlett-Packard Labs have made prototypes of screens that could display 3D images and videos in smartphones, smart watches, tablets and other mobile devices, they say.

In a conference call with reporters, Hewlett-Packard physicist David Fattal described what the tech looked like. “You actually see the object extruded one centimeter either in front of or underneath the display,” he said. You can even tilt the display to any degree you like and see the displayed object from different angles.

As for what these “objects” are, Fattal and his colleagues published a paper today in the journal Nature with some photos of the images they made: An animated HP logo, some rainbow-colored little flowers and stars, and a psychedelically rainbow-colored turtle. The animations work at 30 frames a second, a standard TV rate.

Sadly, this technology isn’t going into any Hewlett-Packard products any time soon, said Ray Beausoleil, the director of photonics research at Hewlett-Packard Labs. “To come up with something that would work, say, at the tablet level, would require a fairly significant investment and engineering that quite frankly we wouldn’t be the best people to do,” he said. “The point of this scientific paper was just to show that there is an approach to 3D displays that is relatively easy to mock up and demonstrate and seems to be ideal for small form factor or mobile applications.”

Labs all around the world are working to make screens that can show 3D, so there’s no guarantee that the first holographic smartphone will come from Hewlett-Packard, anyway. But we’re excited to see this tech progress.

The new displays work with a backlight that has a light-scattering material on its surface. Conventional liquid crystal displays also have a backlight with scatterers on top, Fattal explained. The difference here is that the scatterers send light rays out in very specific directions, instead of in all directions, the way LCD screens do. The rays are directed so that anybody looking at the screen gets slightly different views entering his right and left eyes, creating the 3D effect. The different rays also allow people viewing the screen from different angles to see different angles of the object being shown, like the back of a turtle or the side of a turtle.

To make a display that’s especially suited for mobile devices, Fattal said he and his colleagues focused on making images that have particularly small pixels and high pixel density. You need lots of pixels for mobile devices because people hold those much closer to their faces than they do their TVs. The Hewlett-Packard physicists also tried to make their screens viewable from many of angles. That’s in contrast to some lab prototypes of glasses-free 3D TVs, which don’t work if you sit too far to the side.