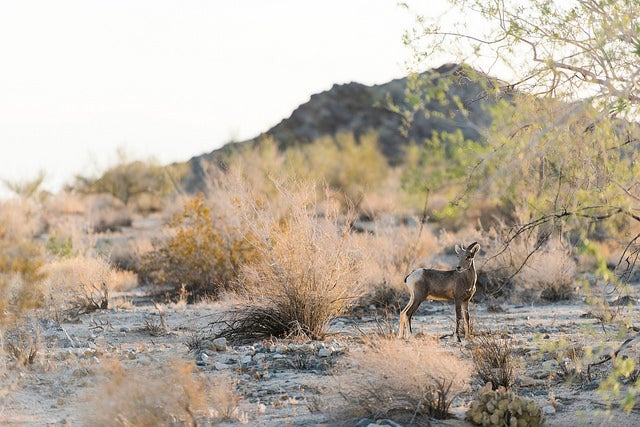 A young bighorn in Joshua Tree National Park, one of the places that stands to benefit from new land preservation measures. NPS/Brad Sutton via Flickr
SHARE

About a decade ago, conservationists asked California Senator Dianne Feinstein to craft a bill protecting lands in the Mojave Desert from development. Feinstein joined the cause, and invited a perhaps-surprising community to participate: off-roaders, who ride their jeeps, dirt bikes, and dune buggies across these rugged desert landscapes.

“In order to achieve the political reality of passage, [the conservationists] had to bring in other stakeholders—off-highway vehicle users, public utilities, renewable energy, big mining, travel and tourism, county government,” says Randy Banis, a member of the California Desert District Advisory Council and an avid off-roader. “The only way to get people to the table is by accommodating their needs within the bill.”

That bill is the California Desert Protection and Recreation Act which proposes a swath of new protected lands including pristine wilderness, new additions to national parks, and recreational areas for off-roaders. It appears set to pass together with a slew of other public lands bills affecting areas nationwide, in what would be the largest land protection measure in a decade.

The California bill provides protections for 716,000 acres of land, including popular off-roading areas as well as wildlife habitat. The actions include designating wilderness in the Mojave and adding new land to Death Valley and Joshua Tree national parks. The desert lands are home to striking, rock-strewn expanses and iconic species, such as desert tortoise, bighorn sheep, and Joshua trees.

“We had to spend many, many months negotiating such things as the boundaries of the proposed wilderness areas,” says Ryan Henson, policy director of the California Wilderness Coalition, who helped write much of the bill.

On Tuesday, those protections were among over 100 public lands measures that passed the United States Senate by a large majority—92-8. “[The passage] shows that by working together we can expand protections for this region while ensuring it remains open for all visitors to enjoy,” Feinstein said in a press release. “The desert is a defining part of California’s landscape and we have a responsibility to preserve it for generations to come.”

The nearly 700-page public lands package, formally known as the Natural Resources Management Act, would also reauthorize the Land and Water Conservation Fund, which expired in September last year. Established in 1964, the program draws funds from offshore oil and gas leasing and invests this money in public access recreation areas. It’s protected 2.37 million acres, including thousands of miles of trails, without using any taxpayer money. “The Land and Water Conservation Fund is an overwhelmingly successful program for achieving balanced use of public lands,” wrote members of the Outdoor Alliance, Outdoor Industry Association, and The Conservation Alliance in a letter to Congress.

The package would also establish over 500,000 acres of protected lands in Utah’s Emery County, creating recreation areas, a monument, and wilderness in the red rock canyons of the San Rafael Swell. This measure follows a similar theme to California’s: it’s the product of negotiations between many interests, including outdoor recreation enthusiasts, ranchers, and local government officials. Hunters and anglers would also enjoy expanded access to federal lands under the new bill.

Other measures include new national monuments in four states, including Mississippi and Kentucky; the expansion of three national parks in Georgia; and the permanent end to mining claims around North Cascades National Park in Washington and Yellowstone National Park’s Montana border.

According to the Washington Post, the measure is viewed favorably in the U.S. House of Representatives, too, and “White House officials have indicated privately that the president will sign it.” In an era of increasing partisan divides, public lands might just be an area of common ground.