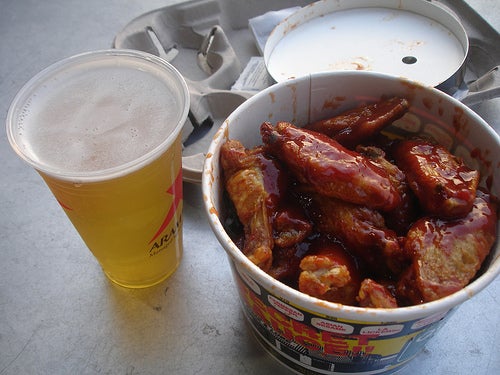 Finally, the scientific finding every man has been waiting to hear: carbo-loading on doughnuts optimizes your lifespan and makes you sexually potent. Too bad the research only applies to crickets (so far . . . ).

In a study recently published in Current Biology, researchers in Australia and New Zealand found male and female field crickets could improve their lifespans with a high-carb, low protein diet. But when it came to reproductive success, the males and females needed very different diets to maximize their baby-makin’. For Jiminy and the fellas, a diet with an 8 to 1 ratio of carbohydrates to proteins was optimum for maximizing sexual activity—in the crickets’ case that means fervent chirping; while the ladies proved most fertile with a carb/protein ratio of 1 to 1, (though that diet led to decreased longevity).

But contrary to what you might think, neither sex naturally gravitates toward a diet that maximizes their reproductive fitness—instead they eat a similar intermediary diet. That’s likely, thinks lead author Alexei Maklakov, because diet choice is controlled by the same genes in both males and females and is optimized for neither.

So what does this mean for your next trip to Applebees–extra breadsticks for dad, more buffalo wings for mom? Well, the cricket diet doesn’t translate directly to humans, but it is likely that we have gender-specific nutritional needs as well. “When it comes to choosing the right diet, we need to look more closely to the individual, their sex and their reproductive stage in life. It may be, for example, that women in their child-bearing years need a different diet to those who are post-menopausal,” says Rob Brooks, another researcher on the project. “It also underlines the important lesson that what we want to eat or, if you like, what we’re programmed to eat, is not necessarily best for us.”