A new pair of high-tech pants monitors the wearer's joints 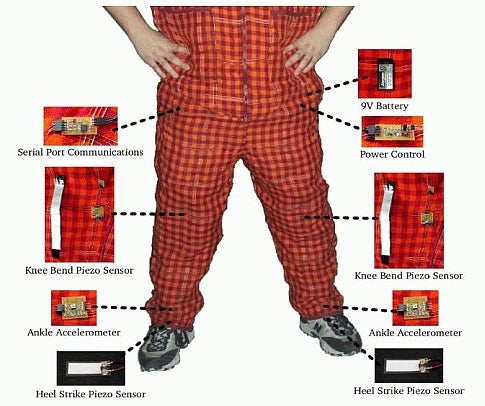 A team of engineers at Virginia Tech University has designed a pair of pants that may identify people who have a high risk of falling.

Several small circuit boards containing microcontrollers, sensors, and communication devices — called e-TAGS — are embedded in the pants at the hip, knee, and ankle joints. Each foot has a piezoelectric sensor—a sensor that generates an electric pulse through applied stress—at the heel that is connected to an e-TAG in the pants. The whole setup is powered by a nine-volt battery attached near the waist.

To test the apparatus, the researchers used a group of nine healthy people, and four elderly people with a history of falling. Each participant was asked to walk on a treadmill at various speeds, while the sensors transmitted data to a Bluetooth e-TAG, which sent the accumulated data to a computer for analysis. Due to the difference in data between the healthy group and the elderly group, the researchers were able to determine which joints had significant instabilities.

The technology could allow elderly people to live independently for longer periods of time, with the pants acting as a warning system. If the person’s gait shows instability in one of the joints, the pants can send a warning to a health care facility, and to the person wearing the pants.