The Biggest Boom in the Universe

With the discovery of a bright, long-lived supernova, scientists believe they have found a spectacular new way for stars to die

Meet pair-instability supernova SN2006GY, the most extraordinary explosion in the cosmos. Unlike its smaller, regular supernova cousins, which blast off the outer layers of a star and pack what remains into a neutron core or a black hole, the pair-instability supernova is a much more violent celestial finale. These events happen only in stars that are at least 150 times as large as our sun and result in total annihilation of the star. Astrophysicists contend that this type of eruption helped seed the cosmos with heavy metals like iron, a process that ultimately allowed planets to form.

Inside massive stars, hydrogen fuses to form helium. Energy released from these reactions, in the form of gamma rays, heats up the surrounding star matter, pushing it outward. This pressure counterbalances gravity [1], which tries to suck the star back in. As a result, the star remains stable—for a while._

In most stars, gravity wins. The star runs out of atoms to fuse and can’t generate enough energy to push back. It collapses into either a black hole or a neutron star, and its shell explodes. But supernova 2006GY was so huge and stayed bright for so long that something else must have happened while it died.

One explanation, the so-called pair-instability model, requires an extremely massive, hot star. Once the core temperature hits 1.8 billion degrees Fahrenheit, the gamma rays born from nuclear fusion in the core spontaneously morph into pairs of electrons and their antimatter twins, positrons [2].

Now the gamma rays that previously counterbalanced gravity’s inward pull no longer exist. Gravity compresses the star [3], transforming the core into heavy elements like iron and nickel. Once the core gets to about 5.4 billion degrees, a runaway thermonuclear reaction [4] blows the star apart, leaving nothing behind.

How We Find Them

California Institute of Technology astronomer Robert Quimby, who found the two brightest supernovae on record, including 2006GY, scans large areas of the sky nightly with a robotic telescope. His search program compares snapshots of the sky on previous nights—essentially looking for bright spots that weren’t there before.

Most supernova hunters neglect to search the cores of galaxies or the areas around massive black holes, because these locales can often turn up too many false alarms. Yet that’s exactly where Quimby spotted his bright light; he decided to peek in there precisely because no one else was doing so.

Use Lots of Eyes

Quimby alerted other astronomers to his potential find. Within a month, astrophysicist Nathan Smith of the University of California at Berkeley was leading a team using a variety of observatories to gather added optical and spectral data. They also used the Chandra X-ray Observatory to measure 2006GY’s x-ray emissions.

_To see more shots of the hypernova and answers to frequently asked questions, launch the gallery here._ 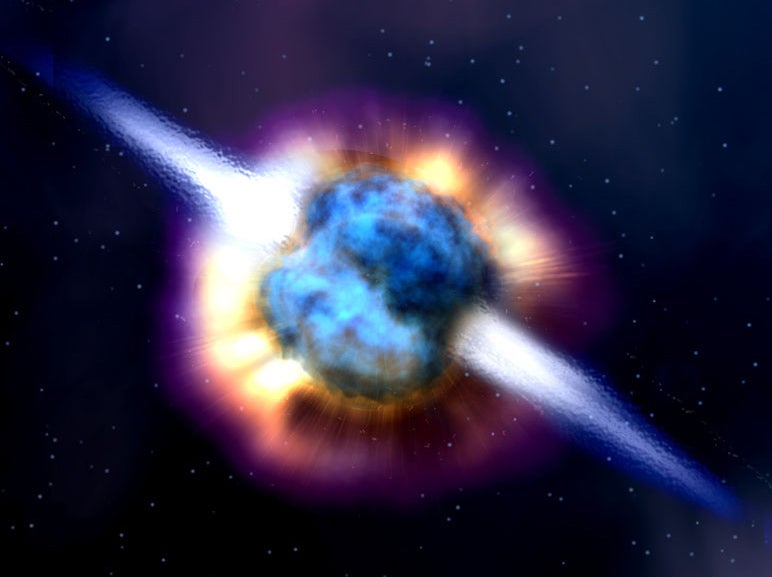 How does a regular star produce different elements?

Fusion in the core combines hydrogen atoms to make helium. If the star is massive enough, this process continues. Helium particles combine to form carbon, and on up the chain to iron. 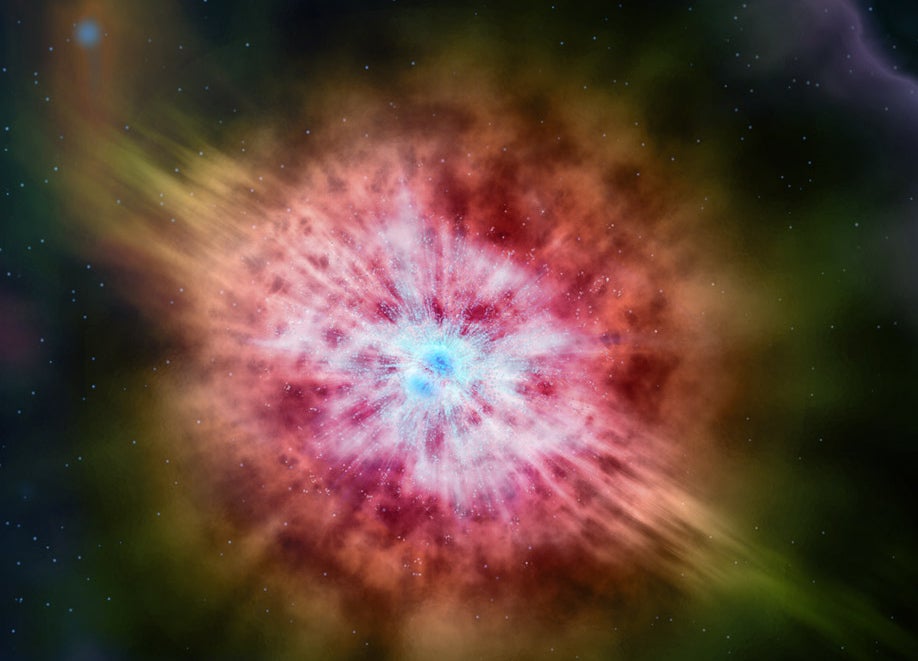 So how do astronomers know that sn2006gy isn’t just a really bright supernova?

SN2006GY was not only far brighter than any previous supernova; it also stayed bright far longer than its predecessors—more than a year, so far. The energy given off by decaying radioactive nickel is what generates the bright light we see in any supernova. Smith thinks 2006GY has stayed bright for so long because it dispatched much more nickel. 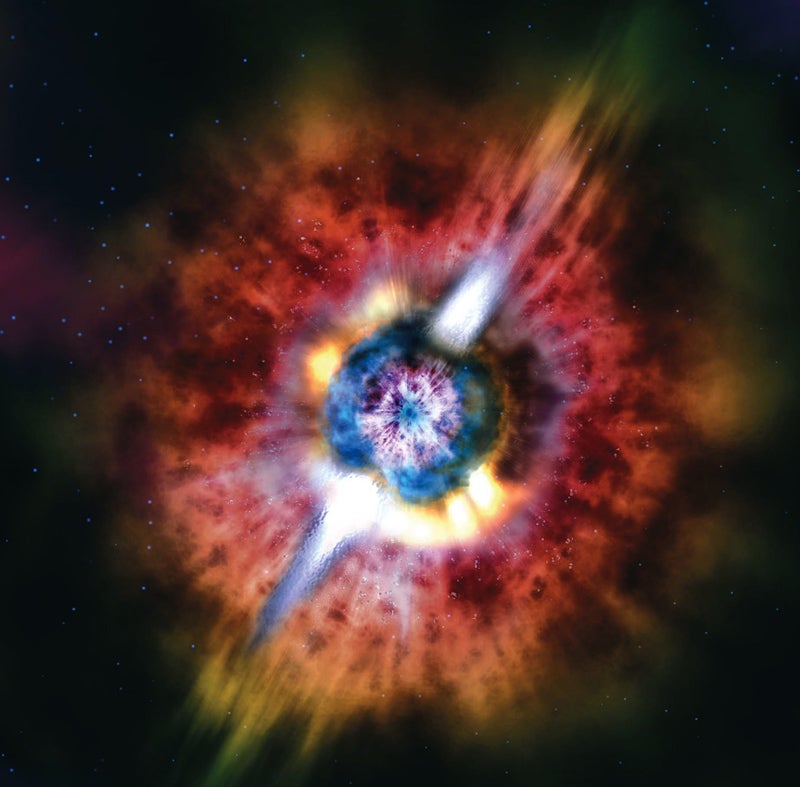 And how do they find out for sure?

More observations. If they’re right, researchers should be able to match the dimming of 2006GY to the radioactive decay rate of nickel. 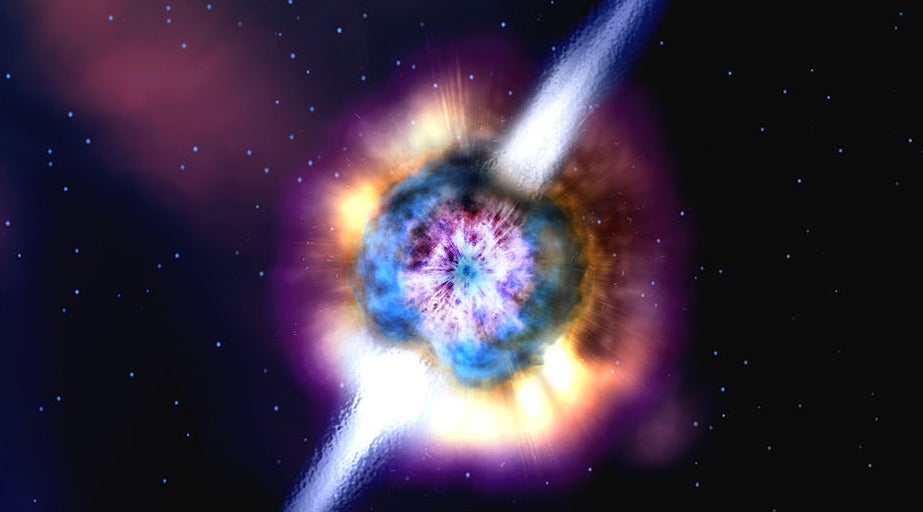 What dictates how a star will die?

Scientists are just beginning to understand the intricacies of star death. Such factors as the composition of the star (is it mostly hydrogen or mostly heavier elements?) and its mass will determine if a star ends up a white dwarf, a neutron star or a black hole. 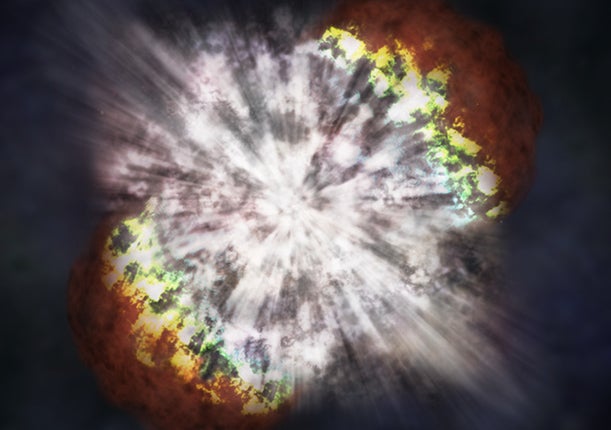 What will happen to our own sun when it dies?

In about seven billion years, it will blow off its outer layers of hydrogen and helium, exposing a dense, slowly cooling core of carbon and oxygen known as a white dwarf. Or, as Quimby puts it, “It will never really die. It will just kind of fade away.”
feature
june 2008
supernovas
Technology