For the modern soapbox derby, all you need is gravity–and $30,000 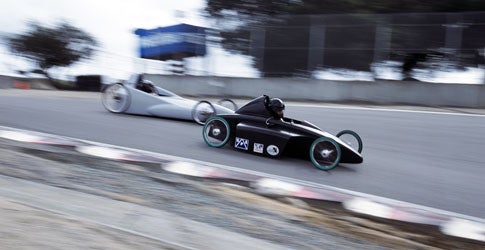 Forget about primitive wooden contraptions driven by towheaded tykes down a homemade ramp in Your Hometown, U.S.A. The new–make that the extreme–take on the quaint old soapbox derby features sleek, futuristic projectiles riding on chassis meant to accommodate speeds of 50, 60, even 70 miles an hour.

On August 18, aerodynamically optimized engine-less racecars built by engineers and stylists at nine automobile manufacturers will race wheel to wheel while hurtling down the intimidating curves of Mazda Raceway Laguna Seca in Monterey, California. “I don’t know where this is going,” says Don MacAllister, founder of the Extreme Gravity Racing (XGR) series. “But it could turn into a mini Formula One.”As in traditional soapbox-derby competition, gravity still rules, but the materials, fabrication techniques and costs have moved into the 21st century. Computer-aided design and carbon-fiber components are commonplace, and engineers are experimenting with demon tweaks ranging from formula-car suspensions to tires that are integrated into the wheels. Several teams used computational-fluid-dynamics programs to shape the swoopy bodywork. Some even tested their cars in wind tunnels.

The cost of building these racers is impossible to calculate because so much time, labor and material was donated or sponsored. Still, if you were to factor in all the R&D, the most exotic of the bunch would cost upward of $100,000 to replicate. As for the countless hours that designers and engineers are devoting gratis: priceless.

“To be fair to the company, we work on the project only during lunch and after hours,” says Steve Anderson, a research and design strategy manager at General Motors. “But it’s one of those things that’s in the back of your mind all the time.” Says Ron Schram of Mazda, “I spent half of my vacation working on this thing. The hours that we’ve put into it are ridiculous.”

The Extreme Gravity Racing series consists of two separate-but-equal race components. Bentley and the Southern California design studios of Chrysler, GM, Mazda, Nissan, Volvo and Volkswagen/Audi are competing in the DesignSeries. There’s no prize money at stake, just bragging rights. “We know all the designers at the other Southern California studios, and this is really our only chance to compete directly against them,” Nissan design manager Robert Bauer says with great relish. Or as Volvo designer Blair Taylor puts it, “Last year it was like, â€Hey, this is fun.’ This year it’s like, â€You’d better win.’ “

But anybody (well, anybody with a lot of disposable income and the desire to dispose of it) can play in the CorporateSeries, which will have its own race in September in Southern California. MacAllister commissioned six identical cars from Bentley and six more from Pininfarina. They’re being sold to the public for $30,000 a pop, a price tag–which benefits a foster-child program–that includes driver training, crew support and wine-and-cheese VIP treatment during the race weekend.

It’s a far cry from the quintessentially grassroots soapbox derby, a slice of Americana that has fascinated kids for the past seven decades. Conceptually, not much has changed since the first event was staged in 1934: Build a small, simple racecar out of wood according to tightly constrained rules, and coast down a short, straight racetrack powered by nothing more complicated than gravity.
But gravity racing has gone extreme in recent years, fueled by the popularity of skateboards and street luge. In 2001 a high-tech, high-speed variation on the derby theme was inaugurated in England down a twisty hill at the prestigious vintage racing event called the Goodwood Festival of Speed. The event attracted not only automobile manufacturers such as Ford, Honda and BMW but also race teams such as McLaren and Lotus. The concept went over so well that MacAllister, who was already staging traditional soapbox-derby-style events in California, decided to import it to the States.

In 2003 Mazda and Porsche faced off in an Extreme Gravity Racing exhibition in Irvine, California. Last year Nissan, GM, Bentley and Volvo joined the fray. This year, the new players are Volkswagen, Audi, Chrysler and Pininfarina. Meanwhile, Porsche will make exhibition runs in its 2003 XGR racer, and Lamborghini and Oakley, the sportswear manufacturer, have made verbal commitments to join the starting grid.

The competition this year will be stiffer, and the new format–furiously freewheeling down almost half of what is arguably the most famous road-racing circuit in North America–will demand considerably more sophisticated designs than the ones raced last year in Southern California on a wooden ramp that limited top speeds to a paltry 22 mph.

Tame as last year’s event might sound, though, it drew a bunch of intriguingly out-there designs. Porsche finished second with the Soapboard, a three-wheel job that was driven face-first, while Volvo placed third in an even wackier model that looked like a faired-in bicycle with mid-mounted training wheels. General Motors’s winning entry, on the other hand, was simplicity itself (they didn’t call it the Flying Shoe because it looked like an F-117 Stealth fighter). The secret of its success, Anderson explains, was its long nose, which pushed it farther up the starting ramp than any of its rivals, thus giving it all the mo’ it needed to whip the competition.
But this year’s race won’t be won by an engineering version of a one-trick pony. Instead of rolling straight down a relatively shallow ramp, the cars will start at the highest point of Laguna Seca and then skate down 170 feet–the equivalent of 21 stories–while negotiating several near-90-degree corners.

During a test session in March, Taylor managed 53.6 mph on a Volvo trike running sans bodywork. “It was hair-raising,” he recalls. “I don’t want to do that again without four wheels.” Jim Shaw, the head of Bentley concept engineering, who started designing and driving the Bentley entries at the even trickier course at Goodwood, is expecting to hit 50 mph and 0.7 G at Laguna Seca. “At that speed,” he says, “it starts to get a little bit scary.”

All the designs must fall within narrowly defined parameters. The maximum dimensions are nine feet long, four feet wide and four feet high, and the maximum weight is 320 pounds. (In most forms of racing, designers make cars as light as possible, but in gravity sports, weight is an advantage.) Four wheels are required. So is a feet-forward driving position, rollover protection, and workable steering and braking systems.

Sounds like a car, right? That’s just what Ron Schram thought. A senior engineering technician at Mazda, he’d never before created a chassis. “I had no idea how to design the thing,” he says. “But I knew a lot about the Miata, and I knew it worked. So the track and wheelbase [of the gravity racer] are scaled down from the Miata. And I copied the suspension from a Star Mazda”–a single-seat, open-wheel racecar. Mazda’s creation will be clothed in bodywork styled by design director Truman Pollard.

Mazda’s unique tweak: Sand-buggy rack-and-pinion steering bought off the Internet.
Nissan’s Bauer, like most of his rivals, opted for solid axles rather than a full suspension. In fact, his design, the Flying Torpedo, has less in common with cars than with bicycles, and he has hooked up with a company that specializes in streamlined human-powered recumbents that have topped 60 mph. “We think aerodynamics are critical,” Bauer says. “Our approach is to minimize frontal area. It’s all about how the air â€sees’ the front silhouette and, secondly, how the air comes back together.”

Nissan’s unique tweak: Biasing the weight to the left for a high-speed left-hand corner.
At Volvo, Taylor is leading a team consisting of a packaging engineer, a safety engineer, a color and trim designer, an aerodynamicist and a modeler. “We felt that it was important to have something that was visually stimulating,” he says. “It had to be aerodynamic, but I didn’t want it to look like a bar of soap. The general theme is a central core with fenders that look applied. I was inspired by the image of an eagle diving for a trout with its wings tucked in.”

Volvo’s unique tweak: A shape representing a symbolic, Volvo-themed crush zone.
Alan Barrington, another designer leading a multidisciplinary team, is fashioning Chrysler’s first XGR entry as a racer that’s slick as well as quick. “Think of movies like The Rocketeer and The Aviator, Deco-ish cues from the early part of the century, with the form language of the Chrysler Crossfire,” he says. “We’re taking those cues and applying modern technology such as carbon fiber and billet aluminum.”

Chrysler’s unique tweak: Cable steering system designed for a powerboat.
To which Shaw says, dismissively, “The competition is all about making a statement. But for us, this is about going fast, not looking good.” The closed-cockpit Bentley is the most technologically ambitious XGR car, featuring a proprietary solid wheel/tire mounted on a full suspension, all sheathed in a metal-composite body built according to a Bentley patent. “It’s important that I try new things,” Shaw says. “Last year I was using vacuum castings. This year I’m using new fabrication technology, really groundbreaking stuff. I’m going to apply aerospace technology to the car.”

Bentley’s unique tweak: Slight forward-weight bias for more responsive steering.
But Anderson, the defending champ, has a message for the Bentley boys: “What won it for us last year was being pure and simple,” he says. “You don’t want to overthink this.” Although his body will incorporate some carbon fiber (along with balsa wood), the chassis is fabricated from everyday steel, and the two straight axles are connected to off-the-shelf cycling components. “Mechanical simplicity is what we’re looking for,” he says. “Aside from aerodynamics, the biggest gains are going to come from minimizing rolling resistance and making it through the corners with as little correction as possible.”GM’s unique tweak: Self-correcting steering actuated by small shock absorbers.
The cars will practice at Laguna Seca on August 17 and race the next day. MacAllister was originally leaning toward a time-trial approach, but after getting an earful from the amped-up participants, he’s agreed to let cars go down the track two at a time. As Shaw says, “It’s not much of a spectacle if you’re not racing wheel-to-wheel. And we’ve all got blood in our veins.”

The CorporateSeries cars being offered for sale to the public will make their debut in a second race on September 17 on a daunting downhill stretch of Shady Canyon Drive in Irvine. Although these XGR racers were built to the same specs as the ones featured at Laguna Seca, the designs have been simplified, and the cockpits are open so that they will accommodate a broad range of drivers.

This year the CorporateSeries cars are the work of just two companies, but that could change. “We’ve had at least 20 or 30 independent shops call us, wanting to get involved,” MacAllister says. “I think we’re launching a new sport.”