Three years after its Human Transporter was supposed to change the world, Dean Kamen's innovation factory unveils a successor that just wants to have fun.

I’ve just stepped onto the factory floor at Segway world headquarters in Bedford, New Hampshire, when two engineers sporting matching jeans (tapered), shirts (plaid) and hairlines (receding) glide by and shoot me matching expressions (grins). “Doesn’t anyone walk around here?” I ask, as the distinctive, almost melodic hum of the Human Transporter (HT) trails off. Segway development engineer David Robinson responds with a different expression, this one more quizzical than the one on his colleagues’ faces. “Would you?” he asks.

It’s the sincere incomprehension of the true believer, and it sucks me in. Of course not, I decide–if I had an HT, I’d never walk again! I’m here, three years after the hyped introduction of the HT–the original Segway–to be the first outsider to view its sequel, which the development team has code-named Centaur. As we plod in our pedestrian way across the floor, past palettes stacked eight high and two deep with boxed HTs ready for shipping (whether this is a sign of success or failure, it’s hard to say), I mentally scroll through all the PR I’ve been fed about the Centaur. It’s a gyro-stabilized indoor/outdoor ATV that can reconfigure itself to glide on two wheels. It’s twice as fast as an HT but equally clean and quiet. “It’s like nothing you’ve ever seen before,” Segway’s chief technology officer, Doug Field, had told me during an earlier phone conversation. “If the HT is the helicopter, this is the Harrier jet. It can hover, but it can also be in a high-speed configuration when that’s advantageous.”

Robinson and I continue past a small obstacle course of ramps and rocks used for advanced product testing and then out a back door onto a grass slope that I’m told is typically reserved for work breaks and summer parties (as evidenced by a strip of grass that’s been browned by a Slip ‘N’ Slide). My first sight is of two more engineers, clad in the Segway bluejeans/plaid-shirt uniform, riding in circles and popping wheelies. The Centaur looks, well, like nothing I’ve ever seen before–although it does remind me vaguely of one of those sidewalk-hogging Bugaboo baby strollers that have recently been popping up all over Manhattan.

Umm. “It’d be the sweetest lawn mower ever,” I say,
trying to mask my disappointment. Field, ever the true believer, laughs and tosses me a helmet.

So here is the crux of the Segway dilemma: Beautiful as these machines may be, and however marvelous from a pure technological standpoint, the appeal isn’t something you can get just by looking at them. Add a few industrial-size dollops of hype, and the resulting deflation feels vertiginous. Before its 2001 launch, the much-
ballyhooed gyro-stabilized two-wheeled HT was postured by Dean Kamen, Segway’s hubristic leader, as the scooter that would revolutionize transportation to at least the same degree as the automobile did a century ago. “Cities will be built around it,” Steve Jobs prophesied. But when it was finally unveiled, on Good Morning America, Diane Sawyer blurted, “That’s it? That can’t be it.” No wings, no booster rockets, no time travel. Just an oatmeal-colored rolling T-bar.

“When people see the HT, they’ll say things like: Where’s the stuff that makes it stay up? What makes it go? Where’s the power? Where’s the engine?” says Robinson, Project Centaur’s team leader. And to the Segwayites, that’s precisely what’s cool about it. But only when you step onto the HT’s platform can you truly grasp the allure of the device. Gliding down the street, leaning forward to go and back to slow, is good fun, regardless of how goofy you look.

And how many people get the opportunity for such a direct conversion experience? Segway won’t disclose how many HTs have been sold, but clearly the vehicle is falling short of the change-the-world mark. You rarely see one
of the things rolling down the sidewalk, even in cities full of rich technogeeks willing to shell out $4,000 for a cool plaything. Finally, though, it appears that Segway is smartening up and coming to grips with the fundamentally experiential charm of its product. Until recently, the only way to buy an HT was to make a blind-faith purchase on the company’s Web site or Amazon.com. This year, though, Segway licensed 60 dealerships across the country. You can now walk into, say, a Brookstone, and actually get HT religion through a laying-on of the hands.

Meanwhile, we haven’t seen a new product from Segway in three years. Skeptics assume that the company can’t secure the venture capital necessary to sustain the HT and to support another project (rumor has it that Kamen poured millions of his own into the machine). But according to Field, although no outsider has been given a peek until now, Segway has been engaged in a process of intensive “innovating,” churning out hundreds of concepts a year in hopes of finding one that the boss will give the green light to bring to market. “The idea is that you have to fail a lot of times to succeed a few,” he says.

During intense periods of innovation, it’s not uncommon for the seven members of Segway’s core design and engineering team to spend 12 hours a day in a secret key-card-guarded lab, dreaming up new products. No suggestion, no matter how improbable it may seem, is immediately dismissed. As Field puts it: “Ideas need to germinate. I mean, you don’t plant a seed, then dig it up every few minutes to see how it’s doing.” Using supplies ranging from Home Depot-style PVC pipe to plywood to junkyard scraps, early prototypes are often amateurishly welded by the team right there in the lab. Most of these contraptions end up on the lab’s shelves, ready to be assimilated into the next, better idea that comes along.
What I’m staring at on the lawn is the outcome of this process of innovation: a Segway with four wheels. Seems like a pretty natural product-line extension. Field is the first to acknowledge that the Centaur has a tremendous amount of HT DNA–the entire base, stuffed with tilt
sensors and gyroscopes that allow it to balance, is an HT. But, he adds, it was hardly as simple as adding two more wheels. The steering, for example, is part mechanical, part drive-by-wire. Two sensors in the steering column calculate speed (from the throttle) and angle of turn (from the handlebar) and send the data to computers in the base. Integrating that information with readings from the tilt sensors and gyros, control boards adjust the speed of the
independent rear wheel motors 100 times a second to keep the machine upright.

The idea of a machine that rides on four wheels or reconfigures itself to float on two had, unsurprisingly, been bouncing around the lab since the HT. By building on the HT platform, the team recognized, they could create an extremely maneuverable, speedier ATV-like vehicle that could pick up its wheels to climb over obstacles. Eventually the engineering brain trust strapped a plywood model to an HT power base and rigged it with a broom that could be pushed down, like a lever, to lift the front wheels off the floor. A video reminiscent of the Little Rascals is evidence of initial success; in its maiden voyage, the tilt sensors and gyroscopes in the base do their job, and the first prototype pops a well-balanced wheelie.

After months and months of riding around on what Field describes as “really shaky, scary concepts,” the team was able to churn out a final prototype in just four weeks. The Centaur won’t necessarily become a consumer product, but it’s no longer a nebulous concept either. Kamen has taken it for a spin and has anointed it viable. If Segway’s market analysts agree, the Centaur could drop its code name and be a real product by late next year. “We’ve proved that we can make it work and that we can make it very attractive. Now it’s a business decision,” Field says. “There are no great plans for production at this point, but if they want to build it, we could move extremely quickly.”

For Segway, the stakes are high, and the bet is characteristically quixotic. The HT hasn’t (yet?) caught fire, so why
introduce another product whose appeal is sealed only through experience and whose natural market would seem to be
nichier even than that of the niche HT–ideal for a theoretical subset of ATV enthusiasts and industrial workers looking for a clean, quiet, extremely maneuverable machine? “Real breakthroughs never occur from market pull or business briefings,” Field says, preaching the Segway gospel. “Real breakthroughs almost always come from technical exploration and people trying to solve problems before they even know why they might want to solve them. Our goal is to give the business as many ideas as possible. We kiss a lot of frogs, but this one happens to be a prince, and that’s why it’s out seeing the light of day.”After listening to a five-minute here’s-how-to-not-kill-yourself tutorial, I strap on the helmet, throw a leg over the machine, and plant my feet on the pegs. I squeeze the throttle and take off. I’m hauling. I shift my weight back and gas it up the Slip ‘N’ Slide hill. Suddenly, at the crest,
I find myself balancing on my back wheels. I swear the machine read my mind. I lean in, and the Centaur glides
forward. I lean back, and it drifts in reverse. I turn the handlebar, and although the front wheels it controls are dangling three feet above the ground, the Centaur pirouettes on its axis. I release the throttle, and the front wheels fall to the ground, automatically aligning themselves on their way down. I can’t see, hear, or smell the technology, yet it’s unmistakably there.

The experience of moving and balancing this machine in ways that are physically astonishing is a rush; it’s like I’m getting away with something illegal. I balk when it’s time to get off, and take it for a final spin around the lawn. My adrenaline has kicked in, and the insides of my thighs feel bruised. I reassess the possible applications–park-ranger rover, gentleman’s ATV, killer lawn mower–and add “really fun toy for Jenny” to the list. 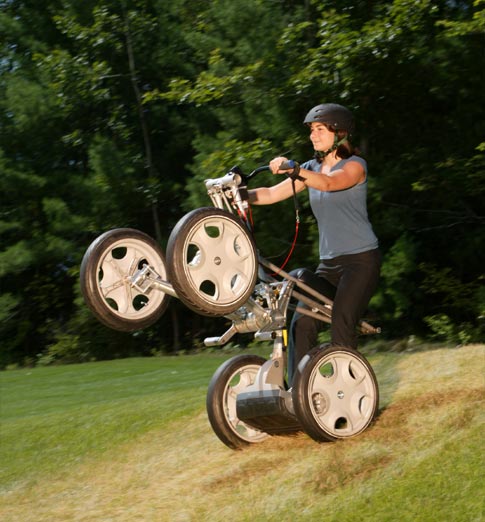 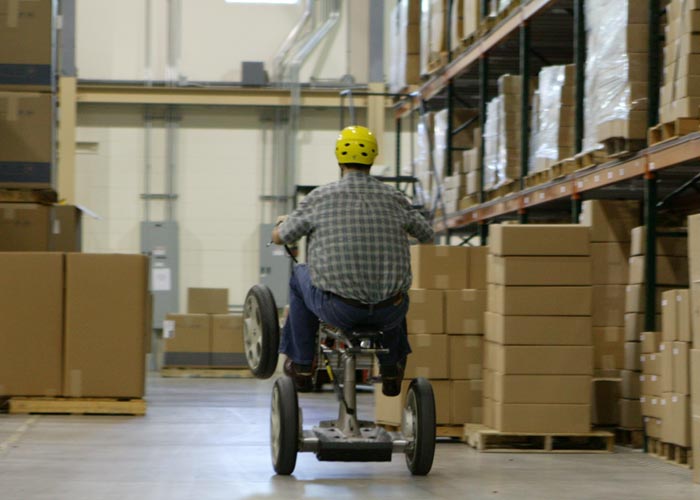 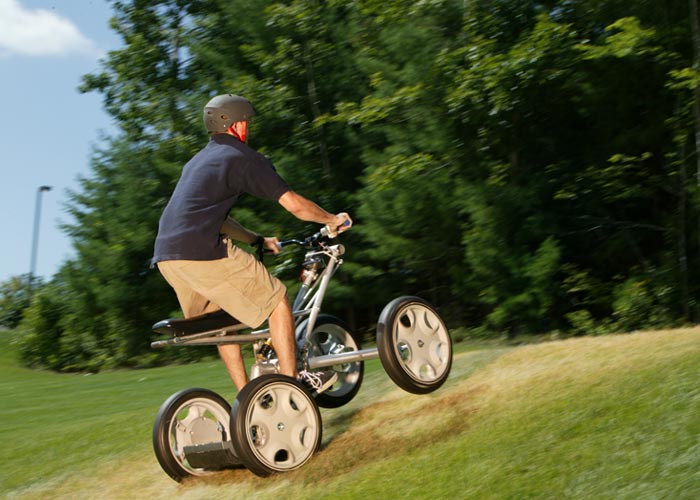 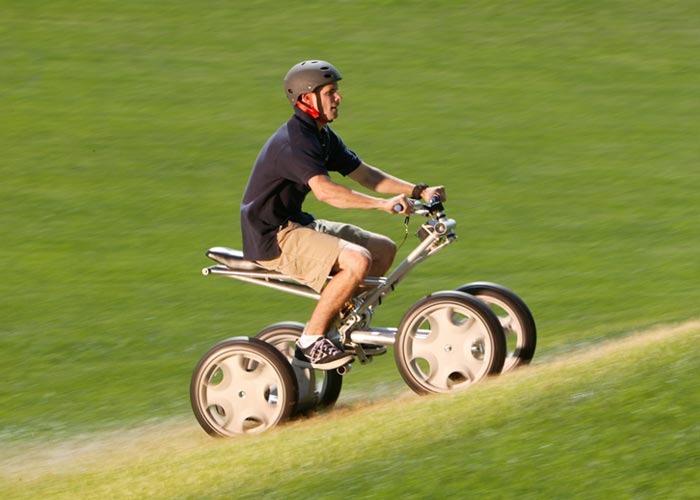 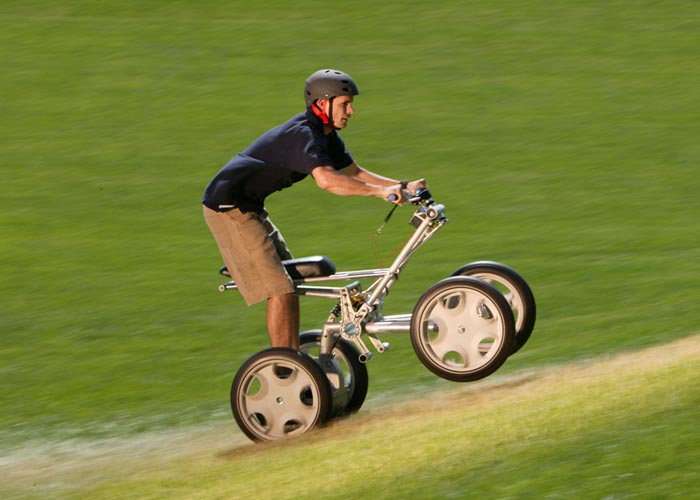 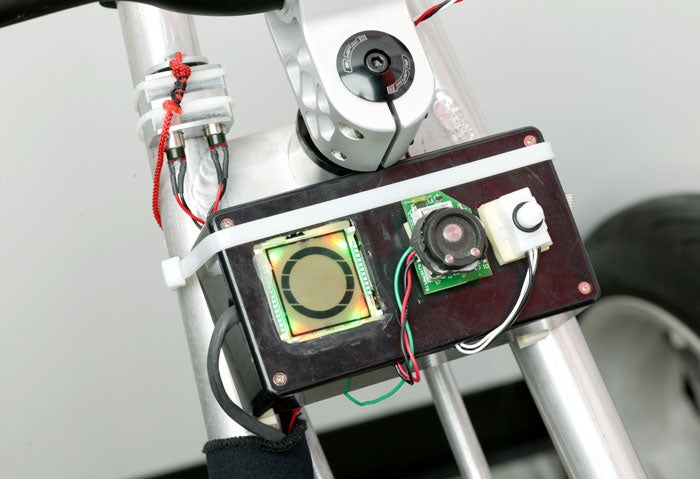 As the rider leans, tilt sensors set in an electrolytic fluid [1] track which way is down. Meanwhile, five electric gyroscopes [2] detect changes in motion. A magnet constantly pulses, stretching and then squishing a conductive ring. External motion–such as when a rider leans forward or back–disturbs the ring’s pattern. Sensors pick up this disturbance and measure how the rider is leaning. Controller boards [3] integrate this data with data from the tilt sensors and adjust wheel speed to maintain balance. 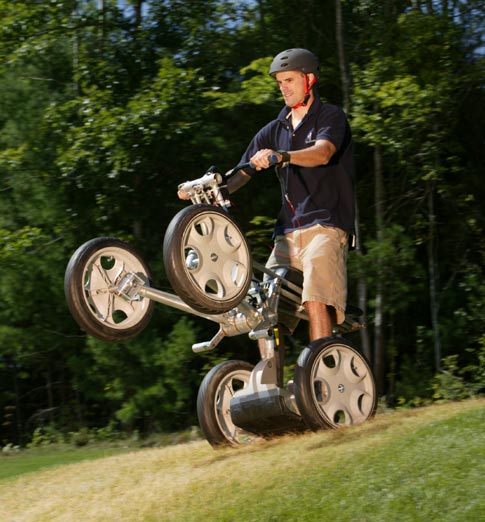 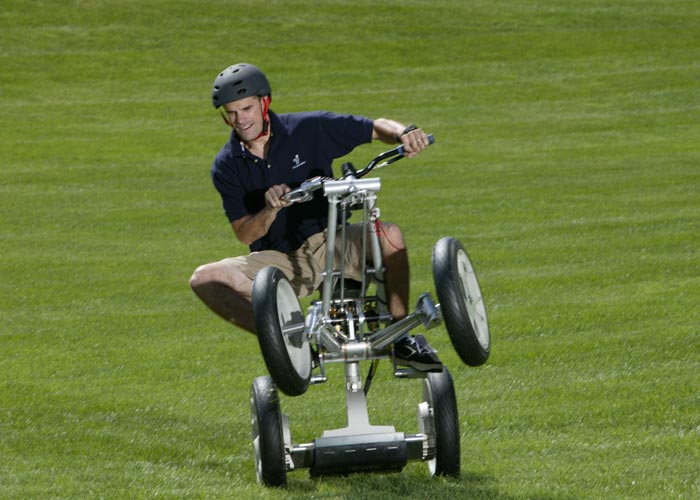 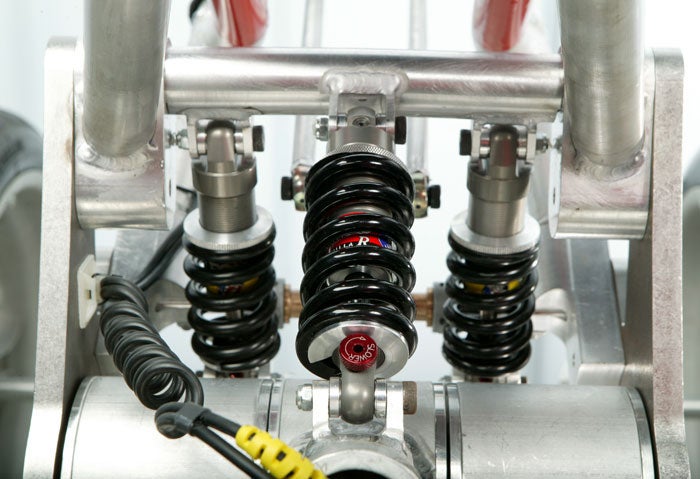 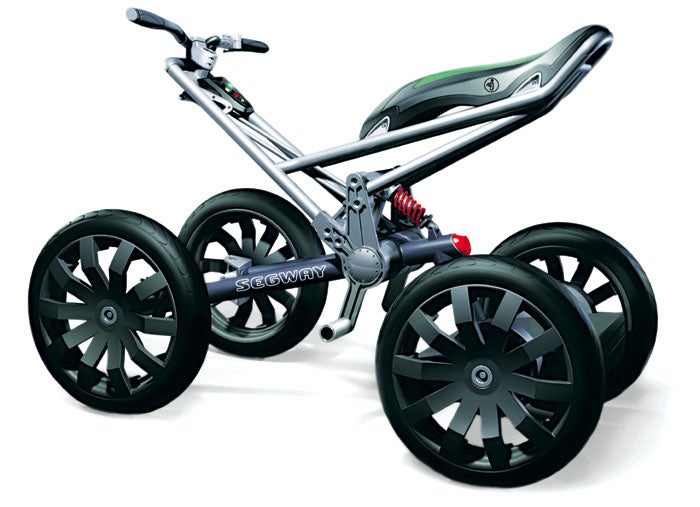 “Man max, machine min,” recites manager of industrial design Scott Waters, echoing a Honda catchphrase. Abiding by this law of design, Waters worked with the engineering team to build a steering system that juts in toward the Centaur’s center and then back out to the wheels. This not only hides the mechanical linkages and creates a slick X-shaped profile, but also removes tech clutter from the rider’s sightlines, providing an undisturbed view when the Centaur is up on two wheels. “Every part, every angle has a distinct purpose,” Waters says. Top speed: 25 mph; range (on a single charge) 10-15+ miles; max. payload: 400 lbs.; size: 58×35 inches; weight: 140 lbs. 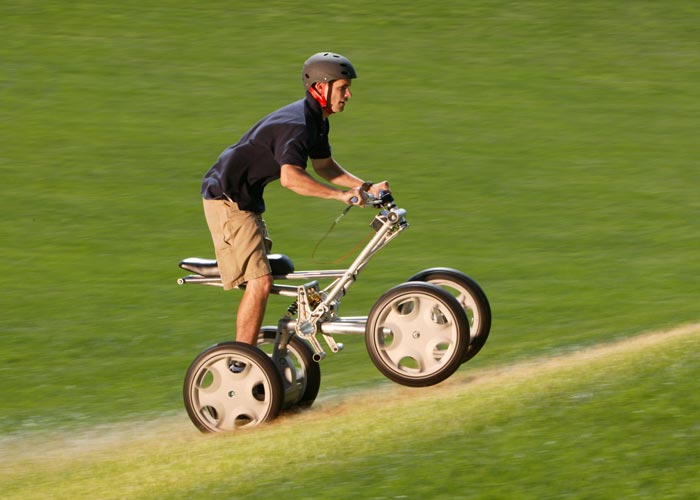 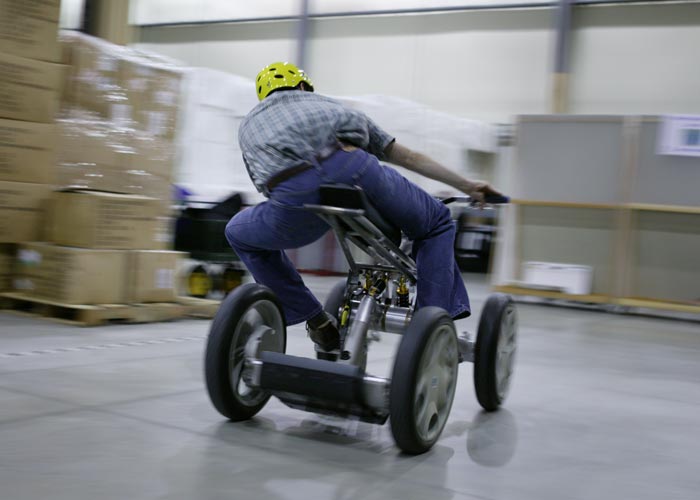 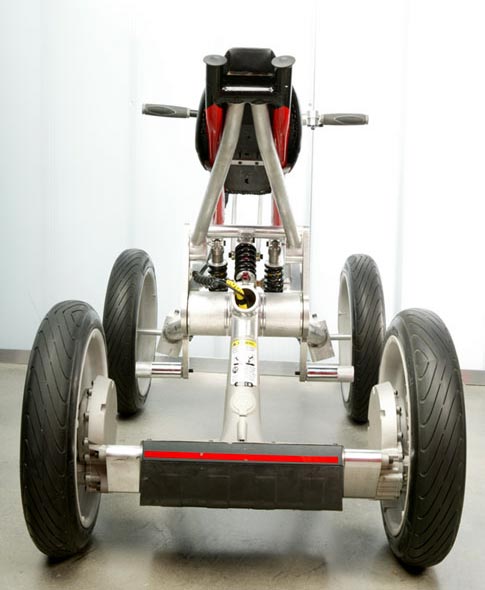 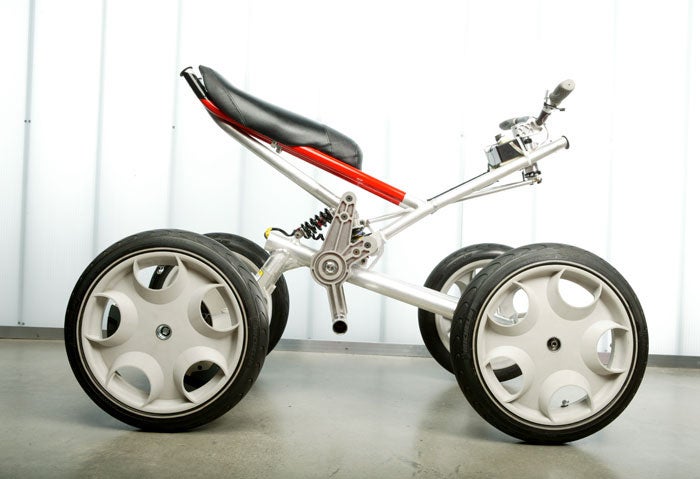