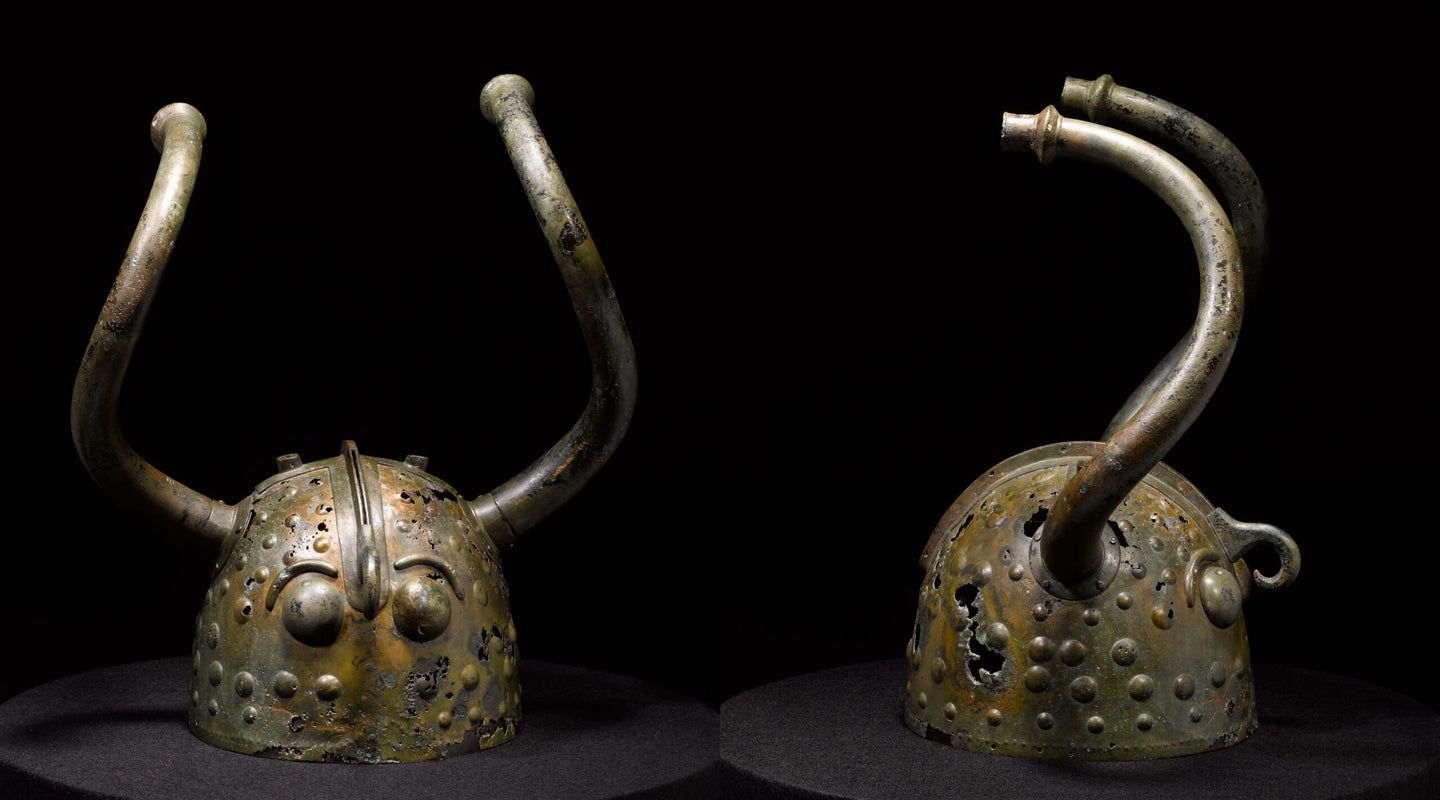 The Veksø helmets, discovered near Copenhagen in the 1940s, are part of a larger mythology in Bronze Age western Europe. Roberto Fortuna and Kira Ursem, Courtesy National Museum, Denmark
SHARE

Picture some Viking warriors. What are they wearing on their heads?

Probably a helmet, right? Does it look like the one below?

The first thing that probably jumps out to you here is that there are no horns. The helmet, discovered at a Norwegian farm in the 1940s, is one of the few complete Viking helmets ever discovered. Crucially, none of them have horns.

The idea that Viking helmets ever even had horns is surprisingly recent, despite the fact that the culture is well-documented in written history. According to historian Roberta Frank’s summary of the horned-helmet myth, Vikings were first given their horns in an 1876 German production of a Wagner opera. Within 25 years of the show, horned helmets were synonymous with the Scandinavian raiders that colonized the British Isles and sailed to North America around 1000 CE.

The thing is, horned helmets did exist in northern Europe—but they predated the Vikings by at least 2,000 years. They’re products of a Bronze Age culture that predates written records in the region.

The Viksø helmets, as the pair is called, were discovered in 1942, buried in a peat bog near Copenhagen. They’re made entirely of bronze, including the twisted, bull-like horns. They’re probably not objects meant to be worn into battle, but are closer to religious gear, intricately decorated with a curling beak and two bulging eyes around the forehead. Recesses in the crown of the helmet likely held a horsehair crest, and a pair of long feathers.

These ornate helmets actually represent something more mysterious than Viking intimidation: the emergence of a new mythology, and possibly politics, in the time before written history.

In a new study, a team of Danish archaeologists scraped off a fingernail’s width of the organic glue used to hold the horns in place. Radiocarbon dating of that substance showed that the glue was last applied—and therefore helmets were likely last used—somewhere around 950 BCE.

That was a period of tremendous turnover in western and northern Europe. Scandinavians began trading with Phoenecians, a seafaring empire in the Mediterranean. “When these changes happened in the trading networks, there were other changes connected,” says Heidi Nørgaard, the senior author on the new research and an archaeologist at Denmark’s Moesgaard Museum. “Building structures were changing. The cosmology was changing. Burial rites were changing.”

The Veksø helmets hint at how the people living through those fluxes might have understood the world. The horns match imagery found in rock art in southern Spain and the nearby island of Sardinia from around the same time, as well as bronze figurines in Scandinavia.

All of the horned figures are drawn alongside swords and axes, and often ships and chariots, which another author on the new research has argued are religious symbols linked to the movement of the sun. In Spain, there’s an extra emphasis on the beauty of the horned figures, represented with combs and other cosmetic tools. And all of the artifacts appear within 200 to 300 years of one another, says Nørgaard. Over that time, the horned figures grow, and become the centerpieces of rock art.

Together, the images suggest a culture that was beginning to define itself around warlike, potentially divine individuals—what Nørgaard and her co-authors describe as “a new social regime backed by a mixture of political and religious power.” Graves from the time, excavated in Denmark and Germany, seem to hold some of those powerful individuals, sometimes described as Bronze Age royalty. “They erected huge burial mounds,” Nørgaard explains. “They built a wooden chamber in the mound. They added gold artifacts, and they added huge drinking vessels. These are two examples from the northern fringe, but this kind of burial was all over Italy.” That’s in stark contrast to earlier, more egalitarian-seeming funeral practices—suggesting that this symbolism may have accompanied a new kind of hierarchy.

In the German site, the dead were buried with an array of metalworking tools, but not a complete set that a craftsman would need to do their job, Nørgaard says. In other words, they may have been symbols of power, rather than the dead person’s trade. Scandinavia doesn’t actually have sources of bronze, and so all of the raw material needed to be brought in via trade. “In these huge rich burials,” she says, “You have signs of this control over craft and resources.”

As it happens, the logic of putting Vikings in horned helmets might not have been so different from the actual Bronze Age societies that crafted the headgear. Frank writes that the motif of horned Viking helmets came out of “an expansionist, empire-building era” fascinated with violence, nationalism, and individualism (trends that would lead to the First World War within decades.) It’s possible that the Viksø helmets were meant to embody similar values. “I find it fascinating that we still today are connecting horns and warriors,” says Nørgaard. “It supports this assumption of strength.”