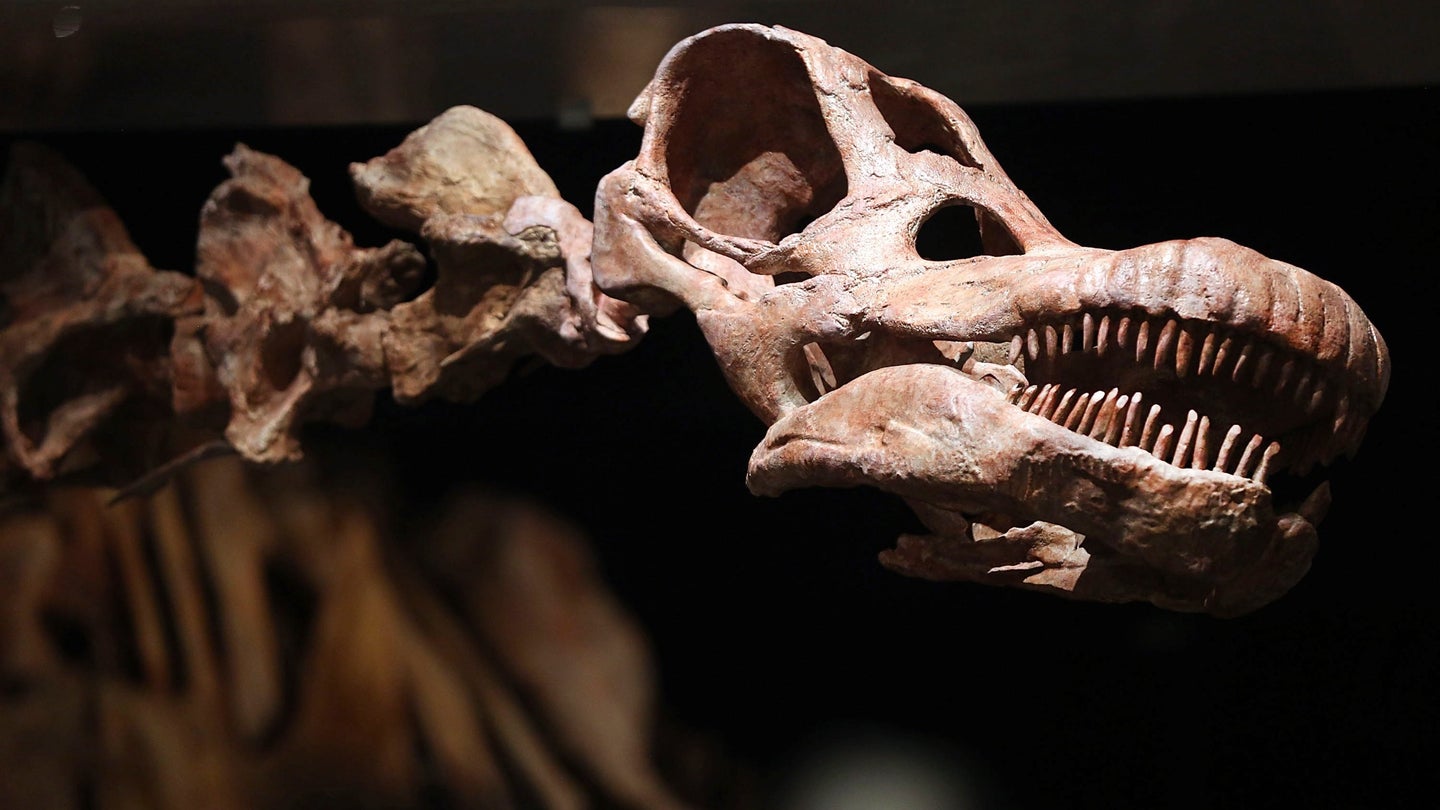 This replica of the Titanosaur in New York City weighs about 70 tons, is 17 feet tall and stretches to nearly 122 feet long. Photo by Spencer Platt/Getty Images
SHARE

With some species clocking in the same size as present day whales, titanosaurs were some of the largest dinosaurs to ever walk the Earth. Living from the Late Jurassic Epoch (about 163.5 million to 145 million years ago) up until the end of the Cretaceous Period (roughly 145 million to 66 million years ago), these herbivorous sauropod dinosaurs ranged from 23 to 85 feet long, depending on the species.

Now, a discovery of these dinosaurs in one of their smallest forms is revealing intimate details about the lives of these gentle giants. In excavations between 2017 and 2020, a team of researchers discovered more then 250 fossilized eggs in 92 nesting sites in central India’s Lameta Formation The findings are detailed in a study published January 18 in the open-access journal PLOS ONE.

The Lameta Formation in the Narmada Valley is well known for fossils of dinosaur eggs and skeletons from the Late Cretaceous Period. Scientists first found dinosaur eggs in the region in the 1990s, and this study focuses on on a nesting site in the Dhar district.

“Together with dinosaur nests from Jabalpur in the upper Narmada valley in the east and those from Balasinor in the west, the new nesting sites from Dhar District in Madhya Pradesh (Central India), covering an east-west stretch of about 1000 km [621 miles], constitute one of the largest dinosaur hatcheries in the world,” said Guntupalli V.R. Prasad, a study co-author also from the University of Delhi, in a statement.

The team closely examined the eggs, which clocked in at roughly six inches in diameter, and identified six different egg-species, called oospecies. The variation suggests that there was a higher diversity of titanosaur species than is currently represented by the fossilized skeletal remains found in this region.

The team also believes that titanosaurs buried their eggs in shallow pits similar to present-day crocodiles based on the layout of the nests. They even found a rare case of an ovum-in-ovo (or egg-in-egg), which indicates that titanosaur sauropods had reproductive physiology that is similar in modern birds and crocodiles and possibly laid their eggs sequentially.

Since many nests were found in the same area, the dinosaurs may have exhibited the colonial nesting behavior seen in present day birds like great egrets, brown pelicans, and cormorants. However, the close spacing of the nests didn’t leave a lot of room for adult dinosaurs, which supports the idea that adult titanosaurs left their newborns to fend for themselves, unlike modern birds who sit on their eggs to incubate them.

Historically, the details of dinosaur reproductive habits have been a bit difficult to determine. Fossil nests can help and the ones from this study offer insight into how some of the largest dinosaurs in history reproduced, evolved, and lived just before going extinct.