The mighty shark ancestor could have launched its body to the sea's surface to take a bite out of a whale. 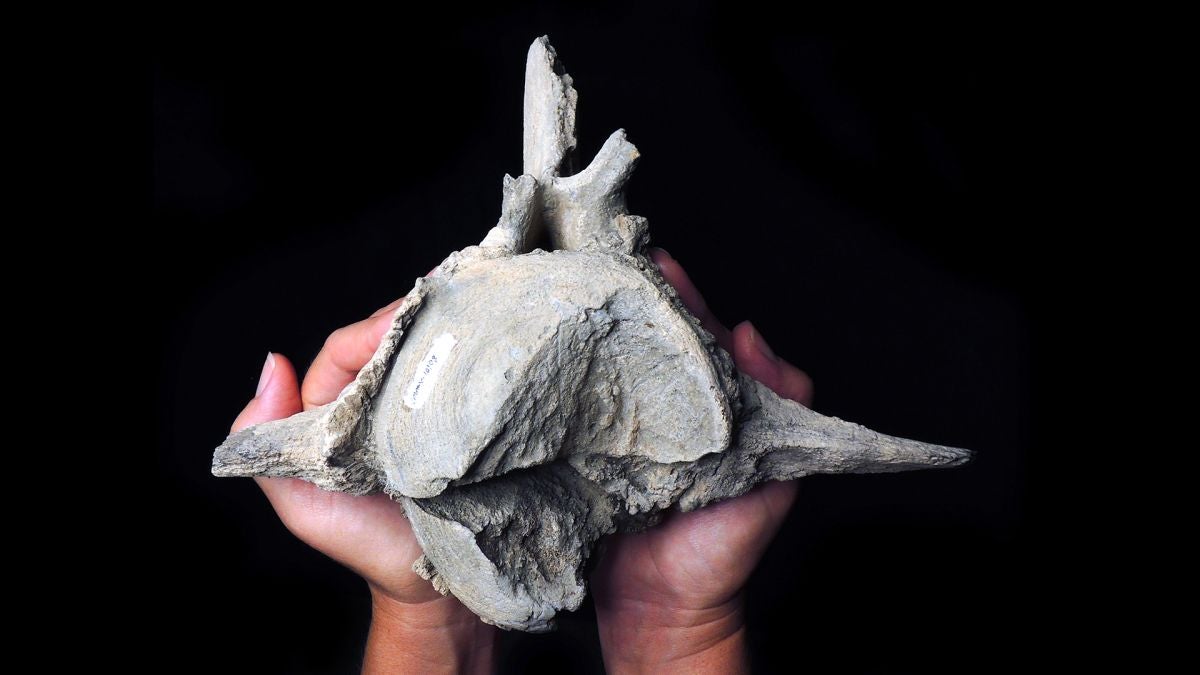 The vertebrae of the ancient whale showed signs of a serious attack. The Calvert Marine Museum
SHARE

About 15 million years before the blockbuster hit “Jaws” snapped up the attention of generations of movie goers, the mightly megalodon (Otodus megalodon) stalked the Earth’s oceans. The ancestor of modern-day sharks could eat prey the size of an orca whale in only about five bites. The largest specimens reached between 58 and 72 feet long and had teeth that are almost three times the size of a modern-day great white.

Now, a team of researchers in southern Maryland have unearthed fossil evidence of a possible bottoms-up megalodon attack on a whale. The fossils were found close together in southern Maryland’s Calvert Cliffs, by Mike Ellwood, a Calvert Marine Museum volunteer and fossil collector. They date back to the Miocene Epoch (about 23 million to 5.3 million years ago), when Maryland was covered in a warm and shallow coastal sea with big plumes of sea algae and succulent aquatic plants that supported turtles, crustaceans, and marine mammals.

In an interview with Live Science, Stephen J. Godfrey, a curator of paleontology at the Calvert Marine Museum in Solomons, Maryland and lead author of the study said “in terms of the fossils we’ve seen on Calvert Cliffs, this kind of injury is exceedingly rare. The injury was so nasty, so clearly the result of serious trauma, that I wanted to know the backstory.”

The study, published last month in the journal Palaeontologia Electronica, details their examination of two fossils from the whale’s fractured vertebrae and one megalodon tooth. They used CT scans and other medical imaging techniques at a local hospital to get a closer look inside the ancient remains.

One of the vertebrae shows evidence of a compression fracture. The study proposes that the whale’s backbone must have been forcefully bent into such a tight curve, that pressure from the vertebra right next to it smashed into one another to sustain this kind of injury.

Another possible cause of this kind of injury to the backbone could be that the whale ingested a toxic algae that caused it convulse so violently that it broke its own back. The authors, however, argue that a megalodon attack is the most likely cause due to the magnitude of the injury to the spinal column bones.

The team also examined a megalodon tooth that was uncovered alongside vertebrae fossil. The tip of the tooth broke off, which could occur after it struck something hard like a bone. It also could have fallen out while swimming or feeding on an already dead or injured whale’s remains. But the team isn’t ruling out the possibility that a megalodon lost its tooth while ramming its jaws into a whale.

The teeth of extinct sharks are a common discovery in Calvert County Maryland and they come from a wide variety of shark species, according to the Maryland Geological Survey. Citizen scientists and paleontologists alike have uncovered teeth from Galeocerdo contortus and Galeocerdo triqueter (similar to modern day tiger sharks), Sphyrma prisca (a relative of the hammer head shark), and Odontaspis elegans (the Sand Shark). It’s thought that this area was a whale and dolphin calving ground, which potentially made the smaller whales easier targets for hungry megalodons.