Hellbender salamanders may look scary, but the real fright is extinction

These giant amphibians have more to fear from us than we do them. 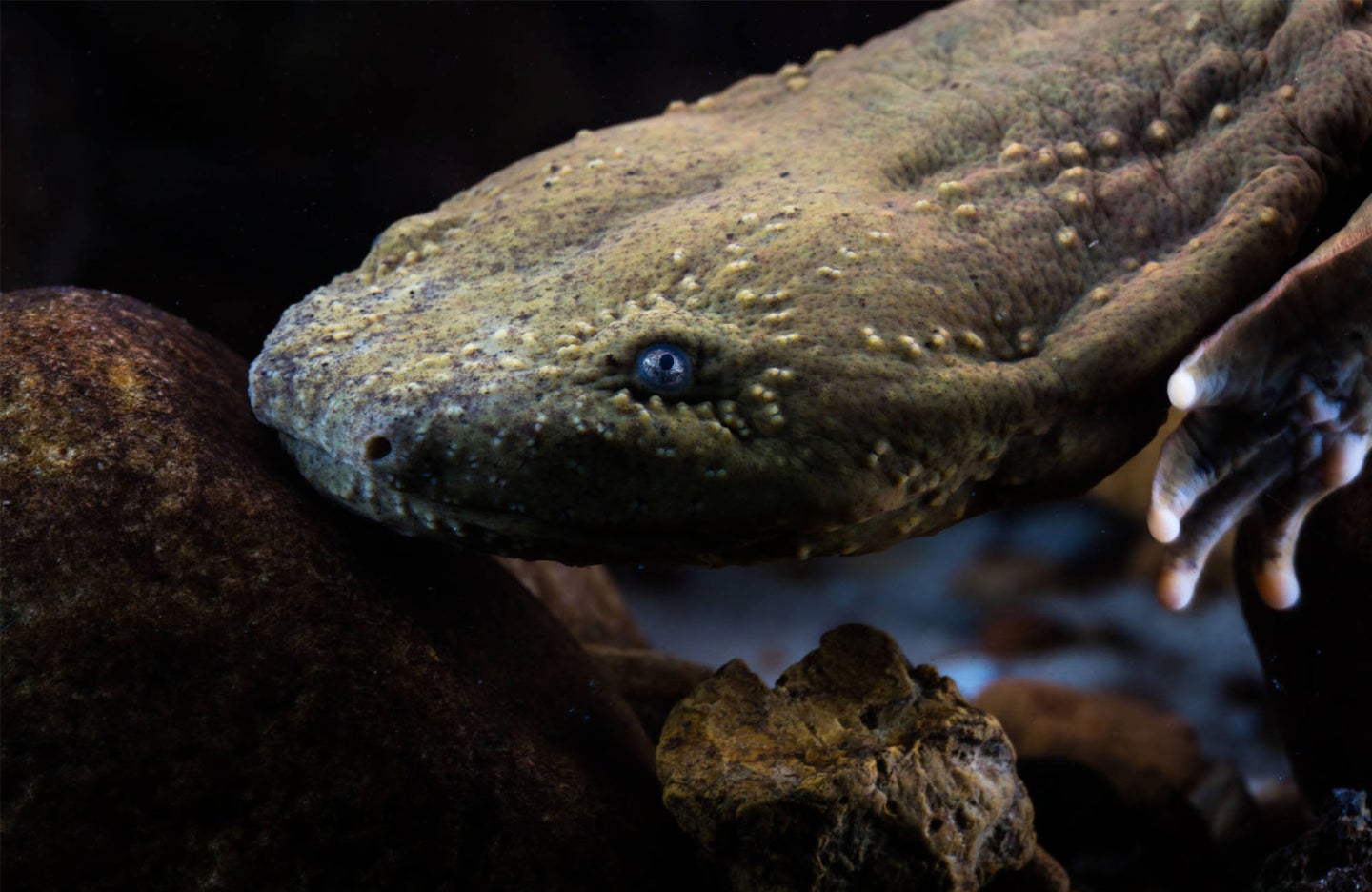 “It has a face only your mother could love,” says Eric Chapman, director of aquatic science at Western Pennsylvania Conservancy. But the mother of all mothers, Mother Nature, does, in fact, love the hellbender.

Although this creature might look like the spawn of satan, it is actually quite docile towards humans unless provoked. Plus, the aquatic animal does wonders for its environment as its presence signals water quality and mitigates crayfish populations from running amok. “They’re the canary in the coal mine for streams,” Chapman says, explaining that the rise or fall of Cryptobranchus populations is often an indication of the health of the overall environment.

But not everyone appreciates the hellbender like Mother Nature does. According to Chapman, misinformation leading to the persecution of these slippery salamanders has been around for centuries. The nasty names originally spread by European colonizers only scratch the surface of what hellbenders have been through in the public eye. They’ve been said to bring bad luck when encountered, while other folklore paints hellbenders as poisonous beasts that decimate populations of large native fish, neither of which is true.

In reality, hellbenders are gentle giants, says Jeff Briggler, state herpetologist for Missouri. Although they may occasionally try to defend themselves when their homes or babies are encroached upon, they are generally harmless—unless you’re a crayfish or a snail. Hellbenders are typically around one to two feet in length, and “the bigger they are, the more gentle they seem to be,” Briggler says.

Hellbenders spend a lot of time just hiding at home, which for them are under massive rocks in streams that can be as big as the hood of a car, Chapman says. Some hellbenders have been spotted under the same rock year after year, living out the majority of their impressively long lives (25 to 35 years in the wild) all under one rock. And hellbenders themselves are an ancient species. “They’ve been around in the fossil record for millions of years,” Briggler says. “Little has changed over time.”

On the occasions when hellbenders do have to leave their rocky abodes, these big homebodies are rarely seen swimming and instead usually plod along river bottoms with their stubby legs.  The amphibians are typically most active in the fall during mating season. Males come out to do a courtship display and mate with females who will go back under the rocks to lay their eggs. Male hellbenders also guard the nests for weeks without eating, Chapman says. Despite their sacrifice, they might not win the award for best dad of the animal kingdom award, given their tendency to eat their young if the babies don’t flee the nest early enough.

But far scarier than their names or their debatably ugly mugs are real threats to hellbenders, such as habitat loss and disease. Ozark hellbenders, one of two hellbender subspecies, have faced significant declines in Missouri and Arkansas “In the ‘70s, we estimated there were around 45,000 hellbenders in Missouri. Today we estimate there are about 2,100,” Briggler says. Eastern hellbenders, the other subspecies which live as far north as New York and as far south as Georgia and Alabama, may be seeing population declines, but scientists don’t have as much information about these numbers as they do in Missouri, Briggler says. Still, the eastern hellbender is listed as threatened or endangered in several states, although it has not made it onto the federal endangered species list like the Ozark subspecies.

But even though they reside across 15 states, habitat destruction is suffocating these amphibians. Although they are born with gills and use lungs later in life, hellbenders primarily breathe through their blood-vessel-lined skin. They absorb oxygen through cold water and may occasionally use their lungs to get oxygen from the surface if their streams become too warm, Briggler says. But, as deforestation displaces soil and agriculture erodes land, increased sedimentation can occur in streams, literally choking out hellbenders. Additionally, the spread of amphibian chytrid fungus has been affecting Missouri hellbenders since the 1960s and causing death along the way, Briggler says.

Illegal animal trade has impacted hellbender populations, too. Although learning about these animals is a great way to save them, increased recognition has had adverse effects, Chapman says. When the eastern hellbender was named the Pennsylvania state amphibian in 2019, “it was amazing,” he says. “But it also spurred up tons of calls to the Pennsylvania fish and boat commission from people wanting to have one in a tank at their house.” This is nothing new. A few decades ago, hundreds and thousands of hellbenders were illegally collected from Missouri waters, mostly for sale as pets in southeast Asian countries, Briggler says. If individuals go looking under rocks for these giants in the wild, Briggler warns that the animals may never return.

Now, protections like CITES have helped curtail this trend, although scientists still urge people not to go looking for hellbenders in the wild, as moving their rocks should only be done by highly trained individuals who know how best to preserve the microhabitat underneath. With the help of breeding programs, scientists have been able to release 10,000 hellbenders back into rivers in Missouri. It will likely take decades to bring back hellbender numbers back to where they were before the 1960s, but states like Missouri are starting to see a small resurgence, says Briggler.

“Fifteen years ago, I would have said, ‘I don’t know if we can save this animal,’” he says. “I’m so much more hopeful with the program we have here today. We are buying this animal 30, 40 years while we work on addressing threats.”