The elements that make a perfect playground

Some of the most important elements may surprise you. 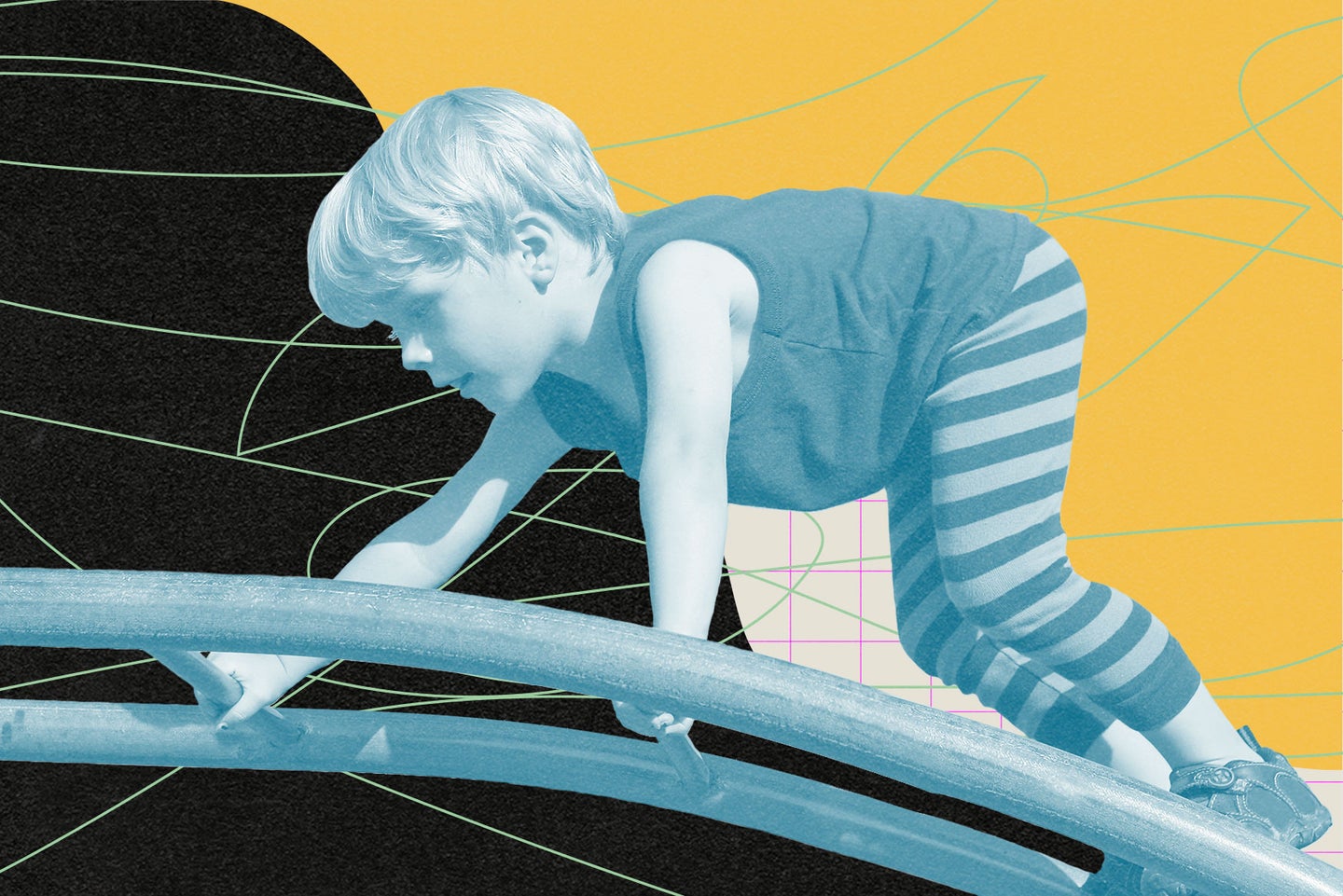 Playgrounds are important sites for childhood development, but not all of them are created equally. Christin_Lola / Deposit Photos
SHARE

There are a few ways Meghan Talarowski, a landscape architect and playground researcher in Philadelphia, knows she’s found a good playground. One is when she sees adults and teenagers sharing and engaging with the space alongside kids. At St. James park in London, England, which she routinely visited in her research of playground dynamics, Talarowksi would watch the same elderly woman detour through the playground every morning on her way to and fro, hopping from boulder to boulder on the rock border around the sand pit. At another London playground in Victoria Park, she’d watch parents and even grandparents climb the same miniature concrete mountain as young children, gleefully sliding down the built-in metal chutes. “Watching the joy on all of their faces and knowing that they were getting that through the playground was just really phenomenal,” she says.

[Related: Animals play in all sorts of ways]

Play is the mode we begin to learn and relate to the world through, says Nilda Cosco, a professor of landscape architecture at North Carolina State University in Raleigh who studies how outdoor environments impact children’s health. “Play is the richest activity in all ages,” she says. “Play is learning.” And, although it can happen anywhere, indoors and out, outdoor spaces and playgrounds are central for much of children’s frolicking.

When adults reflect back on their most treasured play memories from childhood, most remember being outside, says Mariana Brussoni, a developmental child psychologist who researches outdoor play at the University of British Columbia in Vancouver. “Most people, they talk about a sense of freedom and joy and being able to move their bodies in ways that they can’t when they’re indoors.” She adds that play is important for cognitive development, resilience, boundary testing, creativity, and building confidence, as well as physical development.

Improving motor skills, resolving conflict, social development, and even learning the physics of our world can all happen on the playground, says Brussoni. But many of these spaces don’t actually provide a good environment for facilitating meaningful play. For the ultimate playground experience, science tells us to consider these six critical components.

[Related: The best playground is one built by kids]

Start with the basics

The first thing any good playground needs probably isn’t what you think, says Talarowski. It’s not a slide, or a swingset; it’s a bathroom. “You spend all this time getting your kids to the playground, and then the first thing they say when they get there is, ‘I have to go to the bathroom’,’’ she says. And far too few playgrounds in the US even meet this elementary threshold.

The most immediate barrier to enjoying a playground is whether or not you can feasibly stay there for a while. And successful playgrounds have everything necessary to ensure children and their caregivers can spend time at them. By Maslow’s hierarchy, physiological needs like bathroom access, water, and food have to be met before learning and fun can happen.

Shade, a place to change diapers, seating for parents and kids, and nearby snack options are all also essential to making sure play is given the time it deserves.

A huge part of play is letting creativity run wild. For a playground to facilitate that, it needs to be more than a single immovable structure that kids see day in and day out, says Karen Martin, a public health researcher at the University of Western Australia in Perth.

Martin jokingly calls large playground structures “plastic fanatics,” and says that although they can provide some value to kids, playgrounds also need parts that can change and be manipulated.  “Things like sticks and sand and water rather than those sterile and stagnant parks where you go down the slide and you climb up a plastic play frame,” she says.

Brussoni agrees: “your typical school playground, it might be interesting for the first one or 10, or 15, or maybe even 100 times that the kids go out and play in it. But most kids are at the same school for seven or eight years. It’s going to get really, really boring really, really quickly.”

“What we generally say is that environments that are rich in loose parts are generally rich environments for kids to play in,” she explains. Rocks, mud, crates, and tarps are all on the list of things that can make for great play opportunities. A simple twig can become a sword, wand, feather pen, or construction element in a child’s hands—all it takes is imagination, which kids have in abundance.

Sand boxes are a prime, classic example of customizable play, but water nearby is important for maximizing their benefit. Swing sets, too, allow for kids to have more “affordances”, or ways to change how and at what level they play, says Brussoni. A child can choose how high they swing, how they position themselves on the seat, and even do the activity in groups or pairs. That is, assuming they’re not overpoliced by the adults on the playground.

The pinnacle of creative and customizable play is something like The Yard on NYC’s Governor’s island or Glamis Adventure Playground in London, say Talarowski and Brussoni. In these areas, kids are allowed to not just engage with the equipment present, but also build their own new equipment out of raw materials, mastering construction and cooperation skills while being guided by play workers, professional staff who facilitate safe play without setting strict limits.

Though it might have negative connotations for many adults, the word “junkyard” came up more than once in the experts’ descriptions of the ideal playground. At adventure playgrounds, which may look like piles of garbage from one perspective, “there’s amazing, elaborate structures that have been built, and zip lines and slides and all of that,” describes Brussoni. But, she says, “they’re constantly being deconstructed and reconstructed.” In the end, the kids have the ultimate say in what their space looks like and the power to change it constantly.

[Related: Is play unique to mammals?]

All the experts we spoke with agreed that the chance for kids to take appropriate risks and challenge themselves is absolutely central to productive play.

Small scrapes, bruises, and even broken bones are an almost inevitable part of growing up, and Brussoni says focusing on preventing treatable minor injuries can get in the way of “the big picture of what kids need.”

“What’s important with play space designs is to provide a gradation of risk so you could have two year olds as well as 16-year olds finding interesting things to do in those spaces,” says Brussoni.

Without any risk or challenge, kids lose interest and become easily bored, she adds, citing the many research interviews she’s conducted with kids. “What comes up again and again is how boring playgrounds are—how they’re for babies, how, when they’re on the monkey bars, their feet touch the ground. There’s not enough challenge.”

When it comes to bringing challenge into playground design, Talarowski says she likes to aim high. Vertigo-inducing climbing structures and fast slides can provide an element of excitement to playgrounds, enticing kids into more physical activity and testing their own limits. But she’s sure to mention that all of these very tall structures should be enclosed or have railings so that perceived risk doesn’t become real danger.

Brussoni also promotes climbing and heights in play spaces, especially the natural climbing opportunities offered by a good tree. And, although the prospect of falls from trees and play equipment is often scary to parents, the injury statistics don’t support those fears. In Canada, where Brussoni lives, no child deaths have been reported from tree falls in the past 19 years of data collection, she says, while “the leading cause of deaths for kids is car crashes as a passenger in a motor vehicle.”

Trees provide more than just a good climb, they’re also indicative of how much nature access a play space provides. Incorporating nature into playgrounds brings a huge benefit to children. “The outdoors is an ever-changing environment, it’s always stimulating,” says Cosco. Some studies suggest that contact with green spaces can boost the immune system and reduce childhood stress.

In her own work, Martin has found that “children really enjoyed and liked natural play areas.” These areas inherently provide more loose materials and chances for creative play. At a natural play area in Kings Park in Perth, which has a small flowing stream feature, she recounts “there was a lot of social interaction between children, there was creative play. They were building little dams, and they were building huts and cubbies.”

Physical activity and social interaction are critical for kids, but so is having places to retreat. Areas for quiet contemplation and alone zones are particularly beneficial for the roughly one in three children that research suggests have experienced high levels of adversity or trauma, says Martin.

Trauma impacts the brain, and can make it harder to process difficult feelings, she explains. So, having areas for children who need space to retreat and spend some solo time can be key for fostering healthy coping skills. Even for children who haven’t experienced trauma, lots of tough situations can emerge on the playground, and ensuring there are areas to take a breath away from other kids may help to diffuse tensions.

And as a bonus, secluded areas can make for great games of hide and seek, which Talarowski lists as one of the most popular forms of risky play.

[Related: Childhood trauma can change the way your genes behave]

What does the most ideal playground look like? According to Cosco, that entirely depends on the children and community involved. “We ask the children, we ask the teachers, we ask the parents because this is their space. They know what they want.”

Cosco stresses that playgrounds should be designed with the cultural needs of communities in mind, and should cater to the whole community, not just the majority. For kids who are othered and excluded from many settings due to differences in ability, language, or ethnic background “being outdoors and playing together with other children, it’s an oasis,” she says. And bringing culture into play spaces can boost that benefit. For example, planting culturally relevant trees or designing spaces for culturally specific games and music can boost community engagement and help kids feel included.
Martin adds that considering a diversity of physical abilities is critical. Playgrounds should be highly accessible, allowing children to be involved regardless of any disabilities.

And diversity doesn’t just apply to playground users, but to the playscapes themselves. The best playgrounds offer a variety of options, according to each of the experts we asked. Things to climb, chances for speed, places to relax, greenery to enjoy, opportunities to create—and, of course, a bathroom. Put it all together, and you’ve got one awesome playground.