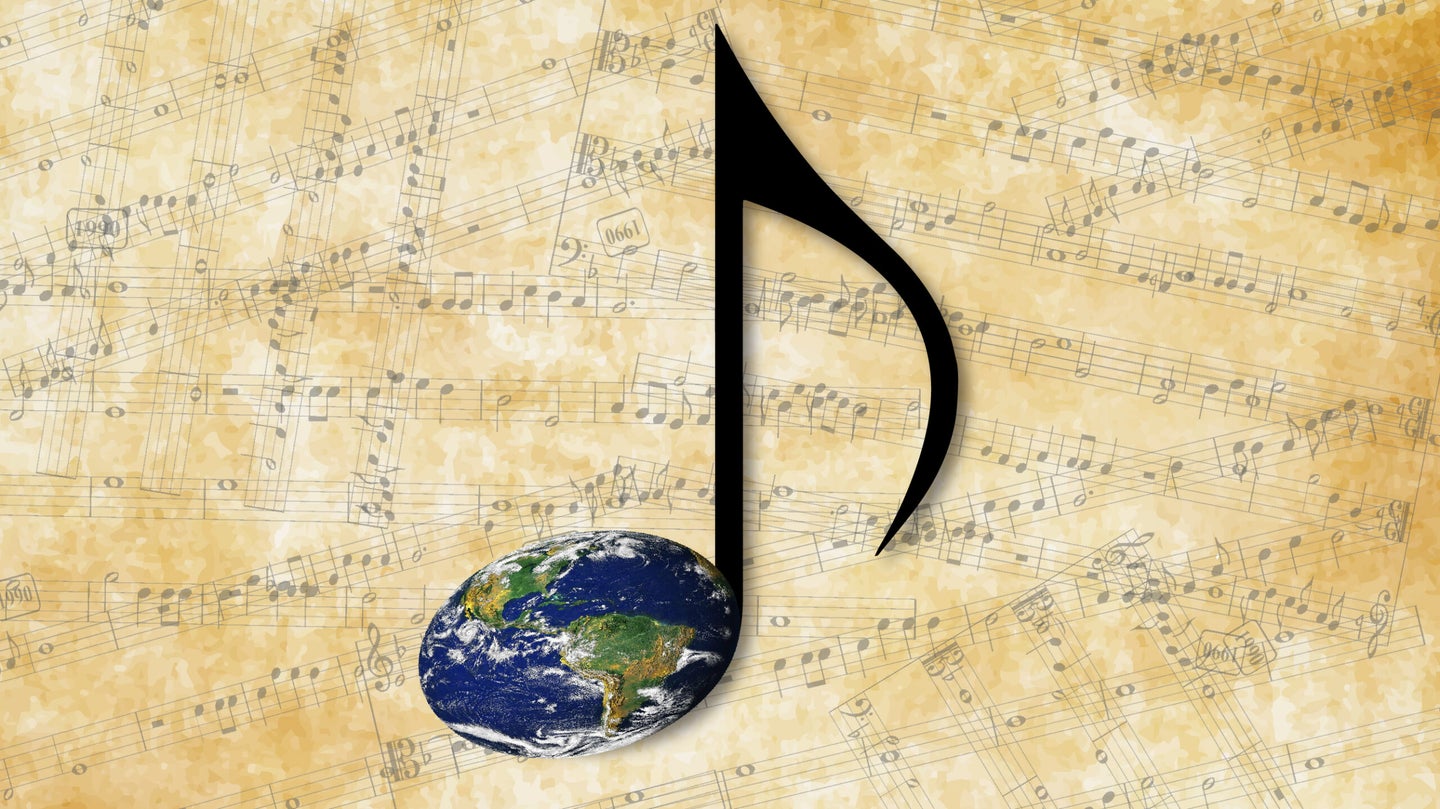 Lucy Jones thinks we’re not hearing the message about climate change well enough—so she set it to music. And while the planet’s warming, the song she composed is downright bone-chilling.

The seismologist, whose work focuses on preparing communities for environmental change, is also a classically-trained musician (many scientists, it turns out, are musically inclined). Jones says she sees music as a means for expressing emotion when her day job deals mostly with hard facts and figures—but sometimes, the two can intersect. When it came to climate change, she could imagine hearing the data on global temperature as it intensified and accelerated over the past century and a half.

A song began to form in her head, and she spent several years crafting a score in the form of a baroque In Nomine piece, a complex web of bite-sized motifs and their iterations centered around a fixed line of notes called the cantus firmus. Jones based this line on the temperature data (each measure is one year, and each half step in the music equates to a change of 0.03˚C during that year), surrounding it with a network of interlocking harmonies and themes that tell the story of how humans are cooking the planet. And while the pitch of the piece ascends with the temperature, it’s not an uplifting tune.

“I think it’s a little somber, which it should be,” Jones says. Because the In Nomine form is essentially an orderly cacophony of musical statements, the data-based cantus firmus can easily get lost in the mix. So Jones composed the harmonies and motifs encompassing it to become increasingly abrasive and frantic, reflecting the uncertainty and destruction climate change is already causing.

The tone starts out restful and mellow between 1880 and the 1930s. For the first few decades of this period, Earth’s temperature actually decreased slightly due to volcanic eruptions that partially shielded the planet from solar radiation. For the next 50 years, the music increases energy and intensity as greenhouse gases permeate the atmosphere and temperature rises again. Jones says the final part of the piece is frantic, imperiled, “accelerating toward who knows where.”

Jones recalls hearing someone describe this type of music—referred to as polyphony for its apparent lack of a distinct melody and harmony—as a dinner conversation. The piece starts with a short musical idea, which different instruments pick up and modify, sending it back and forth and building on it—sometimes to a chaotic degree.

“This is sort of a dinner conversation about the climate,” Jones says. She named it In Nomine Terra Calens (In the Name of a Warming Earth).

For those not so musically inclined, Jones collaborated with Ming Tai at the Art Center College of Design to produce an aesthetically pleasing visualization of the song:

The piece is played by a string quartet of viola da gambas (relatives of the violin), recorded in part by Josh Lee, Jones’s musical mentor. Jones had been playing the baroque instrument for over 40 years, so she felt most comfortable composing a piece that it could play. As it turned out, translating the climate data into musical notes formed a range identical to the viola da gamba’s—the instrument plays both the lowest and highest note it can possibly play. The ending section proved especially difficult, because the highest note literally went off the end of the instrument’s fingerboard.

Jones says when she gave Lee the score to play, he saw the challenging high notes and said, “Oh my god, we’re so screwed.” That told her she got the emotion right: Without drastic action to adapt to and mitigate climate change, the planet’s screwed too. There’s physically no more room on the fretboard for Jones to add another year of higher temperatures to the composition—the symbolic urgency couldn’t get any more intense.

“I want people to feel the emotion that something fundamental has changed and it’s not natural,” Jones says. She hopes this creepy composition will stay with listeners, reminding them how existential of a threat the climate crisis is to humanity. But the intention isn’t to resolve people to the gloom and doom of global warming—it’s to encourage them to take action. So Jones ends the piece with a musical question mark. The sustained, haunting F-sharp gives humanity a choice: Keep our heads in the sand and let this crisis win, or come up with solutions that make the planet better for everyone. There’s still time to write a better ending to this song.