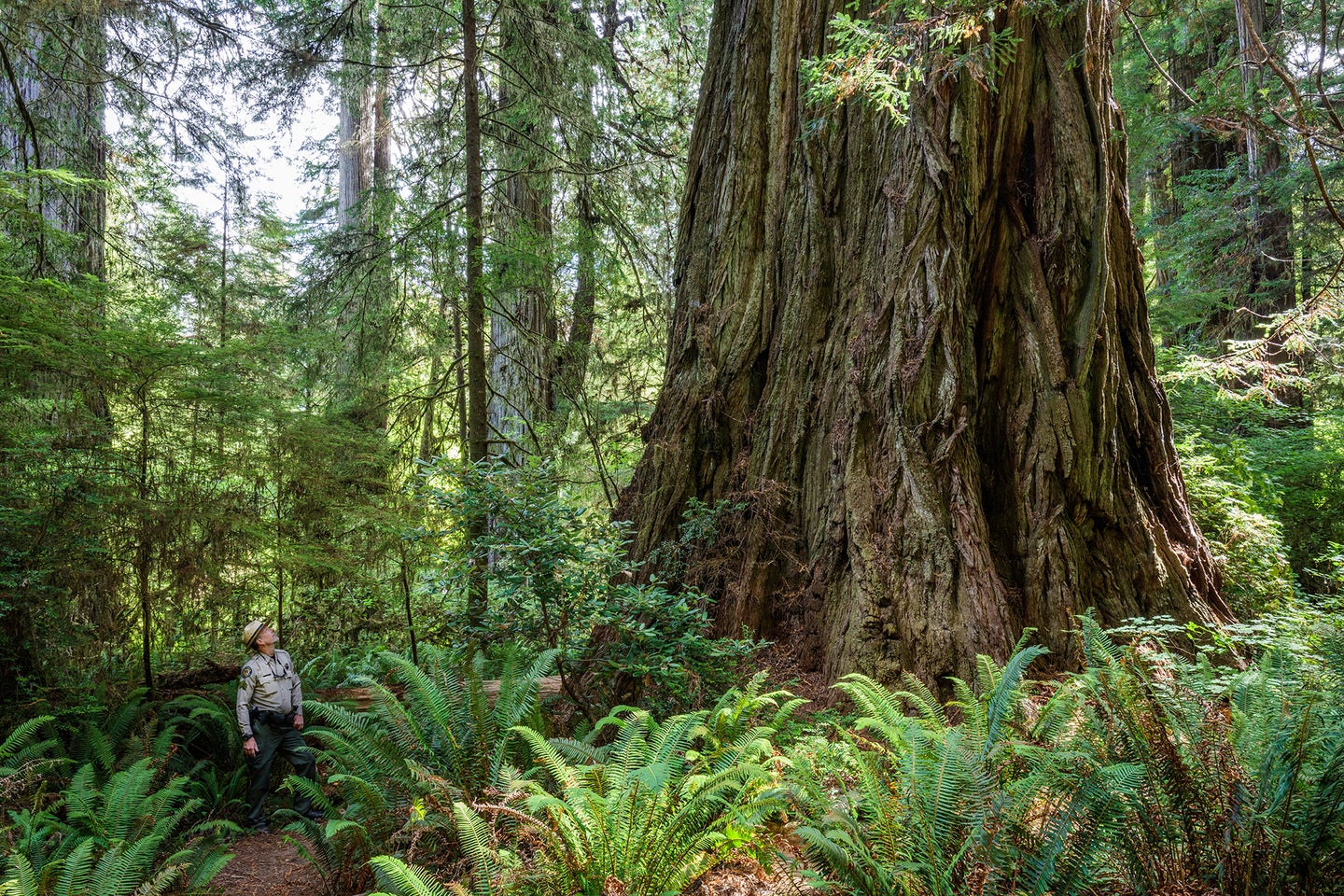 Today, you can send a tube of spit to a lab to learn about your ancestry and the health risks you’re predisposed to. Soon, scientists hope to create a similar tool for giant sequoias and coast redwoods—a 23andMe for trees.

“That’s my dream,” says David Neale, plant scientist at the University of California, Davis. Now, he and a team of scientists from UC Davis, Johns Hopkins University, and Save the Redwoods League have completed the first major step to accomplishing this dream: sequencing the entire genomes of the two trees. “Getting a reference genome sequence for an organism for the first time is that necessary step to enable discoveries,” says Neale.

The two species call the West Coast home. The coast redwoods range from Southern Oregon to Central California, hugging the coastline for its mild temperatures and moist, foggy air. They’re the tallest organisms on the planet; in 50 years, they can grow up to 150 feet, and many later top 300. The tallest coast redwood, named Hyperion, stands more than 379 feet tall somewhere deep in Redwood National Park in Northern California, its location kept secret.

Giant sequoias aren’t quite as tall, but they are the largest living things by volume. The hulking trees dot the western slopes of the Sierra Nevada. The largest sequoia is named the General Sherman Tree and boasts a 36.5-foot diameter at its base and is 52,508 cubic feet in volume.

As impressive as they are, these trees are vulnerable to the effects of our forest management and a warmer, drier, more-fiery future. Giant sequoias normally welcome a regular, small fire to clear underbrush and add nutrients to the soil. But as fires have grown bigger and hotter, they’re threatening to cook even these massive trees. Coast redwoods may also lose some of their precious fog, which they are able to tap into for water during the region’s dry summers, as temperatures go up.

On top of these individual threats, some of the trees’ natural resilience might have already been chopped away. 95 percent of old growth coast redwoods have been logged, along with a third of giant sequoias. Scientists worry that this loss of genetic diversity also means the loss of genes that may have encoded traits to make the trees more drought or heat tolerant. “We really don’t understand how much the forest was affected from a genomic perspective from all of those decades of forest management,” says Emily Burns, director of science for Save the Redwoods League.

These concerns are fueling the Redwood Genome Project, which launched in 2017. To determine the genomes, scientists first took samples from an individual tree from each of the species and isolated their DNA. Then, they used computer algorithms to arrange the messy DNA into a clean, organized sequence of base pairs. This second step was challenging because of the size and complexity of the trees’ genetic information, says Neale. “This genome was much more difficult than probably any genome that had ever been sequenced.”

Scientists aren’t really sure why these trees’ genomes are so big. Neale says they have roughly the same amount of genes that code for proteins as us. “It may very well be related to their long life cycles,” he adds. “The two trees that were sequenced were in excess of 2,000 years old.”

By the end of the five-year project, the scientists want for it to be possible for a forest manager to send leaf samples to the lab and get a report back on the health of the trees and their vulnerability to things like drought and warmer temperatures. The information can be used to protect genetically diverse and resilient stands of trees. It can also improve restoration, by telling scientists which trees have the best odds of surviving in a given area.

And the genetic test can also help inform fire management efforts. After many decades of us actively putting out forest fires, California’s forests are much more dense with trees than they were historically. Now, efforts are underway to cut down some of these extra trees, to free up water and sunlight so others grow bigger and healthier. Testing tree genomes could help managers decide which trees to preserve in such thinning efforts. “We don’t want to be reducing the genomic diversity at the same time,” says Burns.

Now that they have a base genome identified, the scientists are sequencing 100 more trees from each species this year in an effort to correlate which genes are associated with which traits. Next year, says Burns, the team will work with officials from California State Parks and the National Parks Service to start collecting and analyzing leaf samples.

Beyond improving forest resiliency, Burns thinks the information will reveal all sorts of arboreal secrets. “I have a feeling we’re going to be learning for many years to come all kinds of interesting things about the redwood genome,” says Burns. “I hope we learn secrets as to why these trees are so tall and so big—they really are trees that spark all of all of our imaginations.”