The Canaanite comb is inscribed with a warning for tiny lice—the oldest written sentence discovered in the language. 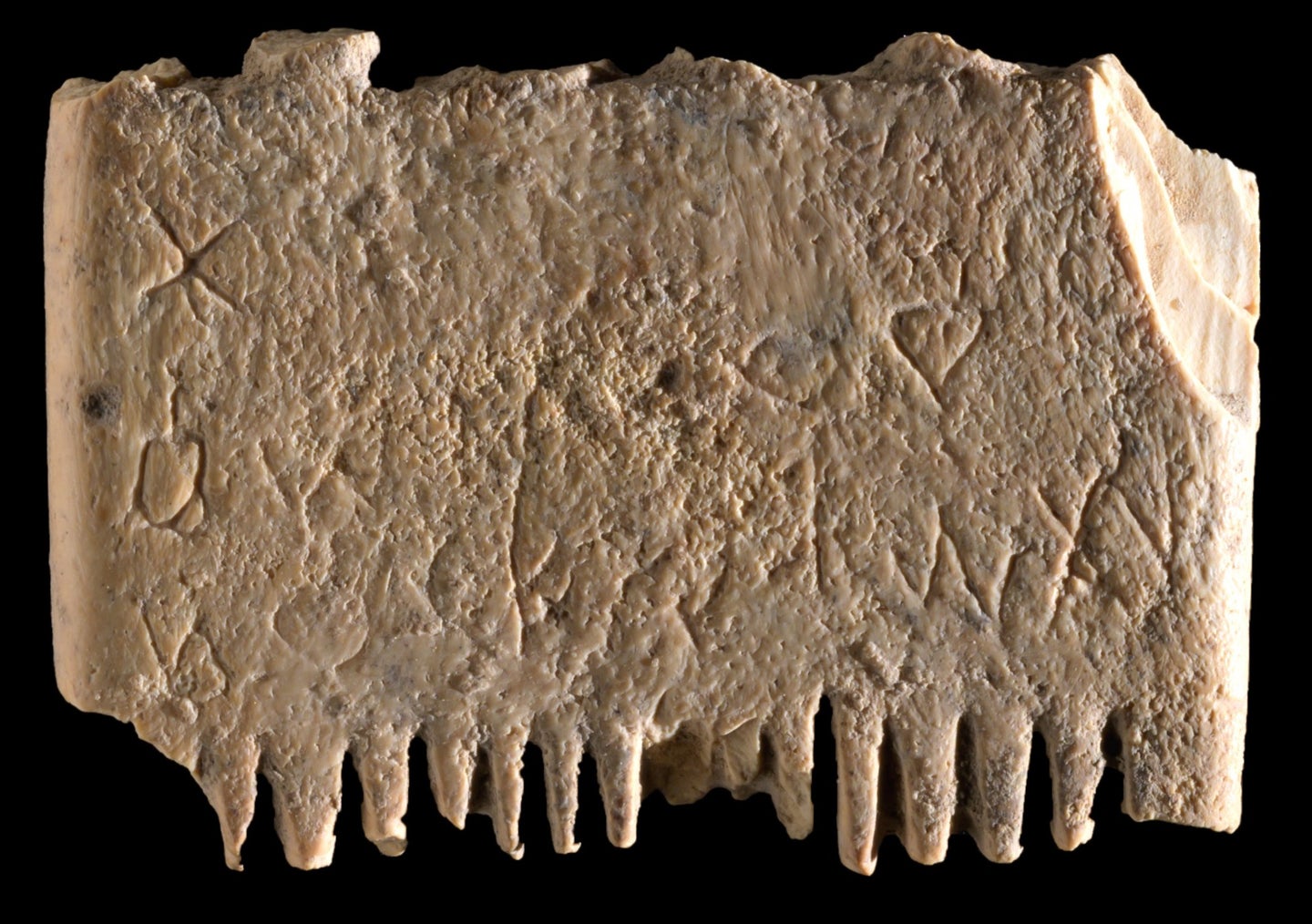 An ivory comb dating back to about 1700 BCE containing a written spell against lice. Dafna Gazit, Israel Antiquities Authority
SHARE

Centuries before skin care influencers were selling advice like silk pillowcases for hair loss and wrinkles, sheet masks for an all-natural dewey glow, and using mayonnaise as a hair mask, there was a comb with a spell to treat one of human kind’s oldest pests: lice.

A small ivory comb dating to about 1700 BCE was found with engraved with a hopeful spell against the wingless insect that like to infest human hair. The inscription reads, “May this [ivory] tusk root out the lice of the hair and the beard,” according to a study published last month in Jerusalem Journal of Archaeology. The 17 letters on the comb form seven words and belong to an early form of the alphabet used by the Canaanites.

The Canaanites lived in a region that includes parts of present-day Israel, Palestine, Lebanon, Syria, and Jordan called Canaan. The region is mentioned throughout the Hebrew bible and historical texts dating as far back as 3600 BCE. The comb was uncovered at Tel Lachish, the remains of a major Canaanite city-state from the second millennium BCE. From 1800 to 1150 BCE, Lachish was the major center for the use and preservation of the Canaanite alphabet. To date, 10 Canaanite inscriptions have been found at Tel Lachish, but never one containing a full phrase—until now.

“This is the first sentence ever found in the Canaanite language in Israel. There are Canaanites in Ugarit in Syria, but they write in a different script, not the alphabet that is used till today, ” Yosef Garfinkel, an archaeologist at the Institute of Archaeology at The Hebrew University of Jerusalem and a co-author of the study, said in a statement. “The Canaanite cities are mentioned in Egyptian documents, the Amarna letters that were written in Akkadian, and in the Hebrew Bible. The comb inscription is direct evidence for the use of the alphabet in daily activities some 3,700 years ago. This is a landmark in the history of the human ability to write.”

The comb is about one inch long by 0.9 inches wide and has teeth on both sides that were likely used to remove lice and their eggs from hair, similar to the two-sided lice combs still used today. Combs during this area were made from bone, wood, or luxurious ivory. Ivory was the more expensive material that was likely imported. The authors theorize that the comb likely came from Egypt, since there weren’t any elephants present in Canaan during this time period. Importing such a swanky bug-picker shows that even wealthy and powerful people weren’t immune from the annoyance of lice.

Tiny remains of some of the actual head lice (about 0.02 inches) were found on the combs second tooth of the comb. The weather and climate of Lachish didn’t allow for a whole louse to be preserved on the comb, but the outer chitin membrane of a bug in the nymph stage survived.

According to the study, many of the comb’s special features (despite its tiny size) are helping researchers fill in knowledge gaps about the culture of Canaan in the Bronze Age, which lasted from 3000 to 1000 BCE. It shows an entire verbal sentence written in the dialect spoken by the Canaanite inhabitants of Lachish for the first time, so scientists can compare it with other written languages of the Bronze Age. The inscription also sheds lights on some of the more mundane, but poorly understood aspects of daily life at the time, like haircare and dealing with itchy lice.

It also marks the first discovery in the region of an inscription that refers to the purpose of the object it was written on and shows off the skillful carving of the unknown engraver. They were able to successfully carve tiny letters less than an inch wide, which can help in future studies on literacy and carving in Bronze Age Canaan.