Researchers have found that biofilms can create concentric patterns using a mechanism thought to only be used by plants and animals. 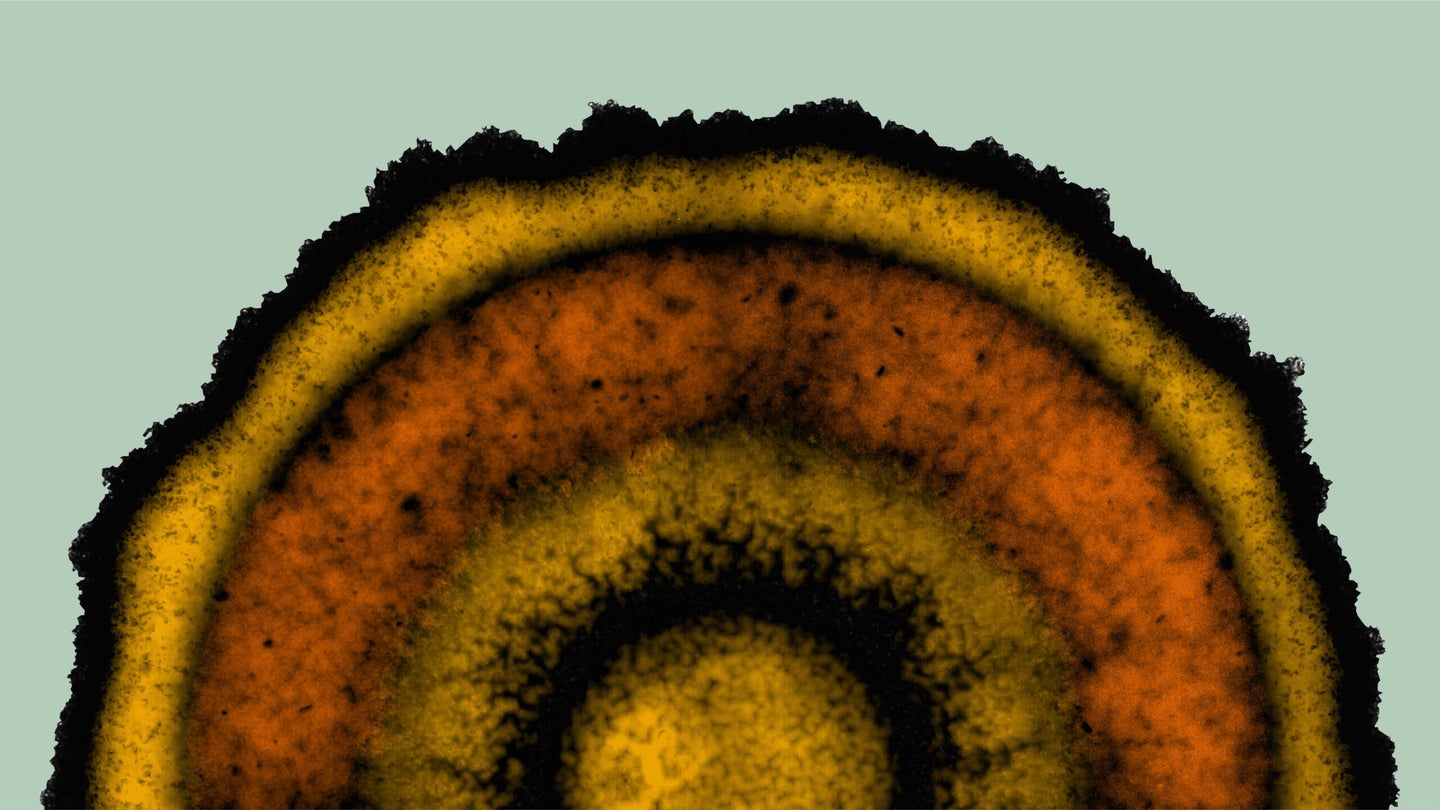 On initial glance, the halo of amber and gold seen before you might look like the rings of a tree trunk. But these radiating bands were arranged by unexpected, tiny creators: bacteria.

Last week, researchers from the University of California San Diego, Stanford University, and Universitat Pompeu Fabra published a paper in Cell that suggests communities of bacteria, known as biofilms, are much more intricate than previously thought. The researchers found that biofilms can organize themselves into a dart-board-esque pattern due to a mechanism researchers thought only existed in plants and animals.

Even if you’ve never heard of biofilm, you’ve definitely encountered it. Some common types are pond scum and even dental plaque, and biofilm can even preserve shipwrecks by coating the metal exterior and preventing corrosion. The ring-like pattern highlighted in the new research is a result of the biofilm’s nitrogen stress response pattern, according to the paper. Nitrogen is required for cell growth, and while nitrogen is readily available to the cells at the edge of the biofilm, it is limited closer to the center.

This lack of nitrogen starves the bacteria and elicits a stress response.The higher metabolic stress in the interior of the biofilms causes the cells to release spores, or baby bacteria, used to survive in tough conditions. Each stage in this cycle of starvation, stress, and sporulation is “frozen” in time and place to form the concentric rings of the biofilm’s different cell types.

[Related: This photo basically confirms that your tongue is a microbe party]

The researchers suggest in the paper that the formation of the rings in this manner follows a “clock and wavefront process.” The “clock,” in this case the nitrogen stress response pattern, creates different stages of cell type organization. The “wavefront” is the delineation between one type of organization and the next. It is a similar mechanism that patterns each segment of the human spine or the roots of a plant.

“We are seeing that biofilms are much more sophisticated than we thought,” said Gürol Süel, a molecular biology professor at the University of California San Diego, in a news release. “Apparently, the ability of cells to segment themselves in space and time did not just emerge with plants and vertebrates, but may go back over a billion years.”

These findings could help researchers better understand the clock and wavefront mechanisms in plants and animals because bacteria are easier to work with in a research setting.

“Having a bacterial system allows us to provide some answers that are difficult to obtain in vertebrate and plant systems,” Süel said in the release. “Bacteria offer more experimentally accessible systems that could provide new insights for the field of development.”