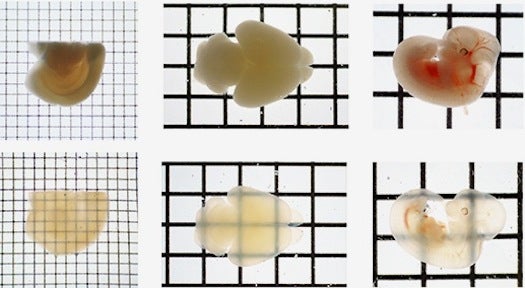 This new technique for making cool-looking clear organs sometimes sounds more like a fancy recipe than a lab procedure. It uses a sugar syrup to strip colors from mouse brains and embryos, so that scientists can study them.

The technique, dubbed See Deep Brain or SeeDB, is one of several that scientists have recently developed for making see-through bodily organs. The lab procedure helps researchers study things like how brain cells interact with each other in an intact brain. Before transparency techniques were developed, scientists usually examined organs by using machines to cut impossibly thin slices of an organ—like deli meat, but on a nanoscale—and then taking pictures of each slice. (And it’s not like imaging slices is going away, either. Such techniques are still popular.)

This latest effort cures preserved brains and tissues in a syrup made of fructose, a type of sugar that’s common in fruit, honey and, well, high-fructose corn syrup. SeeDB’s developers, a team of three biologists from the RIKEN institute in Japan, decided to use fructose in part because its refractive index is similar to that of the fats that envelop and protect brain cells. A material’s refractive index is a measure of how light passes through it, and putting a tissue in something with a similar refractive index reduces the light scattering that makes the tissue appear opaque.

When they put tissues in a syrup with a lot of fructose, however, the biologists found that the tissues underwent a Maillard reaction. Yep, that’s the same reaction that occurs in most cooking and is responsible for delicious flavors and some browning. Just as with seared steaks, the Maillard reaction made the tissues brown (No word on whether it also made mouse brains tastier). So the biologists added another chemical, alpha-thioglycerol, which prevented the Maillard reaction from occurring. The final SeeDB solution is a mixture of water, fructose and alpha-thioglycerol.

To show that SeeDB works, the RIKEN biologists used it to visualize the pathway in mouse brains that’s responsible for processing smells.

The SeeDB technique is easy to perform and uses cheap and safe ingredients, the RIKEN scientists wrote in a paper they published yesterday in the journal Nature Neuroscience. It works well for visualizing delicate brain pathways, they said. And it should work just as well for human brain tissue that’s been donated to science, the lead scientist, Takeshi Imai, said.