Jurassic Park 4’s Dinosaurs Will Not Have Feathers

Which means the movie about cloning legions of dinosaurs from preserved DNA will be unrealistic. 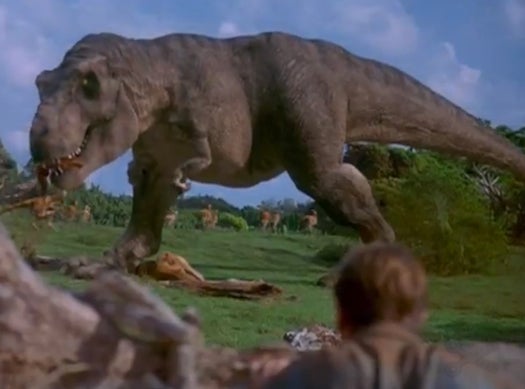 There’s going to be a Jurassic Park 4, and there’s some super-vague details coming out about what it’s like. (Some kind of “scary” dinosaur will make a cameo?) The director is Colin Trevorrow, and last month he sent out this tweet:

We’ve known for a while now that many dinosaurs were feathered, instead of the more reptilian look we’ve been giving them. Which means this movie will be inaccurate. New Scientist has rounded up a couple quotes from scientists who are earnestly upset by this:

Palaeontologist Darren Naish, of the University of Southampton, UK, isn’t impressed with Trevorrow’s choice. “I’m pissed off by a disregard for knowledge,” he says. “It helps perpetuate the notion that dinosaurs were all scaly dragons, alien and unlike modern animals.”

“[The decision] jars with overwhelming evidence that some JP dinosaur stars were feathered, and misses an terrific chance to affirm modern concepts of dinosaur palaeobiology with a wide audience,” blogs palaeontologist and movie consultant Mark Witton.

Yes, fair points. Absolutely. But. The whole conceit of Jurassic Park is impossible. There’s a lot of unrealistic stuff in the movies. Maybe it’s just not the best learning environment?