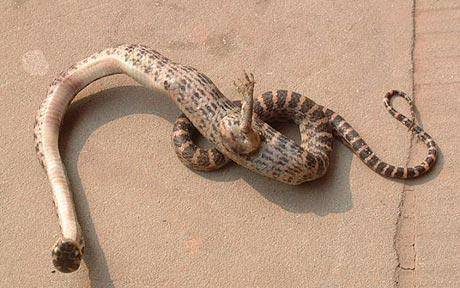 Just because most mutants don’t gain special powers doesn’t make them any less interesting. Case and point, this snake discovered the other day in Southwest China. Looking at the picture, you should be able to figure out what makes this snake different from most. Namely, the weird clawed limb sticking out of its side.

Dean Qiongxiu, the woman who found the snake, claims she discovered it stuck to the wall of her bedroom. Shocked and scared, Qiongxiu proceeded to beat the snake to death with her shoe, before preserving the beast in a jar of alcohol.

Obviously, this being a natural oddity from China with no independent verification, there’s a good chance it’s just a skillfull taxidermy hoax. However, nothing in biology prohibits such a mutation.

Some snakes have the remains of hips, and vestigial remnants of limbs, around their cloaca. Additionally, all snake genomes contain the DNA needed to produce a limb, so the mutation could occur with a little tweak of some Hox genes–those that dictate the body’s structural plan. Pollution has been shown to cause Hox gene mutations in frogs, and considering the level of pollution in China, it’s not a giant intellectual leap to imagine the same thing happening to a snake.

Currently, scientists at West Normal University in Nanchang, China, are performing an autopsy to determine whether or not this represents a novel mutation, or if this strange chimera is simply a fabrication.

[via The Daily Telegraph]