How exactly does one build an earthquake-proof building? If you answered “make sure the structure rocks completely off its foundation,”... 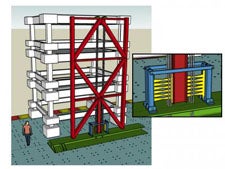 How exactly does one build an earthquake-proof building? If you answered “make sure the structure rocks completely off its foundation,” you’re actually in good company. A research team led by Stanford and the University of Illinois successfully tested a structural system that holds a building together through a magnitude-seven earthquake, and even pulls it back upright on its foundation when the quaking stops. The key: embracing the shaking, by limiting the damage to a few flexible, replaceable areas within the building’s frame.

When a quake strikes, the new system dissipates energy through steel frames in the building’s core and exterior. These frames are free to rock up and down within fittings fixed at their bases. Steel tendons made from twisted steel cables run the length of each frame, keeping the frames from moving so much that the building could shear. When the quake stops, these tensile tendons pull the frames back down into the “shoes” at their bases, returning the building to its plumb, upright position.

So where does all that energy go? At the base of each frame is a flexible steel “fuse” that takes the brunt of the force, keeping the frame and constituent tendons from shouldering the entire load. The fuses are easily replaceable when they blow — just like an electrical fuse — so after a quake, the building can be refitted with fresh fuses for its next bout with Earth’s occasional tectonic fits.

The technology, which just completed testing at Japan’s Hyogo Earthquake Engineering Research Center, is the culmination of more than a decade of ideas and previous-gen technologies. While many elements of the system have been tested before, this is the first time they’ve been melded into a complete system and successfully put through the motions. For testing, the team constructed a three-quarters-size model of a standard three-story office building, with a footprint 120 by 180 feet, and a mass comparable to a full-size building. Then they shook the hell out of it. Even at a magnitude 1.75 times that of the 1994 Northridge earthquake — itself a 6.7 on the Richter scale — the only damage recorded in the frame was in the replaceable fuses.

Perhaps the most promising aspect of the system is that it can be retrofitted to existing buildings using readily available materials. The team hopes the technology will not only save countless lives, but will greatly soften the economic and environmental costs earthquakes can exact on societies. Even directly after a violent quake, buildings remain habitable, keeping humanitarian disasters at bay. Meanwhile, the technology adds to a community’s sustainability, as tearing down and rebuilding half a city’s buildings requires tons of landfill space as well as new concrete and construction materials. Being on the top floor of a building as it shakes free from its foundation is a scary thought, but the alternative is indisputably worse.