Why A Blue LED Is Worth A Nobel Prize

Plus, a little history of making semiconductors glow 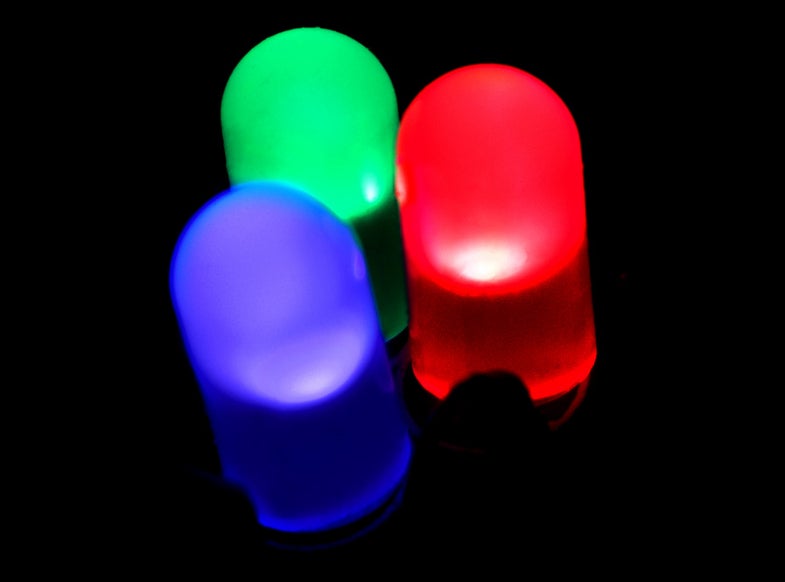 Three scientists have jointly earned the Nobel Prize in physics for their work on blue LEDs, or light-emitting diodes. Why blue in particular? Well, blue was the last — and most difficult — advance required to create white LED light. And with white LED light, companies are able to create smartphone and computer screens, as well as light bulbs that last longer and use less electricity than any bulb invented before.

LEDs are basically semiconductors that have been built so they emit light when they’re activated. Different chemicals give different LEDs their colors. Engineers made the first LEDs in the 1950s and 60s. Early iterations included laser-emitting devices that worked only when bathed in liquid nitrogen. At the time, scientists developed LEDs that emitted everything from infrared light to green light… but they couldn’t quite get to blue. That required chemicals, including carefully-created crystals, that they weren’t yet able to make in the lab.

Once they did figure it out, however, the results were remarkable. A modern white LED lightblub converts more than 50 percent of the electricity it uses into light. Compare that to the 4 percent conversion rate for incandescent bulbs, and you have one efficient bulb. Besides saving money and electricity for all users, white LEDs’ efficiency makes them appealing for getting lighting to folks living in regions without electricity supply. A solar installation can charge an LED lamp to last a long time, allowing kids to do homework at night and small businesses to continue working after dark.

A modern white LED lightblub converts more than 50 percent of the electricity it uses into light. Compare that to the 4 percent conversion rate for incandescent bulbs.

LEDs also last up to 100,000 hours, compared to 10,000 hours for fluorescent lights and 1,000 hours for incandescent bulbs. Switching more houses and buildings over to LEDs could significantly reduce the world’s electricity and materials consumption for lighting.

A white LED light is easy to make from a blue one. Engineers use a blue LED to excite some kind of fluorescent chemical in the bulb. That converts the blue light to white light.

Two of this year’s prize winners, Isamu Akasaki and Hiroshi Amano, worked together on producing high-quality gallium nitride, a chemical that appears in many of the layers in a blue LED. The previous red and green LEDs used gallium phosphide, which was easier to produce. Akasaki and Amano discovered how to add chemicals to gallium nitride semiconductors in such a way that they would emit light efficiently. The pair built structures with layers of gallium nitride alloys.

Both Nakamura’s and Akasaki’s groups will continue to work on making even more efficient blue LEDs, the committee for the Nobel Prize in physics said in a statement. Nakamura is now a professor at the University of California, Santa Barbara, although he began his LED research at a small Japanese chemical company called Nichia Chemical Corporation. Akasaki and Amano are professors at Nagoya University in Japan.

In the future, engineers may make white LEDs by combining red, green, and blue ones, which would make a light with tunable colors, the Nobel Committee wrote.