They can't reproduce, but they still make us question what it really means to be "alive." 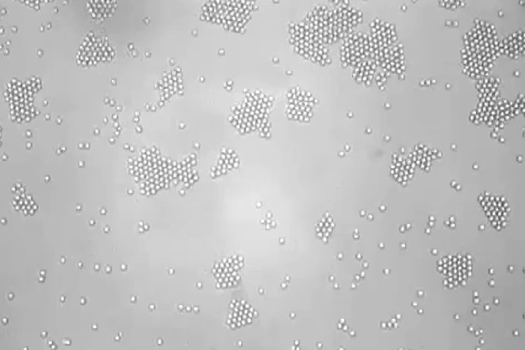 The best way to understand something–such as life–is to build it yourself. That’s why, determined to understand the way groups move, a team of New York University physicists set out to create particles that could imitate the way flocks of birds, schools of fish and even colonies of bacteria organize and move together.

What they ended up with, described in Science magazine yesterday, were two-dimensional “living crystals” that form, break, explode and re-form themselves elsewhere.

The crystals have metabolism and mobility, two of the general requirements for classifying something as life, according to Paul Chaikin, one of the paper’s authors, but they lack the ability to reproduce. By one count, there are a total of seven requirements that an organism should exhibit to be considered life.

“Here we show that with a simple, synthetic active system, we can reproduce some features of living systems,” lead author Jeremie Palacci told Wired. “I do not think this makes our systems alive, but it stresses the fact that the limit between the two is somewhat arbitrary.”

Palacci and Chaikin are now working on a particle that has a metabolism and can self-replicate, but lacks mobility.