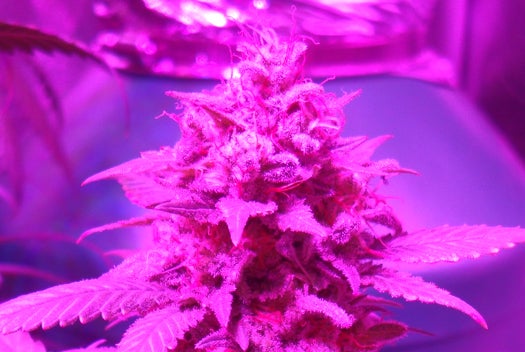 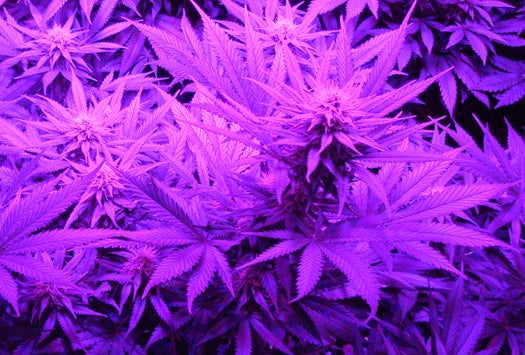 Plants Under A Red Sun

As of 2013, 24 states and Washington, DC, have either legalized marijuana or decriminalized possession of it. One of my friends lives in a state where medical marijuana is now legal, and he has taken full advantage of this to start growing the plant, which helps him manage the symptoms of a chronic illness, in his basement. Rather than use his real name, I’ll just refer to him by his online handle, GrowingGreenLED. I’ve known GGL for years, and I knew that even when it was illegal, he used marijuana for medical reasons. The whole grow-your-own was a new thing for him — and me. Curious about the enterprise, I asked if he’d be willing to chat with me about the ins and outs of growing one’s own plants. In particular, I was curious about his all-LED setup.

LED lights have been taking over all areas of normal life, replacing horrible blue-tinted compact fluorescents, incandescents, and even specialty bulbs (stage lighting, street lights and the like) such as metal halide high-intensity discharge lamps or high-pressure sodium lamps, but they’re still something of a controversial topic in the pot-growing world. Until recently, they simply did not put out enough photons to keep plants happy. LED technology has improved markedly over the last five years, and today’s 10-watt diodes can give out something like 800-900 lumens, on par with standard metal-halide grow lamps, and slightly lower than high-pressure sodium.

In order to grow healthy marijuana plants, then coax them to flower and produce a lot of cannabinoids, the grower must provide the plants with lots of light of the proper wavelengths, control the length of “day” that the plant experiences during its life cycle, and control the temperature so as to not stress the plants.

The grow-lamp setup of choice in the recent past was a combination of metal-halide discharge lamps and high-pressure sodium lamps. The two kinds of lamps present complementary spectral characteristics that marijuana plants needs for the vegetative and flowering stages, and the two kinds of lamps generate a lot of lumens — that is, a lot of photons that the plants can use for photosynthesis. What those lights also produced was a lot of heat–and big electricity bills. And the bulbs themselves, while lasting longer than an incandescent bulb, still burned out fairly quickly. LEDs have much longer lifetimes than either of those lamps, on the order of 30,000 hours of use; metal-halide lamps live between 6,000 and 15,000 hours. 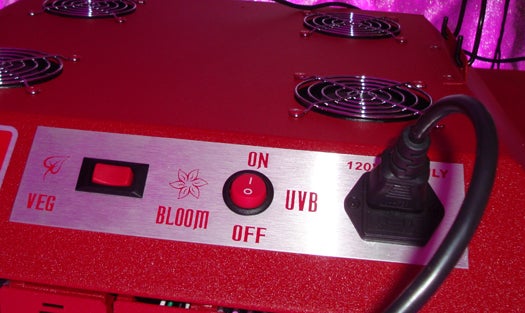 Close-up of the panel where the grower chooses between veg and flowering spectral modes on the LED grow lights.

Another benefit of LED arrays is their capacity for spectral tuning. A single lamp could have both a collection of blue-light and red-light LEDs; selectively turning off some LEDs of a particular color will tune the overall color of the light.

According to GGL, in veg mode, the plants like a bit of blue light mixed in with the typical yellow-red to encourage plant growth. GGL uses Solar Flare brand LED lights made by California Light Works, which add light between 475nm and 500nm to the spectrum. In flowering, light between 600nm and 700nm is best. So being able to tune the light source (by picking only certain colors of LED to use in a lighting setup) so that they’re only producing the wavelengths that each phase requires will result in better flowers for less wasted energy and waste heat.

Waste heat is a problem, especially for growers who keep their plants in grow-tents–fabric enclosures that help the grower maintain the optimum environment for plant growth and flowering–that may not be well-ventilated. Stressed plants don’t produce as many flowers (which means yields will be bad), and so maintaining temperatures below 80°F is desirable. (GGL also keeps humidity at around 55 percent, by switching a ventilation fan on and off, to suppress the growth of mildew on the plants.)

GGL says that he decided to splash out for LEDs for a couple of reasons: He doesn’t want the family electricity bill to skyrocket. And, he admits, he’s an early-adopter tech nerd. At present, he says he has about 1050 watts worth of lighting equipment, spread out between the two tents that he grows his crop in, the veg tent and the flowering tent. GGL uses light units made by California Light Works — the aforementioned Solar Flare lights, plus Solar Storm rigs as well, but that company is far from the only producers of LED grow lights.

So, how are his plants doing? According to a lab analysis of a couple of his plants, the THC levels are some of the highest that the lab had ever seen. For someone who uses the plant to alleviate pain rather than merely as a recreational experience, that’s a good sign. And despite tending to his allotment of healthy plants (each state has a different number of plants one can legally grow), his power bill has not increased significantly. I think mostly, though, GGL just loves a good high/low tech project. Gardening is generally pretty low-tech. Growing plants in one’s basement in order to maximize output while minimizing input is not, and it satisfies GGL’s inner tech geek in ways that just cultivating plants would not. He gets the same way about brewing beer, about hunting for razor clams, and about re-engineering instruments for RockBand. GGL is a man after PopSci’s geeky heart and brain if there ever was one.