Researchers Create A ‘Google Map’ Of The Human Metabolism

Never get lost in your own metabolic processes again! 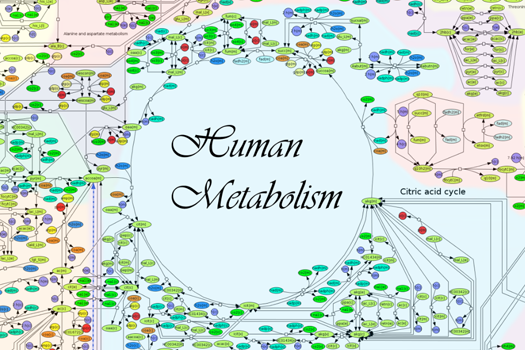 Metabolism, the blanket term for all the physical and chemical processes that your body employs to convert food into energy, plays an important role in health and disease. More comprehensive biological modeling of our metabolism can help us compute and predict how our bodies will respond to drugs, in addition to expanding our knowledge of the connection between our body’s chemical interactions and a variety of diseases.

Multiple models of the human metabolism exist, but Recon 2 is so far the most comprehensive. While the human metabolic network isn’t actually Google Maps’ latest attempt at virtual tourism (color me disappointed), the comparison comes from Recon 2’s capacity to incorporate many complex details from scientific literature and other models into a single interactive map. Recon 2 is an expansion of a prior model, Recon 1, which has been used in researching the molecular targets of cancer drugs and the affects of off-target drugs.

A statement from UC San Diego explains how the Recon 2 could be used in identifying metabolic pathways for drug delivery, using existing gene expression databases:

Recon 2 allows researchers to use this existing gene expression data and knowledge of the entire metabolic network to figure how certain drugs would affect specific metabolic pathways found to create the conditions for cancerous cell growth, for example. They could then conduct virtual experiments to see whether the drug can fix the metabolic imbalance causing the disease.

To better understand how metabolism plays a part in our health, the map provides an opportunity to both zoom in on the finer details of certain metabolic reactions and to gain a more comprehensive perspective and find patterns and relationships among pathways and processes.

“This is essential to understanding where and how specific metabolic pathways go off track to create disease,” according to Bernhard Palsson, a professor of bioengineering at the University of California, San Diego. “It’s like having the coordinates of all the cars in town, but no street map. Without this tool, we don’t know why people are moving the way they are.”

The researchers describe the map in a study published online this week in Nature Biotechnology.

The community-driven map was expanded at “reconstruction annotation jamborees,” a series of meetings between researchers around the world, sort of like the international Boy Scouts of biomedicine. The participants consolidated data, established common standards, and simplified usability together as they expanded the network from 3,300 biochemical reactions to 7,400.

Ines Thiele, the lead author and a professor at the University of Iceland, says predictions based on Recon 2 have already been successfully used to diagnose some inherited metabolic diseases.

“I envision it being used to personalize diagnosis and treatment to meet the needs of individual patients,” she said. She predicts that in the future, doctors could use virtual models of a patient’s individual metabolism to more effectively treat diabetes, cancer and neurodegenerative diseases.

More jamborees may be in the works, since Recon 2 is far from a complete map. It only represents a fraction of the estimated 20,000 protein-coding genes in the human genome. As the paper mentions, “Such an increase in scope does not necessarily constitute an improvement in utility over the previous version: expanding the reconstruction to resolve existing gaps and dead-end metabolites may introduce additional gaps and dead ends elsewhere.”