16,000 Dead Pigs In The Huangpu: Can You Still Drink Shanghai’s Water?

Since the beginning of the month, officials have fished out 16,000 pig carcasses found in the river that serves tap water to Shanghai. Is it really still safe to drink, as officials say? 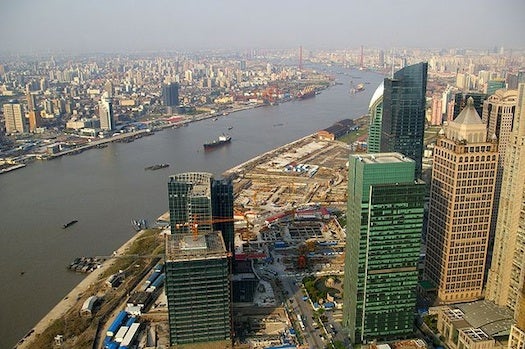 Chinese officials have fished more than 16,000 pig carcasses from the Huangpu River, from which more than one in five Shanghai residents draw their drinking water. Remember when it was just 2,000 pigs and that seemed pretty crazy? Meanwhile, officials keep saying that the water is still safe to drink. How likely is that, really?

Pig carcasses dumped in water could release pathogenic bacteria into the water. Even healthy pigs carry some manure in their bodies, which in turn has E. coli that could cause diarrhea and other symptoms. The greatest danger would come from carcasses left long enough that they bloat and explode, releasing toxic gases, or start feeding an overpopulation of bacteria, which would reduce the water’s oxygen levels for fish, says Saqib Mukhtar, an agricultural engineer at Texas A&M University. News photos show mostly intact carcasses, though news reports haven’t specified the carcasses’ condition.

Popular Science asked experts from two groups that work on water quality in China to weigh in on the pigs’ potential effects on Shanghai’s drinking water. (It’s important to note that none of the experts we found work in the Huangpu directly, nor have they done their own testing of the Huangpu River. Instead, they answered using what they’ve learned from the news and from their own work on other Chinese rivers.)

It is possible that the drinking water in Shanghai is still fine, they say. However, government agencies have not been transparent about how often they’ve tested the river and what exactly they mean when they say they’ve returned the river to normal, says Kristen MacDonald, the China program director for Pacific Environment, a non-governmental organization.

There are a few things that might be keeping Shanghai’s tap water useable. The Huangpu River system is large and continually flowing, so it can clear impurities quickly, Jun Shentu, a staff member at Green Zhejiang, a group that focuses on tributaries of the Huangpu, says in an email.

Tap water in Shanghai is taken from near the center of the river, at the bottom, where the water quality is better, Shentu says. And local water authorities have upped the chlorine in Shanghai’s water, to improve sterilization.

It is hard to know for sure what the effects of the pigs have been because those data points aren’t publicly available, MacDonald says. In addition, officials may not actually know exactly to what level of quality to return the river, because they didn’t have good numbers on the water quality beforehand.

“One of the things that’s always been rather opaque both to me and to the environmental watchdogs groups I work with is how often testing is done and how thoroughly,” MacDonald says. (Shentu says officials tested the Huangpu for nine routine indicators of water quality, including turbidity, color and odor. They have also added non-routine tests to target the pig situation, looking for Streptococcus, Salmonella, E. coli O157 and thermotolerant coliform bacteria.)

A “return to quality” may not be that great, either. On the Chinese Ministry of Environmental Protection’s six-point scale, with a six being unsuitable even for industrial use, different sections of the Huangpu rate at a four or five. The Huangpu gets industrial pollutants from factories as well as agricultural runoff, MacDonald says.

Although they offer daily updates on the Huangpu’s water quality, Chinese officials haven’t explained why farmers have recently chosen, against regulations, to dump so many pigs into the river, the Guardian reported March 22.

“It’s not too surprising to me that the farmers that were raising the pigs decided this is the best option,” MacDonald says. “To do it in a more safe and sanitary way would have cost them a lot of money. So it’s definitely a case of there being a regulatory gap where it’s not clear who is responsible for dealing with protecting rivers from this kind of dumping.”