New nominations for energy secretary and EPA head will probably face uphill battles in the Senate. 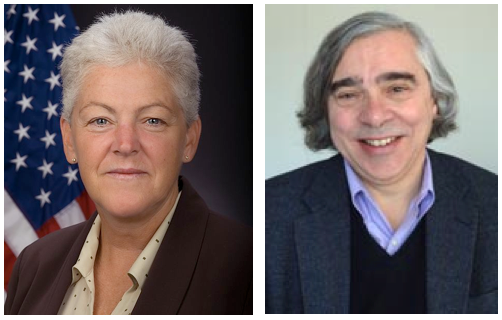 The likely next secretary of energy is a physics professor researching new energy at MIT, and the next chief of the Environmental Protection Agency has spent years developing regulations to combat greenhouse gas emissions. Both were formally nominated today to fill some of the many empty posts in President Obama’s cabinet as his second term rolls along. And both come from backgrounds that suggest Obama really does want to do something, at least regulation-wise, about climate change.

Obama’s Department of Energy pick, Ernest Moniz, researches how coal, natural gas, nuclear power and solar energy will fare in a future faced with tough requirements for carbon dioxide emissions. At a speech in Chile in February, Moniz said electricity demands will triple in the coming years, which will cause a “catastrophic increase in the temperature” of Earth unless new innovations start to replace old energy sources. He’s been at MIT since 1973 and currently directs the MIT Energy Initiative and the Laboratory for Energy and Environment.

Gina McCarthy is an anthropologist and currently the EPA undersecretary for air and radiation. She’s been on the front lines at EPA since Obama took office, shepherding so many new environmental regulations that she won the nickname of “green quarterback.”

While Obama and former EPA head Lisa Jackson have long been accused of waging war on coal through new power plant emissions regulations, McCarthy was the one behind the scenes actually writing those rules, as the National Journal explains it. She authored regulations that curbed mercury and soot emissions from coal-fired power plants. While working in Massachusetts’ office of environmental affairs, she dubbed the state’s biggest polluters the “Filthy Five,” and collaborated with hunters and environmentalists to address mercury pollution by dentists, according to the Washington Post.

It will be fun to watch McCarthy’s confirmation hearings for a lot of reasons, including her unvarnished Boston accent and sense of humor. Though her views have raised the hackles of many Republicans and energy industry leaders, they still like her, because she at least invites them to the table. The National Journal has a thorough write-up of her contributions, which you can read here.

Moniz is no stranger to the West Wing, either, having served several roles in government: Under President Clinton, he served as associate director for science in the White House’s Office of Science and Technology Policy, and as undersecretary for energy; and he is a member of Obama’s Science and Technology Advisory Council.

After formal nominations Monday, they’ll face confirmation hearings in the Senate. Who knows how long that will take.