The State of The Guardian’s SOTU Infographic Is…Dumber

This chart tells you that "the linguistic standard of the presidential address has declined" over time. The problem is, it's wrong. 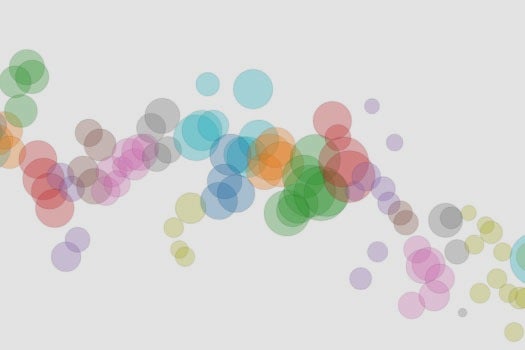 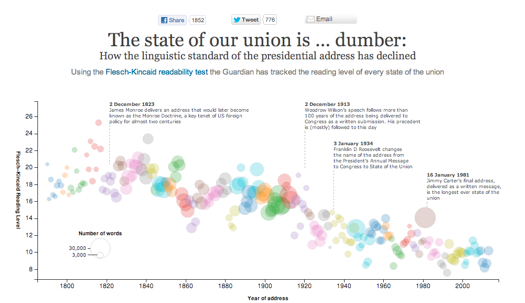 Yesterday, as a run-up to Obama’s State of the Union address, The Guardian published an interactive infographic called “The state of our union is … dumber: How the linguistic standard of the presidential address has declined.”

The chart plotted the reading level of every SOTU address since the country’s founding along a timeline. Each bubble represents a single speech, with the height of the bubble indicating grade level, and the bubble’s size indicating speech length. With the exception of a few outliers–Madison blew everyone away in 1815 with a speech targeted for an audience in grade 25.3; Lincoln delivered an address in 1862 of exceptionally low standard–the trend is indeed clear: the annual State of the Union had gotten progressively dumber over time.

Pretty scary, huh? At least, it would be scary if the chart were actually showing the declining linguistic standard of presidential speeches. But, in fact, it’s the graphic itself–or, at least, The Guardian‘s packaging of the graphic–that is doing the dumbing-down, by using the simplistic Flesch-Kincaid readability test as a metric for the “linguistic standard” of presidential rhetoric.

In reality, the Flesch-Kincaid readability test measures two things: the length of the words in a piece of prose, and the number of words per sentence. As columnist and linguist Ben Zimmer explains, the test was developed in the 1970s, not as a metric for the intelligence, complexity, or lingual eloquence contained in a text, but as a “rough and ready analytical tool” for assessing the appropriateness of texts for different grade levels. If a book or article or written speech scores a 5, a fifth-grader should be able to get through it without getting lost in a sea of clauses and semicolons.

So, what does this graphic really tell us? Words and/or sentences have been getting shorter. And what does that mean? Well, it could mean that the English language is being reduced to an ugly nonsense heap of monosyllabic words. Except, when you break the State of the Union addresses down by both word length and sentence length, as linguist Mark Liberman did a while back in response to another linguistic hell-in-a-handbasket Guardian article, the actual trend becomes a lot clearer: 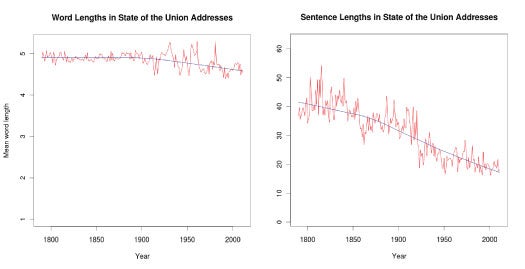 Word Length and Sentence Length in State of the Union Addresses

Okay, so word length has decreased slightly over time, and sentence length has decreased dramatically. That trend may denote a stylistic shift in political rhetoric, says Zimmer, but it tells you very little about the quality or intellectual prowess of each sentence’s content. Instead, it probably reflects the fact that politicians have caught on to the idea that audiences don’t really want to walk away from a speech in awe of the orator’s masterful use of the semi-colon; they want to walk away knowing what the orator was talking about.

Maybe The Guardian knew that it was grossly overstating things with its “declining linguistic standard” headline; perhaps it knew that its audience didn’t want to click on an article called “The State of the Union: Sentences Just Keep Getting Shorter And Easier To Follow Over Time.”

Instead, The Guardian chose to reinforce the ancient, cherished myth of cultural/societal degeneration, because that’s what people wanted to hear. Responses to the graphic on Twitter yesterday reflect people’s readiness for the news that we’re all getting lazier and dumber: “Wow, proof intelligence is on the decline”; “pretty scary”; “exactly what I’d expect.”

Next time, how about reprinting an excerpt from “A Proposal for Correcting, Improving and Ascertaining the English Tongue”? It was written by the exquisite grammarian Jonathan Swift back in 1712, when the English Tongue was much Purer:

I do here in the Name of all the Learned and Polite Persons of the Nation, complain to your Lordship, as First Minister, that our Language is extremely imperfect; that its daily Improvements are by no means in proportion to its daily Corruptions; and the Pretenders to polish and refine it, have chiefly multiplied Abuses and Absurdities; and, that in many Instances, it offends against every Part of Grammar.