FYI: How Do You Ship A Dinosaur Halfway Around The World?

A large Mongolian dinosaur fossil, subject of a legal battle last year, is now finally free to return to its home country. How will it get there? 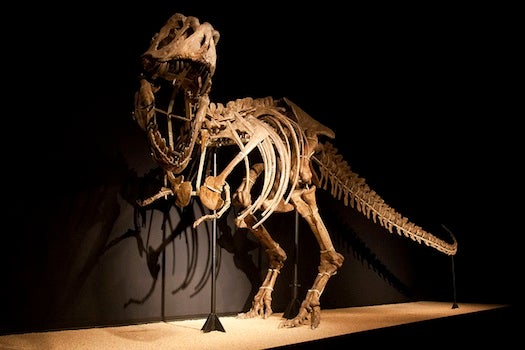 Tarbosaurus bataar is going home. And the journey, though long, won’t be that bad–especially for a 70 million-year-old like him (or her).

The 8-foot-tall, fully mounted Tyrannosaurus rex relative first found itself in the news last May, when it went to auction in New York. In an unusual move, the Mongolian government decided to sue, saying that the Tarbosaurus must have come from the Gobi Desert in Mongolia, as that’s the only place Tarbosaurs have ever been found. (Like several other countries, though not the U.S., Mongolia considers fossils to be a part of its national heritage, and it’s illegal to sell Mongolian fossils privately.) Private fossils dealer Eric Prokopi pleaded guilty to smuggling the bones in December. On February 13, a ruling from a U.S. district judge found the fossil legally free to return to Mongolia, as no other claimants stepped up after Prokopi’s plea.

The story got us wondering: What’s it like to ship such a large and precious specimen halfway across the globe?

Turns out it’s typically pretty easy, several paleontologists we contacted say. But the geopolitical circumstances surrounding Tarbosaurus bataar might make this case more challenging than most.

Here’s what usually happens: “You’d take all the bones apart, and all the bones go in individual cases,” Kenneth Lacovara, a Drexel University paleontologist, says. Researchers can easily build made-to-measure plywood cases for the bone pieces, cushioning the fossils with foam. “We use packing peanuts. We use foam that is meant for home insulation,” Lacovara says. “Sometimes we use the foam that you’ll see in, like, expensive camera cases.” What foam he and his lab members use depends on the size of the bone, he says.

A few paleontologists rely on a company that specializes in shipping for rock bands.After auction, the Tarbosaur was broken down and stored in four large boxes. For shipping, it will probably be separated into a few dozen parts, Lacovara says. He guesses the entire fossil could weigh 1,000 to 2,000 pounds, although many variables about how the specimen fossilized and how it was prepared may change its weight.

Once packed, dinosaurs, like timber, olive oil, care packages or any other cargo, may go by air or by sea.

“We ship a Tyrannosaurus skull back and forth, usually air freight, but sometimes on a ship,” says Jack Horner, a Montana State University paleontologist who does field work in Mongolia. He and his students often ship specimens between the U.S. and Japan for traveling shows. “Shipping is easy these days!” he wrote in an email.

The Mongolian Ministry of Culture, Sport and Tourism will be responsible for shipping the Tarbosaur, but the ministry doesn’t yet know where it’ll get funding, whether the T. bataar will go by air or by sea, or many other details, says Minister Tsedevdamba Oyungerel. “Logistical talks just started but nothing is clearly cemented yet,” she wrote in an email.

The talks include hammering out when and where to hold a handover ceremony in New York City. The fossil is now with law enforcement in New York.

Oyungerel expects the Tarbosaur to land in Mongolia in mid to late May, about a year after it first found itself in a marked lot at an auction house in New York’s Chelsea neighborhood.

“I’m happy how the case turned out. I hope this is a real good model they can use in the future to have Mongolian dinosaurs returned to the country,” says Bolortsetseg Minjin, a paleontologist who first saw a TV report about the Tarbosaur’s auction and alerted the Mongolian government. Minjin splits her time between Mongolia and New York and founded the Institute for the Study of Mongolian Dinosaurs in 2007.

The Mongolian government is now working to build a new museum to hold the Tarbosaur, as the country’s existing natural history museum is in disrepair. Oyungerel’s ministry has also put out a call for companies to bid to build three more dinosaur parks across the country. In spite of the Gobi Desert’s rich fossil resources, many Mongolians are unaware of paleontology, Minjin told the Guardian.

When the time comes, Oyungerel hopes for some outside advice on bringing T. bataar home. “We hope we’ll receive some assistance from concerned organizations and companies in these matters,” she said. “It is quite a challenging task for us.”

Ask Us Anything
Dinosaurs