New evidence settles a troubling discrepancy in the timeline of events that led to Earth's last great mass extinction. 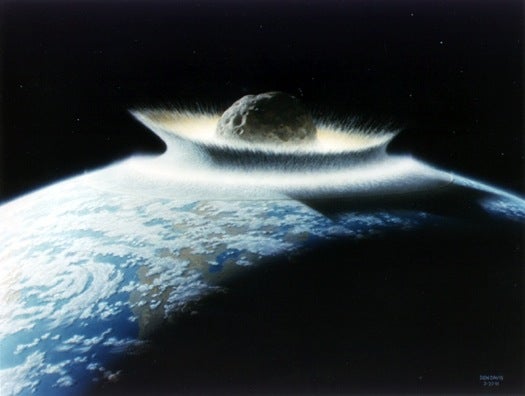 A couple of years ago, an international team of researchers got together to decide, once and for all, whether or not an asteroid crashed into Earth 66 million years ago and, if so, whether the impact would have been catastrophic enough to end the age of the dinosaurs and wipe out 75 percent of all life on the planet.

After reviewing the evidence, which included radioisotope dates from the fossil record and scattered impact debris, as well as measurements of a 100-mile-wide crater in the Gulf of Mexico–the researchers concluded that the answer was yes, to both questions.

But that didn’t settle the matter entirely. Some scientists pointed to evidence of volcanism, climate change, or other potential causes for the dinosaurs’ demise; others weren’t convinced that the two events–impact and extinction–really occurred around the same time.

In fact, the evidence itself didn’t support the idea that the events were contemporaneous: debris from the impact dated the catastrophe to 180,000 years before the end of the dinosaurs.

Last year, Paul Renne, a geologist at the Berkeley Geochronology Center (BGC), decided to get to the bottom of that discrepancy. The existing dates came from radio-isotope measurements that were 20 years old, so Renne teamed up with his colleagues at BGC and UC, Berkeley, as well as researchers in the UK and Netherlands, to re-sample the impact debris.

The researchers’ measurements narrowed the asteroid strike to a range of 11 thousand years, between 66.03 and 66.04 million years ago, making it virtually simultaneous with the extinction.

There’s still good evidence to suggest that the catastrophe was preceded by several sharp climatic swings, which probably put a hurt on much of the life on Earth, but the new evidence leaves little doubt that the asteroid impact was, indeed, the proverbial nail in the dinosaur’s coffin.