How Do You Make A Healthier Cream Cheese That Doesn’t Suck?

A new way of structuring fats could be the key 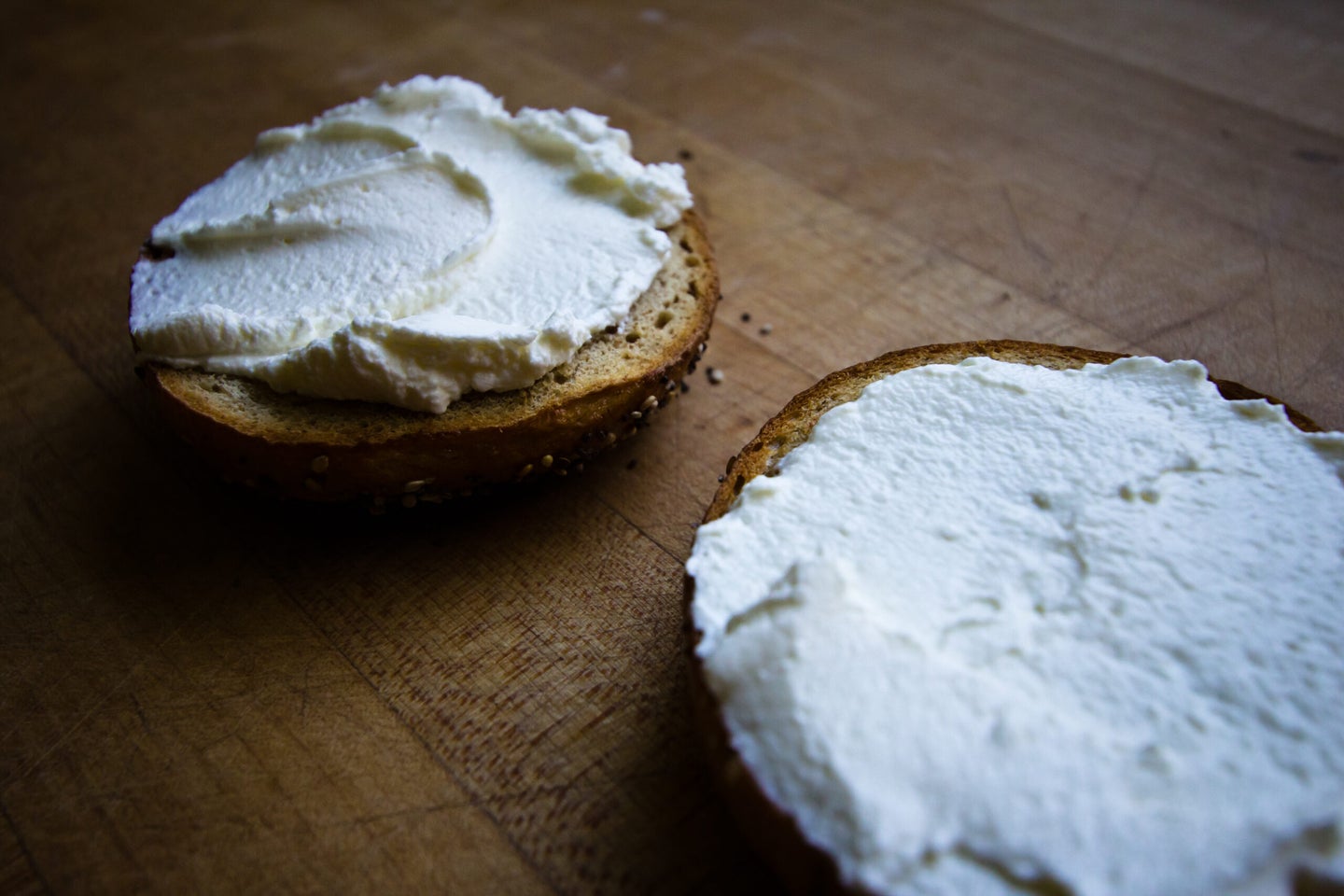 You know the drill: you go to the supermarket and head to the cream cheese section for a container of breakfast’s arguably most important spread. Which one do you pick? The saturated fat-packed original? The low-fat option? The all-natural-gluten-free-non-GMO-non-dairy-tofu spread? Scientists want to make something as good as the original without all of the saturated fat.

Now scientists at The Ohio State University are using a new method that replaces solid saturated milk fat in cream cheese with substances called oleogels, to produce a healthier and cheaper product. They’ve been able to make a cream cheese that looks and feels the same, although the flavor isn’t all there yet.

“You can work on flavor at the end,” principle investigator Farnaz Maleky told Popular Science. The main purpose of this study was instead to produce something with a familiar texture and behavior, by building up a solid network of microscopic fat molecules similar to that of full-fat cream cheese, but without saturated fats.

Oleogels are a relatively new kind of food product — an oil turned into gel form. To make them, a vegetable oil like soybean oil is heated with an “organogelator,” a substance that causes the oil to restructure itself as a semi-solid gel. Maleky’s team used two different organogelators: rice bran wax, made from oil that comes from rice, and ethylcellulose, an engineered version of regular old cellulose. It’s kind of like making jello.

When they tested the oleogel-based cream cheeses against original, fat free, or homemade vegetable oil-based cream cheeses, with both lab equipment and a tasting panel, they found the rice bran wax cream cheese was just as spreadable, sticky, and hard as regular full-fat cream cheese. It didn’t taste as good and the panel could taste the rice bran wax — but flavor wasn’t the priority, said Maleky. The oleogel cream cheese’s saturated fat content was 90 percent lower, and the unsaturated fat content was around 120 higher than the full-fat spread. They published their most recent results in the journal Food Research International.

There’s plenty of talk in the nutrition world today about just how good fats and oils are for your body. The only thing you can really say without getting an earful from either a food chemist, doctor or nutritionist is that solid trans fats like those in margarine are probably bad, and liquid unsaturated fats like those in olive oil are probably good. Even those statements might set off some people including low fat dieters or saturated fat lovers like myself, for instance.

But the fats are for more than nutrition. “Milk fat is very expensive. Soon we’ll talk about feeding [a world population of] 9 billion people, so we’ve made a cheaper cream cheese with vegetable oil,” said Maleky. Meanwhile, scientists have only started to explore how they could substitute trans and saturated fats with organogelated vegetable oils in foods like ice cream, cookies and even hot dogs. Maleky and her team are now working on creating cream cheeses with deodorized rice bran wax, plus some added flavors, to make something that tastes more like what you find in stores.

This article was updated to better reflect the flavor of the oleogel cream cheese.