Did Penicillin Kickstart The Sexual Revolution?

A new study argues a cure for syphilis caused the advent of modern sexuality, not the pill. 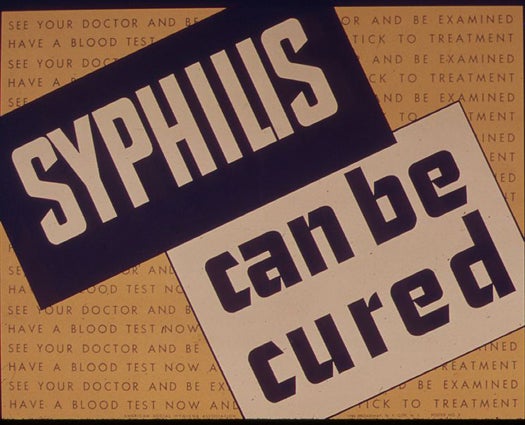 In 1972, the Supreme Court struck down a Massachusetts law restricting the distribution of birth control to unmarried women, and by 1973, 10 million women were using the pill. This marked the apex of the sexual revolution, or so conventional scholarship tells us. Freed from the fear of getting pregnant, women begin engaging in more sex outside of the traditional confines of marriage.

But a new study suggests that the sexual revolution began long before birth control gained popularity in the 1960s and 1970s. Instead, modern sexual mores may have arisen from another kind of prevention — a cure for syphilis.

As World War II raged, the U.S. population, including soldiers, were dying of syphilis at an alarming rate. At the disease’s peak in 1939, syphilis killed 20,000 people. An estimated 600,000 Americans were infected by the mid-1940s. War propaganda warned Americans that STDs wasted manpower — eradicating syphilis among both the military and civilians became a priority.

Penicillin, discovered in 1928, finally began to be used as a cure for syphilis in 1943. Following a wide-scale public health campaign, syphilis incidence fell by 95 percent between 1947 and 1957, and by the mid-1950s the epidemic had largely collapsed.

A new analysis published in the January issue of the Archives of Sexual Behavior argues that curing syphilis contributed to riskier, nontraditional sexual behaviors. By combing through national statistics from the 1930s to the 1970s, Emory University economist Andrew Francis found that the era of modern sexuality began in the mid to late 1950s, not during the swinging ’60s.

While access to contraceptives may have played a role in the rise of sexual freedom, the pill wasn’t actually widely accessible until the early 1970s. But immediately following the rapid decrease in syphilis-related deaths in the 1950s, the rate of risky sexual behavior went up.

Francis tracked rates of syphilis as compared to the gonorrhea incidence rate, the illegitimate birth rate and the rate of teenage births — all indicators of more nontraditional sex. As sex outside of marriage became less of a deathtrap, people did it more.

The correlation between risky sex and decreased risk of disease has implications for the contemporary AIDS policy, the study argues. The death rates for syphilis and AIDS were on the same order of magnitude in their respective peak years, 1939 and 1995. Francis postulates that the risky behaviors encouraged by the collapse of syphilis may have contributed to the spread of HIV in later years.

“The possible relationship between the collapse of syphilis and the rise of HIV implies that optimal health policy strategy is holistic and longsighted,” he writes. “To focus exclusively on the defeat of one disease can set the stage for the onset of another if preemptive measures are not taken.”