Scientists Have No Idea Why U.S. Teens Are Having Fewer Babies Than Ever

We're doing so much better than teens in the 1950s.

The U.S. National Center for Health Statistics released today its latest report on American teenagers having babies. The results are both happy and strange. American teens are having babies at their lowest rate ever — and that rate is falling fast. Yet, as Vox discovered, nobody knows why this is happening. One of the steadiest trends in American life is inexplicable.

Here’s the first graph in the NCHS report, showing a peak in teen births in the late 1950s, followed by general decline. The drop has been especially rapid since 2007: 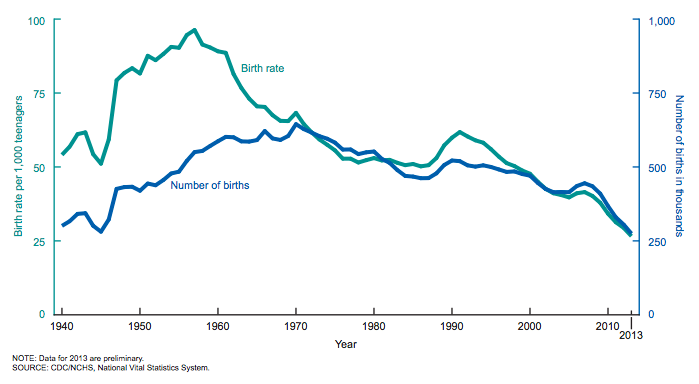 Births and Birth Rates for American Teenagers Aged 15 to 19

This is great news. Girls who become pregnant are less likely to finish school and more likely to struggle with money, so staying baby-free opens up opportunities for them. Kids born to teen moms are more likely to be born premature, which, in turn, is associated with health problems — so a lower U.S. teen pregnancy rate means a greater proportion of Americans having a strong start in life. And if you’re really cold-hearted, think about it this way: The National Campaign to Prevent Teen and Unplanned Pregnancy estimates that teen births cost U.S. taxpayers $9.4 billion in 2010 alone.

Vox’s Sarah Kliff talked to social scientists about changes in the U.S. that could have led to these declines — especially the 36 percent drop in teen births since 2007. She found several interesting hypotheses (increase in birth control access, better sex education, etc.), but none completely explains the movement. It can be frustrating to hear questions without answers, but the Vox story is a satisfying read. It’s a traipse through some of the major recent forces in American culture, with a stop at 16 and Pregnant along the way.

The bottom line is: This is weird, and because it’s weird, these sharp yearly drops in teen births may not continue, although more moderate declines may occur. Another takeaway is that while it may be weird, it really is happening. Nearly half of American adults — 49 percent — believe the teen birth rate has increased over the last two decades, according to a poll conducted by the National Campaign to Prevent Teen and Unplanned Pregnancy. Don’t be so faithless! At least in this corner of American life, things are getting better.