Is Dr. Oz Bad For Science?

Dr. Oz dispatches advice to one of the biggest audiences in the country. A New Yorker profile asks: Why is so much of that advice bunk? 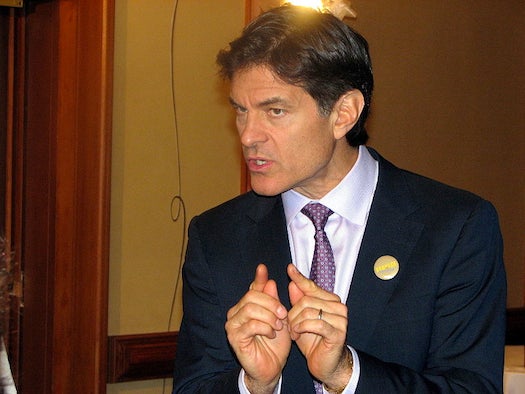 Dr. Oz comes off almost–almost_–charming at first in a New Yorker profile out this week. But of course he does: it’s one of the reasons he has a gigantic audience regularly tuning in to “The Dr. Oz Show.” Michael Specter, the _New Yorker writer, asks why someone like Oz, with Harvard credentials, would promote treatments that are flat-out wrong.

“The Dr. Oz Show” frequently focusses on essential health issues: the proper ways to eat, relax, exercise, and sleep, and how to maintain a healthy heart. Much of the advice Oz offers is sensible, and is rooted solidly in scientific literature. That is why the rest of what he does is so hard to understand. Oz is an experienced surgeon, yet almost daily he employs words that serious scientists shun, like “startling,” “breakthrough,” “radical,” “revolutionary,” and “miracle.” There are miracle drinks and miracle meal plans and miracles to stop aging and miracles to fight fat.

After that, we go deep into The Land of Oz, where the doctor makes some truly bizarre claims. He says he wants to toe the line in the “civil war” between conventional medicine (i.e., medicine that works) and alternative treatments. He’s not one of those bossy doctors; he wants “no more barriers between patient and medicine.” You know, like back in the good old days, when we relied on superstition and our average life expectancy was about 25.

“I would take us all back a thousand years, when our ancestors lived in small villages and there was always a healer in that village–and his job wasn’t to give you heart surgery or medication but to help find a safe place for conversation.”

It gets a little murkier, too, when Oz’s wife, Lisa Oz, is introduced. She refuses to have their children vaccinated (!) and Oz, though he disagrees, capitulates.

“I’m going to get it, but, I’ll tell you, my wife is not going to immunize our kids,” he said, on “Campbell Brown.” He added that he was powerless to reverse her decision, because “when I go home I’m not Dr. Oz, I’m Mr. Oz.” (Oz still disagrees with Lisa. In January, in front of an audience, he gave the CNN host Piers Morgan his first flu shot, and encouraged millions of viewers to get one as well. At home, however, the situation hasn’t changed. He remains Mr. Oz.)

But it’s his show, of course, where pseudo-scientific claims are given the most play. Oz has endorsed some products without much scientific evidence to back them up. He’s gone on-air to preach the merits of Reiki, a spiritual healing practice; green coffee beans; and red palm oil–none of which have been proven effective. Oz doesn’t let the criticisms irk him.

Oz sighed. “Medicine is a very religious experience,” he said. “I have my religion and you have yours. It becomes difficult for us to agree on what we think works, since so much of it is in the eye of the beholder. Data is rarely clean.” All facts come with a point of view. But his spin on it—that one can simply choose those which make sense, rather than data that happen to be true—was chilling. “You find the arguments that support your data,” he said, “and it’s my fact versus your fact.”

He’s right about one thing: data isn’t clean, and medical studies are frequently wrong. Oz knows that; he points out the hundreds of peer-reviewed studies he’s authored. But for the world’s most visible health professional to brush off the scientific method? The closest-held belief in science? You’re damn right that’s chilling.

You can, and should, read the whole New Yorker piece here.