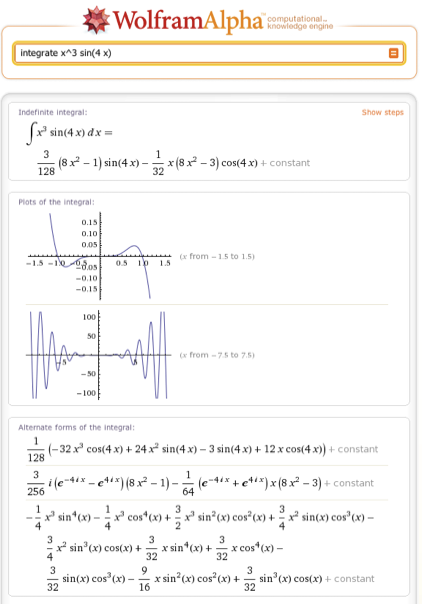 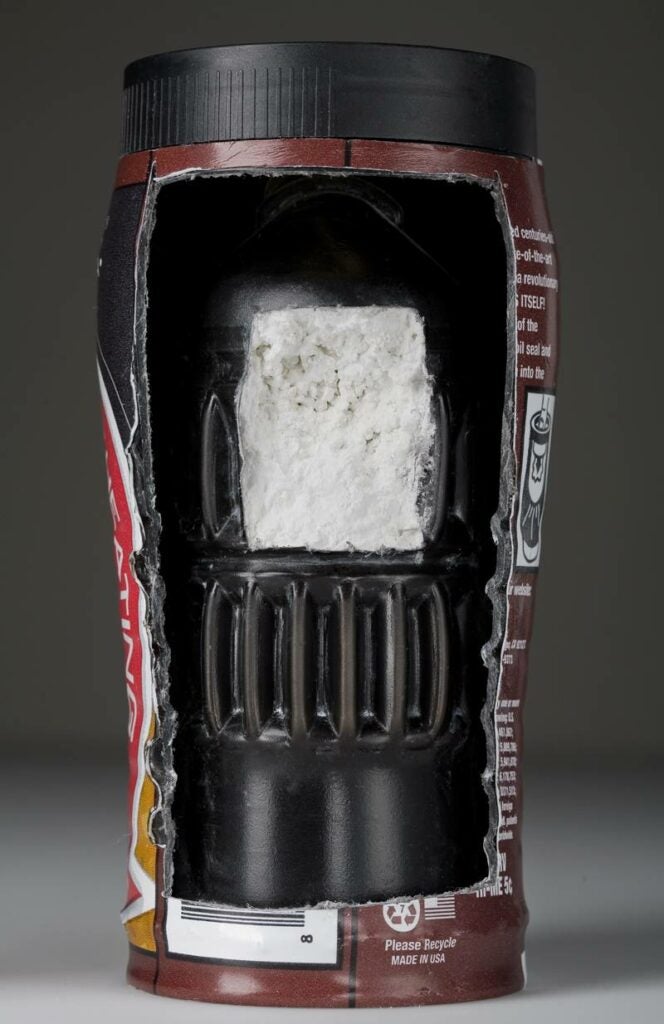 PopSci’s Grouse recently reviewed Wolfram|Alpha. I guess that’s what happens when you ignore your editors for a week: They let someone else write about your project!

PopSci readers know me as the mad scientist behind the Gray Matter column, and the book based on it, Mad Science, but I actually have what I affectionately refer to as a day job, as co-founder of Wolfram Research, Inc, the company behind Wolfram|Alpha. And the reason I was ignoring my editor asking me to write about Wolfram|Alpha is that I was recovering from the lead-up to our public launch of that very service.

(You can see me co-hosting our live launch event on justin.tv. The first 8 or 9 minutes are kind of choppy because of technical difficulties, but eventually you get to see some pretty cool stuff. So far as we know, no one has ever broadcast the process of launching a large web service for the first time, and in the course of our broadcast, we learned several reasons why.)

Wolfram|Alpha generated a huge amount of interest from news media and bloggers, from the New York Times all the way to PopSci. Initially people spent a lot of time writing about whether Wolfram|Alpha was going to be a Google-killer, until we put our PR engine into high gear trying to disabuse people of that notion. (Because the answer, of course, is “no, it’s not going to kill Google.” Going head-to-head against Google on their own turf is like tilting against windmills: It doesn’t work, and everyone laughs at you for trying.)

As the Grouse correctly explains, Wolfram|Alpha is not a search engine. Search engines are like parents who refuse to do your homework for you, just giving you hints about where you might be able to find the answers. For example, suppose you want to find out how many calories are a in a sugar-coated buttered Milky Way bar, a recipe of your own devising that involves one ounce of butter, one cup of sugar, and one Milky Way bar.

To figure this out using Google, you have to search for some general term, maybe “nutrition information”, to find a website that lists calories per gram for each of the ingredients, and for Milky Way bars specifically. Then you need to search for conversion factors to figure out how many grams of butter are in one cup (no, Google’s calculator won’t do even that for you). Finally, you have to multiply the Calories per gram by how many grams you have and add up the total. 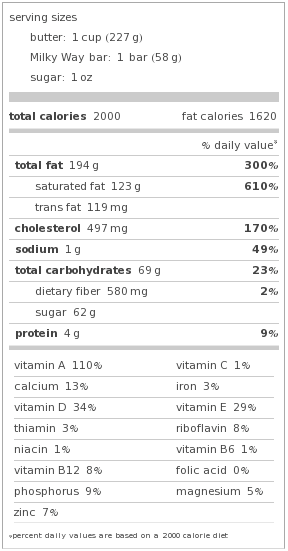 Like I said, Google is like an annoying parent who makes you do all the work yourself.

Wolfram|Alpha simply gives you the answer. Enter the query “how many calories in one ounce sugar and one cup butter and one milky way bar” and Wolfram|Alpha immediately tells you the answer, 2000 Calories (coincidentally, exactly the total recommended number of calories per day for an adult).

And just in case you were interested, it also prints out a complete nutrition information label, just like you’d find on the side of a box of cereal, letting you know that along with all the calories you need for the day, the recipe also provides six times your allotment of saturated fat.

Note that this label did not exist before you asked for it. Wolfram|Alpha didn’t find it somewhere on someone’s web page, because it doesn’t exist on anyone’s web page. (That’s why Google is unable to answer the question: Google can only answer questions whose answers have already been published somewhere on the web, which is of course a huge limitation.)

Instead, Wolfram|Alpha created the label out of thin air, combining its general knowledge about nutrition information with the specific numerical quantities you put into your query. It did the work for you. And while this may be bad practice if you’re trying to help your kid with homework, it is a tremendous relief if you’re a grownup who just wants to get the darn answer.

The Grouse’s review of Wolfram|Alpha was pretty much spot-on, right down to the complaint that Wolfram|Alpha is not as much fun as Google to play around with. Well, sorry.

Wolfram Does the Math

Because Wolfram|Alpha’s purpose is to do work for you using objective facts, it’s really no good at taking you to quirky websites where you’ll find dancing hamsters and the like.

In fact, what we’ve found in focus groups and follow-ups with early beta users is that they find Wolfram|Alpha disappointing at first, when they are just playing around, but a bit later, when they have an actual problem they actually want solved, suddenly they realize just how valuable the site is. It does much better when you’ve got a real problem than when you’re kind of stumbling around wanting to be entertained (for that I recommend YouTube or Digg).

One large class of “darn, I have a real problem” problems is homework. And basically, if you have math or physics or chemistry homework, it’s done. Sorry, teachers, but get used to it. Say you’ve got a fairly mean math teacher and you’re asked to integrate

and show you some plots of the result for good measure.

Wait, you have to show the steps? Use the “Show steps” button. 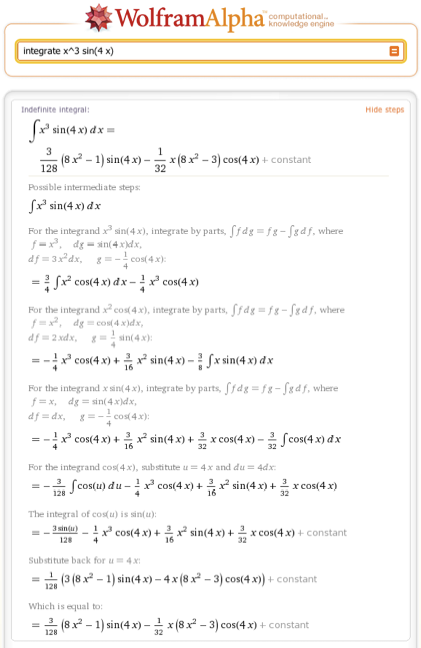 OK, it may not be much fun, but I think it’s safe to say that for most people, it’s more fun than doing that integral yourself by hand. Wolfram|Alpha: It’s more fun than having your teeth pulled!

But seriously, in case you’re a teacher and wondering if this is the apocalypse: well, in some ways yes, but keep in mind that whether you knew it or not, students who have had access to Mathematica have been able to do this kind of stuff for the past twenty years. Progress happens, and Wolfram|Alpha is essentially just leveling the playing field, giving everyone free access to the kind of power that only a few have had before.

Another example: A couple of weeks before the site launched I got an email from another editor at PopSci asking if I could help with a question that had come up during research for a story. The question was, if you used 121 exajoules of energy over the course of a year, how many gigawatts of continuous power would that represent? 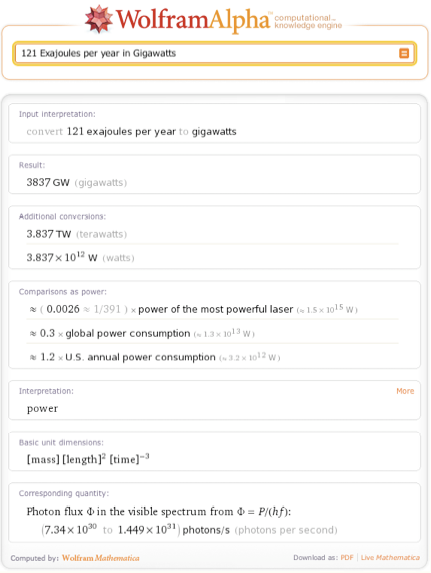 This is exactly the kind of actual problem that Wolfram|Alpha does very well at. Not only does it give you the answer, it tells you some useful comparisons, for example that this quantity is 1.2 times the U.S. annual power consumption. Since, unbeknownst to me, the story they were working on involved the projected future power consumption of the U.S., this was very good confirmation that the number is right, and not off by a factor of a thousand or something.

Over the last week we’ve seen the reporting on Wolfram|Alpha deepen and broaden, and I’m very happy to see that, by and large, people get it. They’re understanding that this is something completely new, it’s not what anyone expected, and although it’s rough around the edges and far from complete, it’s obviously an interesting project. (Of course, there are always the standard “you’re all idiots” comments from the people who have never actually done a complex project themselves, but really, even on some of the nastier sites, I’ve been surprised at the number of positive comments. It’s way above average from what I can tell. Maybe because we do their homework for them.)

And for us this is a marathon, not a sprint. One reason we brought Wolfram|Alpha live at this point is that we thought we’d gone about as far as we could without contact with the public. For example, the degree to which Wolfram|Alpha can understand natural language queries will improve hugely as we start to analyze and pick apart the syntax of the countless millions of real live queries we have gotten from the public just in the last week, paying special attention to the ones that failed. The language parsing will improve, and we will add new data sets to cover areas we are currently missing. (Yes, sports scores are on the list!)

Wolfram|Alpha is here to stay, and it will keep getting better. In the meantime, I should be able to return to do another column next month. I’m thinking about taking an X-ray picture of my hand using a roll of Scotch tape.