To Deflect Asteroids From Earth, Deploy Paintballs By The Ton

An MIT grad student found the coolest possible way to veer an asteroid off course. 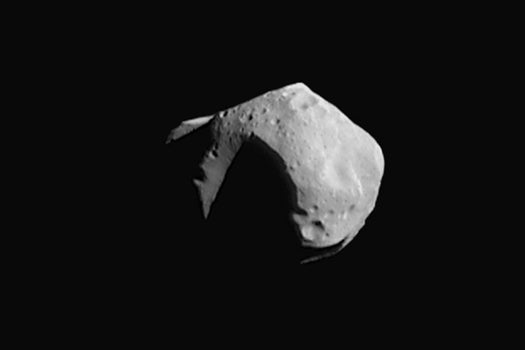 We can’t do much to deflect a hurricane, but we may have a pretty good defense against asteroids. A particularly pale asteroid could reflect so much sunlight that the photons bouncing from it could create enough force to steer it away. All we’d need to do is ensure that any asteroids coming our way are bright white. MIT graduate student Sung Wook Paek’s solution is to blast incoming offenders with pellets full of white paint.

Paek’s strategy is fairly simple: Five tons of paintballs full of white powder would be launched towards an asteroid from a nearby space craft, 20 years in advance of a possible collision with Earth. The force of the pellets hitting the object will push it off course, but also the reflectivity–the albedo–of the white paint would increase, and over time the photons bouncing off the surface would also force the asteroid away from our planet. How has no one ever thought of this before?

This project, which would would’ve made a killing at any public school science fair, seems to be worth its weight in paint. It won the United Nations-sponsored 2012 Move An Asteroid Paper Competition, competing against ideas including nuclear detonation on the asteroid and launching a projectile to collide with it. Those scientists, undoubtedly, were just thinking too hard.

For his calculations, Paek used the asteroid Apophis as a theoretical test case. We might need his strategy really soon, because astronomical observations say that the asteroid will come close to Earth in 2029 and again in 2036. Paintball guns at the ready!