It's the first time scientists have obtained 3-D information about a star's death spiral and offers a hint of our own sun's far future. 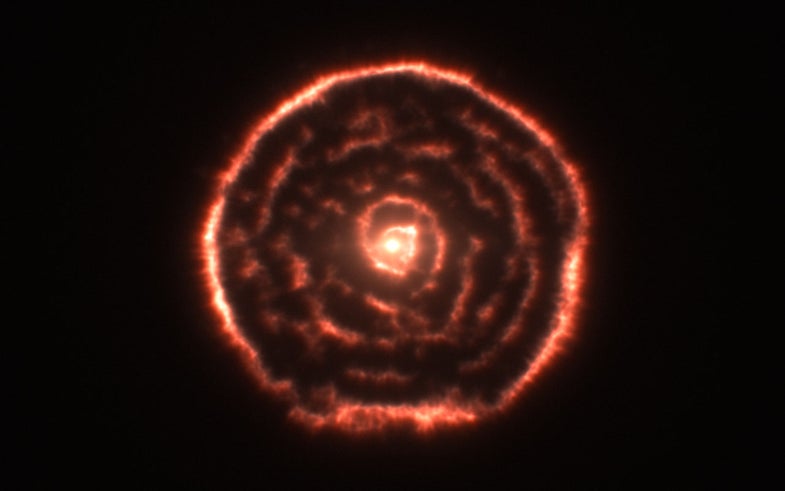 Observations using the Atacama Large Millimeter/submillimeter Array (ALMA) have revealed an unexpected spiral structure in the material around the old star R Sculptoris. This feature has never been seen before and is probably caused by a hidden companion star orbiting the star. This slice through the new ALMA data reveals the shell around the star, which shows up as the outer circular ring, as well as a very clear spiral structure in the inner material.
SHARE

Astronomers using the ALMA telescope have found an unusual spiral surrounding an elderly star, and they believe it was caused by a hidden companion orbiting the dying red giant. This is the first time anyone has found such a structure along with a spherical outer shell, astronomers report this week.

The star, R Sculptoris, is called an asymptotic giant branch star, a type that starts out anywhere from about the size of the sun to 8 times the size of the sun. (The sun will also become an AGB star when it grows old.) Red giants like this spew huge amounts of dust and gas as they die, providing the raw materials for new stars, planets and us. Shells of this material sometimes encircle the stars, but this is the first time scientists have seen a shell and a spiral flowing out of the star. The spiral probably formed under the influence of gravity from a nearby companion, which is unusual, astronomers said.

“In the near future, observations of stars like R Sculptoris with ALMA will help us to understand how the elements we are made up of reached places like the Earth. They also give us a hint of what our own star’s far future might be like,” said study co-author Matthias Maercker. The research paper describing the spiral will be published this week in Nature.