FYI: How Long Can a Brain Live in a Dish?

Scientists have isolated the brains of dogs, cats and monkeys and kept them alive for short periods in one way... 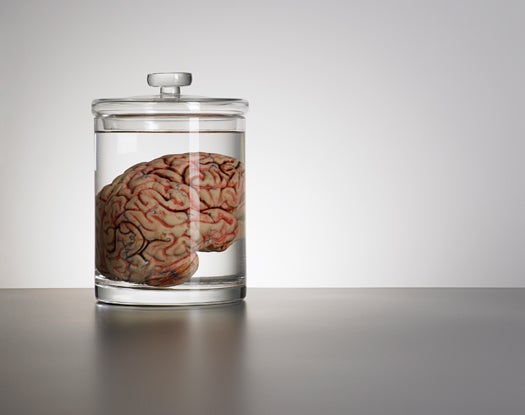 Scientists have isolated the brains of dogs, cats and monkeys and kept them alive for short periods in one way or another. But the most successful “whole-brain preparation” of a mammal was developed in the mid-1980s. A neuroscientist at NYU Langone Medical Center named Rodolfo Llinás came up with a way to keep the brain of a young guinea pig alive in a fluid-filled tank for the length of a standard workday.

To begin with, Llinás and his colleagues anesthetized the animal, opened up its chest, and cooled its brain by injecting cold saline into the ascending aorta. After extracting the brain from the skull, the researchers tied it to the bottom of the tank with some thread and surrounded it with glass beads, so it wouldn’t slide around. They kept the brain alive by injecting a solution of sugar, electrolytes and dissolved oxygen (among other ingredients) directly into one of its vertebral arteries. Guinea pigs turned out to be a good animal for this preparation because their vertebral arteries are accessible and because their brains are small enough to handle—but not too small for fine dissection.

Llinás’s preparation allows for the brain to be poked with electrodes, injected with drugs, or otherwise studied from any angle with all its circuitry intact. But there are only a handful of labs that still use this approach; many physiologists do experiments with whole, living animals or slices of brain tissue kept alive in a dish instead. “The preparation is difficult and expensive to maintain as a model system for brain study,” says University of Alberta neuroscientist Clayton Dickson, who learned the method in Italy but has since abandoned it. “It requires a dedicated, continuous and persistent research team to keep it going.”

Ask Us Anything
experiments
history
september 2012