A synthetic blood substitute is something of a holy grail in medical research. Many potential synthetics have been tried–DARPA has... 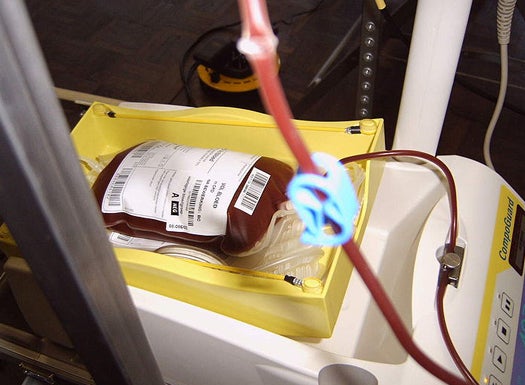 Tamara Coakley arrived at a Melbourne hospital very bad shape. A car accident left her with a damaged spinal cord, collapsed lungs, a fractured skull and various traumatic injuries. It also left her clinging to life with a dangerously low amount of blood in her body, too little to oxygenate her tissues effectively.

Complicating matters further, Coakley’s religion dictated that she could not receive blood transfusions (synthetics, however, do not carry such a taboo). So in an 11th hour bid to save her life, a synthetic known as HBOC201–a hemoglobin-based oxygen-carrying synthetic containing a molecule derived from cow plasma–was flown to Australia from the U.S. and 10 units were injected into Coakley’s body. Against the odds, she recovered.

That’s huge for synthetic blood as a treatment option. Consider: HBOC201 doesn’t require cross-matching or cold storage. It can sit on the shelf for up to three years. And it, or something like it, could go a long way toward solving the periodic blood supply problems that plague hospitals around the world, not to mention provide a blood loss solution in places far from hospitals, like in the third world or on battlefields.

Naturally any synthetic blood that might go into wider use needs to undergo seriously rigorous testing that goes far beyond one singular successful case, but Coakley’s survival marks a huge leap in the right direction in the search for a viable synthetic blood alternative.